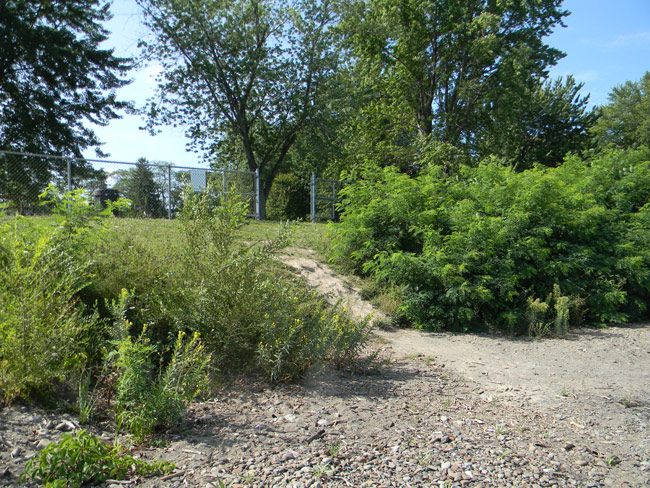 Work is expected to begin this week on a stairway leading to the beach area at Porter on the Lake Town Park. (photo by Terry Duffy)

A Youngstown teen is making his mark in the community, thanks to a project through the Boy Scouts of America.

TJ Maries of Youngstown Troop 829 is a Boy Scout earning honors through a project at Porter on the Lake Park that will build a stairway down to the beach.

"It takes a lot (to become an Eagle Scout)," said Maries. "You have to start from Webelos, then you have to work through four or five ranks in between ... (as well as) specific badges and a large community project, and mine is the stairway."

These community projects are thought up and carried out by the Scout.

"(The project) could be anything," said Maries. "One of our staff built bat nests for behind Lewiston-Porter (schools), and another renovated housing structures."

Maries' interest in the park, however, was sparked by other Scouts before him.

Although it is his project, Maries has not handled this undertaking alone. The Porter Town Board, which has been working with Reese and the Porter on the Lake Park Committee throughout the process, stepped forward, approving $1,639.21 in materials funding for the project at its Monday meeting. The town also handled the preliminary engineering studies en route to acquiring the necessary permits from the state Department of Environmental Conservation to allow the work to proceed.

"It's a very good project," said Town Supervisor Mert Wiepert, offering the board's praise to Maries for his effort.

Maries says he anxious to get the job going.

"I've got my Scout leader as well as my entire troop ... and friends to volunteer and help out," he said. "We're getting tools from our Scout leaders and we have an excavator coming in, which was approved by Bob Reese. But it's all hands-on work."

While strong, Maries feels most of his support doesn't come from his friends and fellow Scouts, but his parents.

"They're so keen on me finally reaching the rank of Eagle," he said. "Only a small percent of Boy Scouts in America reach it. If I need help or anything, I just have to ask."

Maries told the board Monday he expected to have the project concluded by the end of the month, in time for the upcoming Labor Day Festival at the park.
Categories
NFP Sentinel