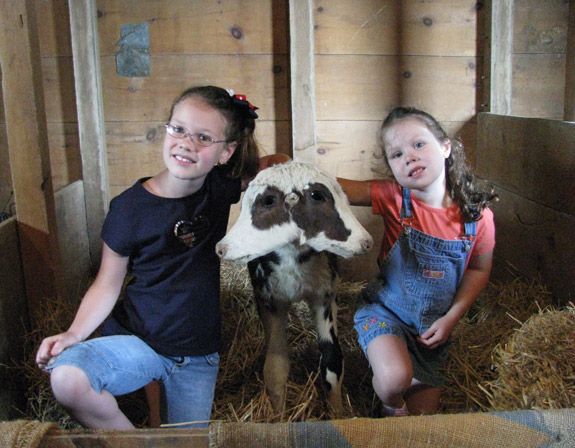 The two-headed calf in the barn is always a hit with youngsters who visit the Sanborn-Lewiston Farm Museum at 2660 Saunders Settlement Road. The former local resident and the rest of the regular displays will be joined by numerous special events and activities on Saturday, Aug. 14, when the Sanborn Area Historical Society presents its annual Farm Festival at the museum. Events will run from 8 a.m. (pancake breakfast) to dark (fireworks). In between, there will be a pie-eating contest, tractor parade, pedal tractor race, watermelon eating contest, flea market, bake sale, artisan demonstrations, car cruise, produce vendors, sand castle demonstration, Civil War re-enactors and a concert by Elvis impersonator Terry Buchwald. (photo by Susan Mikula Campbell)

Many new events at Farm Festival

The Sanborn Area Historical Society is hosting its sixth annual Farm Festival on Saturday, Aug. 14 at the Sanborn-Lewiston Farm Museum at 2660 Saunders Settlement Road. Thousands are expected to attend this year for displays, demonstrations and activities celebrating farms.

"We usually have around 4,000 people (attend)," said Linda Jackson, curator of the Sanborn-Lewiston Farm Museum.

Among the old favorites returning, such as a blacksmith artisan and Civil War re-enactors, there are a few new activities and events in place for this year.

"Our biggest new event is a concert by Elvis impersonator Terry Buchwald," said Jackson. "We're hoping to get a few more people (attending) now that we have the Elvis concert." The Elvis concert replaces the dance held in previous years. The concert will be free of charge and held from 6 until 9 p.m.

The tractor parade, while not a new event, will be handled differently this year.

"We're going to have them come in front of a review stand and give information on each," said Jackson.

In addition to these events, there will be a flea market, bake sale and other activities, such as the museum's displays.

"They seem more into the antique tractors and farm equipment," said Jackson, when asked about the crowd's favorite event.

"The museum's collections are from local people," said RoseMary Warren, a member of the historical society who moonlights as Mrs. Sanborn. "It really brings back memories."

Warren's character of Mrs. Sanborn appears every year at the Farm Festival to greet people.

"I always dress up in funny clothes and say I'm the prettiest married woman in Sanborn, but there's not much to choose from," said Warren. "Everyone is so friendly, and (the festival) brings in people out of the area and really shows them what Sanborn has to offer."

While there are plenty of things to occupy the adults, kids also can partake in a lot of festival fun.

"We have a lot of free things for kids to do," said Jackson. "We have the world's largest sandbox ... and a boat float ... a huge trough of water with (hand-held) wooden boats run by rubber bands."

"There are very few things a family can do that are free (elsewhere)," said Warren.

The festival begins at 8 a.m. with a pancake breakfast and runs all day until the fireworks are done shortly after 9 p.m. Admission and parking are free and on the grounds of the museum with overflow parking at West Street School. Bus shuttles to and from the festival will be provided.