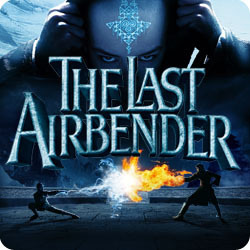 *What you are about to read is a cinematic review. Each movie is critiqued based on its rating-pending (PG or R), Genre (Comedy or Thriller), the acting, the score, the plot, and the overall quality of the movie. Hence, just because there are explosions, blood, or you think George Clooney/Megan Fox is "hot" does not mean it's a good film. Or does it. ... You be the judge. *

Based on the cartoon series of the same name, the world is divided into four kingdoms, each represented by the element they harness.

Peace has lasted throughout the realms of Water, Air, Earth and Fire under the supervision of the Avatar, a link to the spirit world and the only being capable of mastering the use of all four elements.

One hundred years pass after the last young avatar, Aang (Ringer), disappears, and current Fire Lord Ozai (Curtis) continues to conquer and imprison anyone with elemental "bending" abilities in the Earth and Water Kingdoms, while siblings Katara (Peltz) and Sokka (Rathbone) from a Southern Water Tribe find a mysterious boy trapped beneath the ice outside their village: Avatar Aang.

Swearing to protect the avatar, Katara and Sokka journey with him to the Northern Water Kingdom in his quest to master "waterbending" and eventually fulfill his destiny of once again restoring peace to the world. But as they inch nearer to their goal, the group must evade Prince Zuko (Patel), the exiled son of Lord Ozai, and Commander Zhao (Mandvi), the Fire Nation's military leader.

I had the distinct pleasure of watching this film with three other people. One, who, like me, has never watched the cartoon series, and two others who are die-hard fans of this original cartoon program. It's already difficult to replicate a TV series that a certain audience loves, but to write a two-hour movie based on an entire season is a whole other animal to conquer. And M. Night, you just got slaughtered.

The movie tries so hard to educate the audience about the cartoon, on the meaning of the "Benders," and to fall in love with their heroic avatar. But they throw so much information and rush every mini-plot that you just don't care anymore and can't wait for the special effects to happen.

Then the worst happens.

The special effects suck just as much as the plot does. I honestly gave this movie a real try for my liking. I like M. Night. Maybe not his last two feature films, but I like him. I even had "Avatar" nerds with me to help me understand this movie better. And they were just as disappointed, if not more so. This film lacked suspense, drama, action and any type of interesting plot (whether you are 13 or 31). The only reason I'm scoring it as high as I am, is because Noah Ringer (the cute little avatar) really did a good job. But you, Mr. Night, please come back to good filmmaking.

That is, if your favorite animal is the giant flying dog from "The Neverending Story." Other than that, you'll hate this movie.