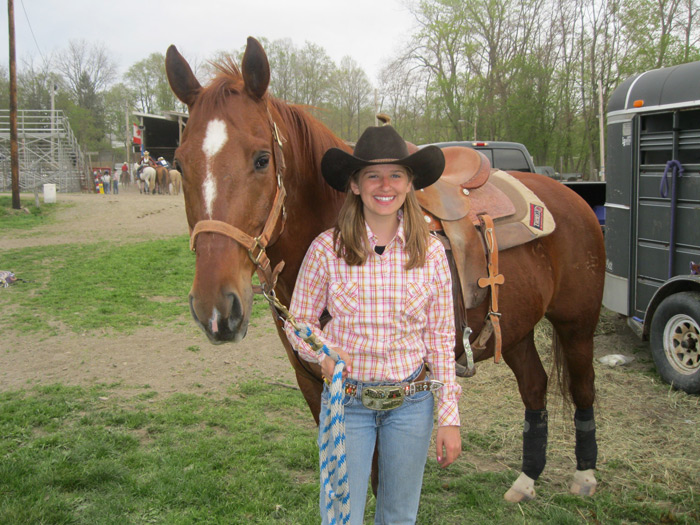 Mary Irving of Grand Island appears to be a normal high-schooler ready to take on the challenges of her junior year. When contacted to set up an interview, she was busy with driver's education classes until the afternoon. Apart from the "normal" high school activities, the young Irving has excelled in something quite extraordinary

Irving has earned a position on the New York state high school rodeo team and will travel with fellow teammates to Gillette, Wyo., from July 18-24 to compete at the 62nd annual National High School Finals Rodeo. Irving placed fourth in pole bending at the state-level, earning her a spot on the national team. For those non-rodeo aficionados out there, pole bending is a timed event where a horse and rider weave through a path around six poles arranged in a line.

Irving's personal favorite is the pole bending, but she is no one-trick pony either. She also trains in barrel roping, goat tying and breakaway roping.

"I got started at the Diamond B stables in Pendleton where I bought my horse, Maverick. They were very into barrel racing and other rodeo events," says Irving. She won the state competition last year and went to New Mexico for the finals. She flew to the competition and had to use someone else's horse to compete. This year, however, she is trailering Maverick to the finals in Wyoming, which will be a big advantage.

When asked about what her friends and classmates thought about her unusual sport, she said, "They think it's pretty cool. Some of them come out and support me."

Featuring more than 1,500 contestants from 41 states, five Canadian provinces, and Australia, then NHSFR is the world's largest rodeo. In addition to competing for more than $200,000 in prizes, NHSFR contestants will also vie for more than $350,000 in college scholarships.

Like any rising junior in high school, Irving is "not sure yet" about her plans for college. She says many colleges have equestrian clubs, but she is more interested in joining a collegiate rodeo team out west.

To watch Irving and all the NHSFR action live, visit Horsecity.com and click the audio webcast.