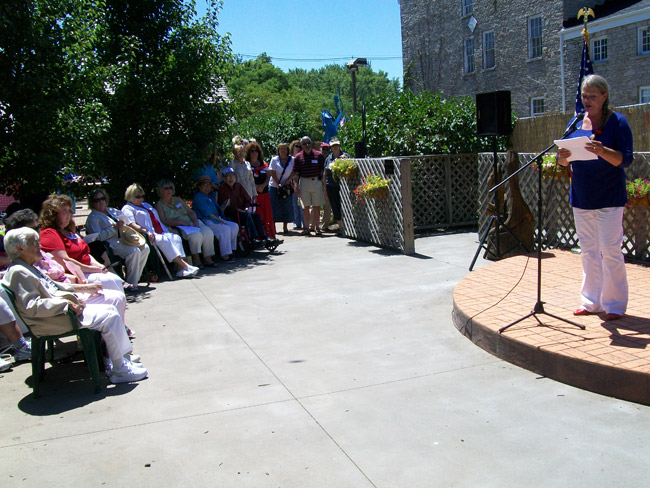 Eva:   Introduce myself....  welcome to the Lewiston Peace Garden!

First, I'd like to introduce Julie Patel.  Julie was hand picked by Marvin Hamlisch as one of the top 4 finalists for the Buffalo Philharmonic "Idol" competition.  She performed in front of a packed house and got GREAT reviews!  Please stand as she sings the National Anthem....

Mayor elect Terry Collesano was born & raised in Lewiston and for nearly 40 years he has been a moving force, serving as Village Trustee on the Village Board.  He is very knowledgeable and passionate about preserving Lewiston's history.  He will lead us in singing the Canadian National Anthem.

On the cold, fateful morning of Dec. 19, 1813, barefooted Villagers were fleeing for their lives on Ridge Road when about 30 Tuscarora men came to their rescue and chose to fight against the British troops and their Mohawk brothers.  We have with us today a direct descendant of one of those courageous Tuscarorans.  Today, Francene Patterson will bless the Peace Garden in her native tongue....

I'd like to introduce the two Co-chairwomen of the Lewiston Peace Garden, Jacquie Lodico and Claudia Marasco.  Both of these amazing women are on the board of directors at Lewiston Council on the Arts.

Jacquie was the director of Niagara Council on the Arts for over 30 years and was highly respected in the art world all over WNY.   In the year 2000 Jacquie received the 1st Award for the Arts in New York State presented at Lincoln Center!  This award is now given annually in her name.  Jacquie mentored Irene & myself in the early days.  Lewiston Council on the Arts wouldn't be what is is today without her guidance and support.

Claudia is a former Counselor from the Niagara Wheatfield School District.  She is a forthright and brave community activist and is a member of the Lewiston Garden Club, Friends of the Library and the Historical Association of Lewiston.  Her contributions to the community have been acknowledged with the following awards: She was voted "Citizen of the Year 2010" by the Niagara River Region Chamber of Commerce, the Paul Harris Fellow Rotary International, the Benjamin Barton and Josiah Tryon Awards from HAL, YWCA Tribute to Women and was nominee for Women of Distinction by the NY State senate.  Always ready to lend a hand.... Claudia has made volunteerism a way of life in Lewiston!

Eva:  This man NEEDS no introduction...  He is a dear friend to so many of us, an exceptional human being and the person who polished our Village into the diamond it is today... I am forever your humble servant..... Our Former Mayor Richard Soluri!

Looking at this beautiful space, it's hard to imagine that anyone would object to the creation of a Village Courtyard. In 2001 we (at LCA) decided that a courtyard would be sooooooo much better than a parking lot!

Our past mayor, Dick Soluri agreed with us and even though the business community needed parking places, they wanted a courtyard more.  So... with funds raised from the Taste of Lewiston, we commissioned the brilliant, Canadian landscape architect, John Morley to create a plan for this space.

The initial partnership brought together the Village of Lewiston, GLBPA and the art council and we began fundraising. Sandy Hays initiated the "Buy a Brick" fundraiser, Irene got busy writing grants and the Village provided muscle power and support every step of the way.

Together we raised $85,000 and built the "bones" of this courtyard... brick and concrete work, electricity, plumbing, fencing, a decorative fountain and a public restroom.  Then came basic plantings... a thoughtful selection of low maintenance trees & shrubs.

In August 2005, the Historic Lewiston Courtyard was officially dedicated.  Although brick sales continued, progress slowed down UNTIL  Jacquie Lodico, Claudia Marasco and a handful of dedicated volunteers took the courtyard to the next level. They did their own fundraising and the Lewiston Garden Club came on board along with the Lewiston/NOTL Rotary Club.

Claudia donated that beautiful archway in memory of her family.  Then roses were added, along with perennials, flowers boxes and sculptures which really put the finishing touches on this space.  The original fountain was enhanced this year with a generous donation with Garden Fest funding.  The artist who created the fountain is here today.... Donna Ioverio!

Jacquie:  When the Bicentennial Art of Peace Garden Trail initiative was announced, we were ready with a garden that fulfilled all the requirements to become part of the binational effort undertaken by the Binational Economic & Tourism Alliance, Canadian and U.S. Community Partners and the International Peace Garden Foundation.

Claudia:  Their goal is to create a cross-border Peace Garden Trail throughout the Niagara Frontier territory of the War of 1812.  They want to commemorate the 200 years of peace that have existed between Canada and the United States since that war, and celebrate the lasting legacy to the longest undefended border in the world and the friendship between our two countries. Today's dedication establishes the Lewiston Courtyard as the Lewiston Peace Garden.  This garden is situated on one of the most important historical sites of the War of 1812.

Eva:  I'd like to introduce some of our Marble Orchard Players.  We'll start with Tim Henderson, co-author of the Marble Orchard who plays the part of Lewiston's Abolitionist, Josiah Tryon.... Kay Terryberry is the sad little Mary Agnes Barton, Bonnie Clark is the tragic Nina Starkweather, Jack Morgan is Entrepreneur Extraordinaire, Calvin Hotchkiss, Jerry Mosey is the charming Judge Sherborne Piper, and Sonja Jonsson is the undisciplined outcast gypsy queen, Macy Boswell.

Now there will be a dramatic presentation featuring Sandra Maslen as Nancy Gillette in a vignette from the Marble Orchard 1812. She will be accompanied by 14-year-old violinist, Anna Nicolia.

Lee Simonson will speak... no intro

One of the most consistent supporters of Lewiston is NYS Assemblywoman Francine DelMonte.  She gives so MUCH to this community and she helped BUILD this courtyard.  Thanks to her generosity, we have brought Lewiston's Underground Railroad history to life in the Marble Orchard.  Francine has the energy of ten women.  She is a hard-working public servant, a woman of integrity and nobody is more devoted to this community than she is.

Bob Giannetti is also a member of the art council board of directors.  He is an award winning, International poet of distinction.  He owns Bob's Olde Books right around the corner and has traveled the world.... recognized and honored for his poetry.  We will now hear a poem that was inspired by Friendship Rising and written for the Peace Garden Dedication today....

In the garden, hope is clear and bright-

springing from earth in stirring breeze,

under sky afire and in sustaining rain.

In the consuming smoke and din of daily commerce,

the serpent that slithered through Eden lurks,

ready to blight the glory, blast the bloom-

for good and for ill, the unforeseen forever looming,

the misty memory of Eden's expulsion echoing in enterprise.

Undeterred, we plant seeds of amity between industry and nature

in gardens like this, peaceful places, where freedom's chords

intone not the groan of war, the shriek of greed,

the spilling and waste of earth's precious store.

On either side of a river, two nations long at peace

seek the solace of the spirit's plenty in sun and in shade,

this garden of friendship an emblem of that quest,

its  unfurled colors a floral flag of hope-

a hope whispering in winds across the globe,

that the glory of renewal can flow through sun and rain

to the very ground we stand upon

and flower into a new Eden of the mind.

Where freedom and friendship bloom

Where freedom and friendship bloom

Eva:  That concludes our program for today.  Thank you all for coming to this celebration of friendship. Please stay and enjoy some light refreshments.  Have a safe and happy weekend!