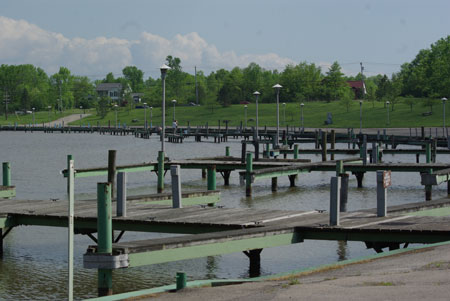 Big 6 wait is over, Thompson says

Boaters who want to use the temporarily closed Big Six Mile Creek Marina may see a resolution on the horizon.

Funding for repairs at the Big Six Mile Creek Marina on Grand Island were included in a budget resolution passed in the New York State Legislature. The marina has been closed for about a month awaiting funding for emergency repairs.

According to State Sen. Antoine Thompson's Buffalo office, the funding for the emergency repairs is contained in the governor's budget extender, which was passed Monday by state legislators.

Some people looking to use the marina's dock and slip with the arrival of warm spring weather in May paid their fees in full, but were not allowed access to the marina.

"It was not fair for the people who have already paid their boating fees to be denied the opportunity to enjoy summer boating," Thompson said. "The Big Six Mile Creek Marina had been closed for boating for nearly a month, but now the wait is over."

David Clark, park manager in charge of Big Six, said unusually low water levels earlier this year revealed steel pilings that support the docks had suffered "extreme corrosion and deterioration to the steel under the surface of the water."

The decision was made to temporarily close the marina while awaiting funding for emergency repairs. Clark said the contractor has been selected and the material to make the structural repairs to the steel underwater has been purchased, but the funding to complete the work was held up in the office of the state comptroller.

"Until the structural steel on the docks gets repaired, it's been deemed unsafe to tie up the boats to the docks," Clark said.

Some who paid their fees in cash to use the marina were left high and dry while they awaited a refund.

Clark said that last year more than 100 boats rented slips at Big Six, and more patrons would launch a boat at the launch ramp.

Thompson also has been notified by Gov. David Paterson's office that his efforts to get the Department of Transportation to complete the mowing along West River Parkway will take effect immediately.