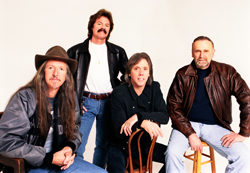 Pollstar, the Internet's No. 1 concert information site, has ranked the top 20 free summer concerts for the greater Buffalo area. Artpark has eight of the top 10 spots - each an act performing as part of the "Tuesday in the Park" series.

"With the support of the Town of Lewiston, First Niagara Bank, and all of our other sponsors, Artpark has been able to attract the strongest, most popular lineup of bands for the summer 2010 series in our history," said George Osborne, Artpark & Co. president. "This series, together with our more eclectic ‘Coors Light Wednesday Series,' and our numerous and varied Mainstage shows, have come together to solidify Artpark's position as the premier summer performing arts venue in Western New York."

Osborne said Pollstar's numbers reflect the average box office gross receipts reported during the past 36 months for all performances by these bands.

Fred Heuer, assistant vice president for marketing at Niagara University, said he enjoys "Tuesday in the Park" at Artpark.

"You can't beat the price; it's free," he said. "The bands are great and the venue is great."

Heuer, who books musicians for the Live Music Series at NU, said he's looking forward to the CCR show.

"I hear they're very, very good live," he said.

Stephen Gorney, 16, a worker at Lewiston's High Fidelity record store, said most of the Artpark bands were popular before he was born. Still, "It's a good concert (series); they put up some good shows," he said. "I know a couple bands."

Singer and instrumentalist Tony Petrocelli of Lewiston Music was amazed Artpark could book such an all-star lineup given the venue's reduced state funding.

"I think it's great because it's extremely well-rounded," Petrocelli said. "It's acts the whole family can go to."

He's looking forward to seeing the Doobies, Little Feat and, "I would say Derek Trucks. Definitely."

Plus, he's looking forward to a few "Tuesday in the Park" drop-ins. In previous years, Chris Isaak and members of the Tragically Hip and Trisha Yearwood's band visited Lewiston Music.

Pollstar is the only trade publication covering the global concert industry. Wikipedia lists it as "the world's largest resource for international concert tour information."

Artpark's 'Tuesday in the Park' lineup:

July 6
The Guess Who

July 27
George Thorogood and The Destroyers