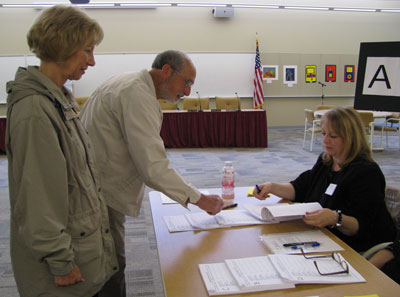 Robert and Susan Alessi of Wheatfield sign in to vote at the N-W Adult Learning Center. (photo by Susan Mikula Campbell)

No surprises in N-W election

There was no contest for the two open school board seats. Incumbent Kathy Fleming received 683 votes and newcomer Michael Brock received 649 votes.

The traditional chicken barbecue sale to support the Niagara-Wheatfield Sports Alliance was set up near the door of the high school's Adult Learning Center. Only 28 of 255 dinners were left at 5:50 p.m.

"We'll sell out for sure," said Bob Cliffe, Wheatfield supervisor and NWSA president, noting that the barbecue funds help the NWSA provide two $500 scholarships each year.

After voting, John Olear of Wheatfield picked up dinners with the help of his daughter Allyssa, a fourth-grader at St. Christopher's School.

"I teach at Sweet Home, so I know voting's important; it's for the kids," he said.

N-W senior Matthew Keener recently turned 18 and cast his first vote in the N-W election. He wanted to make sure programs for students, like the new after-school academic Twilight program, didn't face cuts.

"I figured I'd come and help them out," he said.

Robert Alessi of Wheatfield and his wife, Susan, also were among the voters. He figures he's missed just two elections in about 50 years.

"I vote in everything - primaries, school boards. ... It's my right," he said. "It's truly important. I think more people should do that."