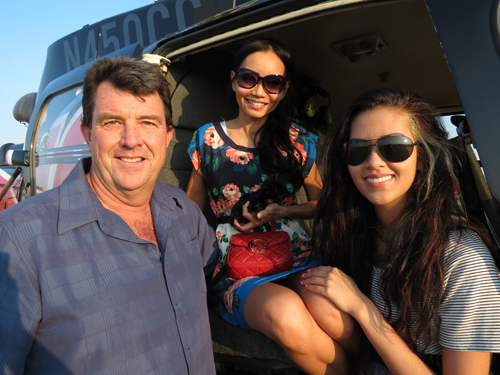 Craig Hosking, left, poses with his wife, Kelly Mac (center), and his stepdaughter, Michelle, inside the "Need for Speed" helicopter. (photo by Joshua Maloni)

Consider: By day, Hosking is an in-demand businessman, surrounded by lovely women and working on large-scale projects à la Bruce Wayne. By night, he oversees crime-fighting while hanging out with Christopher Nolan and flying a souped-up helicopter he built.

Of course, we know Hosking is not the Caped Crusader. What he is, as he said, is the "luckiest kid in the world."

Hosking is in demand as a Hollywood stunt coordinator and pilot. He's not Bruce Wayne, but he did work with Christian Bale (who portrayed the troubled crime-fighter) in Nolan's "Dark Knight" trilogy.

And the lovely women? Sure, sometimes Hosking can be seen with the likes of Anne Hathaway (Catwoman in "The Dark Knight Rises") and Marion Cotillard (Talia al Ghul), but more often than not he's surrounded by his wife, Kelly Mac, and his stepdaughter, soon-to-be Lewiston-Porter High School senior Michelle.

Hosking and his family flew into town this week from their part-time home in California. He was on his way to Michigan, where he was to finish work on the Steven Spielberg-produced film "Need for Speed" (which, ironically, features the other Bruce Wayne, Michael Keaton). In between meetings with friends, Hosking spoke of how he entered Hollywood's elite inner circle.

It all began in Utah, where he said his childhood wasn't all that different from what it might've been had he grown up in Western New York. There was, however, one notable difference.

"It's like around here a farm kid on a tractor, you know? It's just our tractor was a helicopter. So we got to start at a really young age."

Hosking didn't just learn to fly. He also discovered how to create aircraft of his own.

"He built an upside-down helicopter, too," Mac interjected.

"Yeah, before I got into the film business, I was in the air show business and I had a pet special Aeromatic airplane that I built that has wheels on top and wheels on the bottom. It can take off and land upside down."

He retired from air show business in the mid-90s, right as his film career was taking off.

"As a kid growing up, I grew up in Salt Lake City, Utah, my dad had a helicopter charter company, which is, of course, how I got started," Hosking said. "The generation before me, Hollywood pilots, would come to Utah and they'd use my dad's helicopter to work on movies around Moab and Grand Canyon ... Red Rocks, Monument Valley, Zions - all those national parks there are beautiful places to film; the salt flats; things like that. So those guys would come use my dad's helicopter, so I got to know them. And I could see there was going to be a big opening in a generation, because the guys were my dad's age then. So, in '87 I moved to L.A. full-time and started my film career."

"Well, it's an interesting combination," he said. "For me, I learned photography as a hobby, and flying as a profession - much the same as my father. My father started out as a photographer in the Army, and then he converted to flying. So it's kind of just in our blood. It's just what we do. We had a darkroom in our house when I was growing up. My dad, we would shoot our own photos and develop them. So, just a love of photography and a love of flying - it was just a natural to combine those.

"And so, when I moved to L.A. in '87, that was it. The first few times I went out on a job, I found that flying the helicopter and maneuvering for a shot was the same thing I would do with my camera if I was trying to line up a background or a beautiful reflective sun reflecting off the ocean as a ship passes through it. It's just camera composition, and I already knew that; I got it, because I was a photographer. So, my career progressed very quickly once the directors and producers and cameramen found out that I could really position - I had that sixth sense to position for a shot. My career took off pretty rapidly.

"It was just a nice combination of skills as a pilot and a cameraman."

While Hosking can't name one film he's worked on as his favorite - "There's been so many fabulous experiences," he said - two flight-related films stand out.

He cites the 1991 film "The Rocketeer" as a career-breakthrough.

"I got to work as the aero coordinator there, and I got to fly a lot of those old race planes - the Thompson Trophy race planes," Hosking said. "There was a Gee Bee that I flew - and Gee Bee had a nasty reputation, and everybody who'd flown them had crashed them. Except Jimmy Doolittle. And Jimmy Doolittle was still alive at the time. And so when we started filming 'Rocketeer,' I went and talked to him about the Gee Bee. And he said, 'Well, if you can fly it and not wreck it, that will make two of us on the whole face of the history of the Earth.' And I was able to fly it and not wreck it. But, boy, it was a vicious, vicious, difficult airplane to land."

"He's an epic, epic filmmaker," Hosking said. "In my mind, it's he and Spielberg who are really the kings of Hollywood. And Chris is just a masterful filmmaker. So, I've been lucky to be on his team for a lot of years, now."

"Right now is about as busy as it gets," he said. "We've been doing 'Need for Speed,' which is the one that we're leaving for tomorrow to go to Detroit. We're tailing off with that one - that one's just about to the end. We're just gearing up with three other ones, and we're able to juggle them."

Hosking is working with Nolan on "Interstellar"; with longtime Nolan director of photography Wally Pfister on "Transcendence"; and with director Michael Mann on an untitled cyber-thriller.

Mac, who rode with Hosking in his helicopter on their second date almost a decade ago, said, "I think this culture is very interesting. It's very fast-paced. (But) it's not as glamorous as we all think it is."

"There's so many people behind the scene that don't get the credit that they deserve, that work so hard," she added. "I've gone on location with him, and he's up before the sunrise, because they've got shots that they need to catch. And he's home, if I'm lucky and on location, he'll be done by 8 o'clock. Twelve, 13-, 14-hour days. It's reshooting over and over and over and over again. He's definitely the best in the business."

When Hosking hits the road, his friend, Town of Lewiston Justice Hugh Gee, often accompanies him. The two of them have worked as a team since 2010, when Gee retired after 32 years with the Niagara Falls Water Board.

"I retired in December; had the retirement party in January - Jan. 20, actually. (Craig) showed up from California. He showed up at the retirement party, and he came in, he said, 'This is how I find out you're retired?' And Jan. 28 I was working on my first Ram truck commercial in the Mojave Desert," Gee said. "The next two days worked a Ford Fusion commercial in another part of the Mojave Desert. And both of those commercials played in the Super Bowl the following week."

The judge, and Hosking's other friend, Chris Strassburg, both work as local safety coordinators on the production sets.

"If I had done this job 32 years earlier, I never would've went to work," Gee said. "I could've been doing this my entire life." 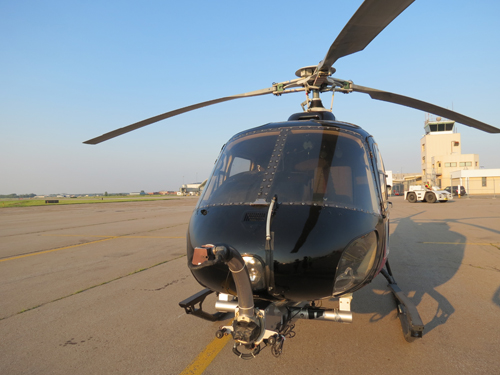 A helicopter from the upcoming film "Need for Speed." (photo by Joshua Maloni) 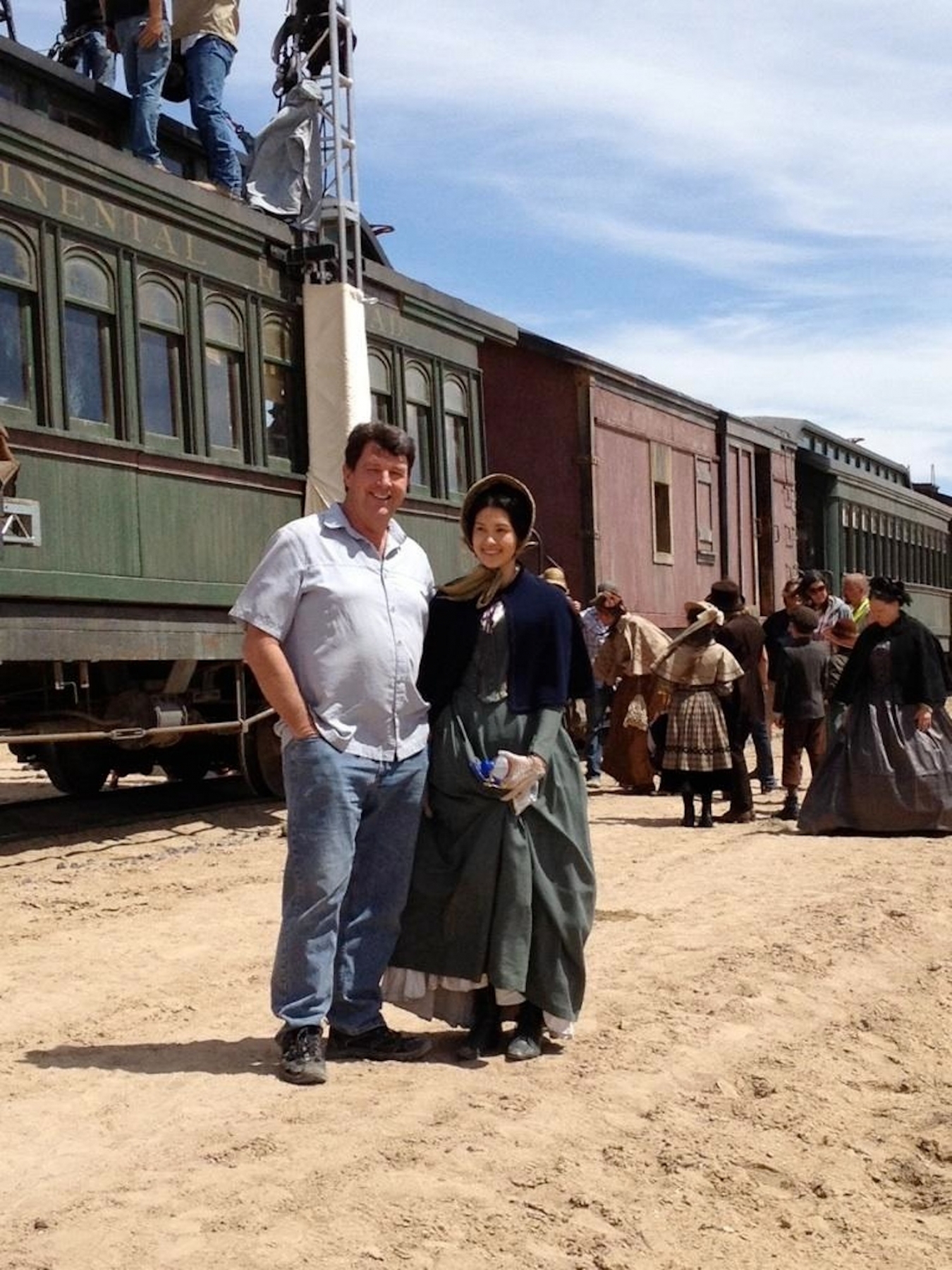 Craig Hosking stands next to his stepdaughter, Michelle, on the set of "The Lone Ranger." Michelle, 17, was an extra in the film, which premieres next week. (submitted photo)