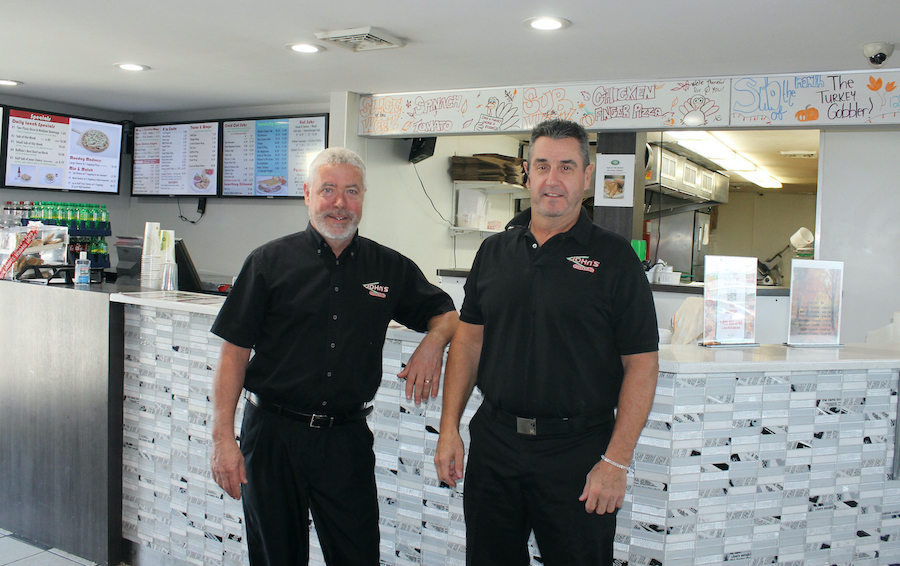 The Dispatch checked in on John’s Pizza & Subs owners Gene Mongan and Kurt Raepple as their business was coming off a giant lake-effect snowstorm and into a busy holiday week.

The holiday and the weather brought in a blizzard of customers, too, for the business partners who are celebrating their 40th year as proprietors of John’s. A steady flow of customers is not unusual on any given day, though, for their fleet of four restaurants, one on Grand Island, two in Tonawanda and one on Campbell Boulevard in Getzville.

Each restaurant is popular and has indigenous touches that keep them in tune with the community they serve.

The secret to their success?

“We keep doing what we believe is right,” Raepple said. “And that’s taking care of our customers, taking care of our employees, buying the best products we can, trying to do the basics – just the basics. We’re pretty focused on that. We’ve been pushing for a long, long time. It’s hard, but we believe that continues to help us in any circumstance – whether it’s the booming economy or recession … we think that’s the best route to go to keep a steady business.”

“We have great customers, great employees,” he added.

“We’ve been blessed with some amazing people on both sides of the counter, he said. “Honestly, it’s amazing we get around to each of the four locations, and we have a lot of people that come to multiple locations. They’re in this area for one (of their restaurants) or maybe they’re a contractor and traveling.”

A significant number of the John’s Pizza & Subs crew has been with the business for 15 or 20 years or more. One of the longest-serving managers has been on the job for 34 years.

Customer loyalty is solid, too. Mongan said he has pointed out to younger members of the staff that some of their customers have been coming to John’s for 40 years and have made John’s Pizza & Subs a family tradition.

Raepple noted a customer from Canada who recently gave John’s a good review. As a teenager, that customer used to come to the Buffalo area with his parents, stay at a local motel and order 50 wings and a bunch of steak hoagies from John’s each time. He said the customer told him, “This place is just a staple in my life.” His mother and nephew are also devoted fans of the restaurant.

Mongan and Raepple had a lot in common even before they became business partners. The two men, who both turned 60 this year, were born in the same hospital, one day apart, met in second grade and have been friends ever since. They’ve also played hockey together as kids and adults. Even so, as youngsters, they never talked about going into business together.

“We came from two very different paths,” Mongan said. His older brother, Mike, set an example as a restaurant manager, “I just watched him and saw his young career and I thought, ‘I like that.’ So, early on, I knew that would be my career path. Kurt, on the other hand, had been working in the insurance business and was still chasing his junior hockey career.”

Over the years, there have been changes in the restaurant business, but the partners say their philosophy of business has stayed the same.

“We’ve kept a pretty upbeat attitude about things,” Raepple said. “Thick and thin, we’ve budged through it and worked together.”

With four locations, there’s a lot to manage.

“We try to get into each store as often as possible,” Mongan said. “We both have a kind of a home base. Kurt’s at Niagara Falls Boulevard. Our offices are there. I’m at Campbell a lot. I have an office there.

“From there, we’re like water bugs … all over the place. I’d like to hit four stores in a day, but sometimes I hit six stores in a day – but we only have four,” he joked. “So I’m hitting the same store twice!”

As to customer favorites, their original chicken finger sub is legendary and has been widely imitated even by a fast food chain and in restaurants as far-flung as Florida – but it all started at John’s Pizza & Subs in 1982. It’s a creation that has brought them fame and devoted fans.

Of the imitators who try to duplicate their invention, Mongan said, “Everybody found out from us.”

At least two Buffalo books and a Manhattan food blogger have paid tribute to John’s Pizza & Subs for their invention of the chicken finger sub. Mongan owns both books that mention the famous sub, but Raepple quips to Mongan that he only has one of the books.

The partners said their personal favorite subs also include the royal (with sausage and capicola), the steak sub and the turkey sub.

John’s makes charitable contributions to the communities in which they have stores. With the store they opened at 2131 Grand Island Blvd., in 1989, they have been very involved in sponsorships and projects for both Young Life, a Christian group; and for Grand Island Little League.

Raepple and Mongan are family men, each with three children. Over the years, members of their families and nieces and nephews have contributed to the success of the business, and some still do.

They say that, in those years when their families were young, they were fortunate to have the help of other very good partners in the earlier stages of their business. A mentor they credit as crucial in their developing business is Kevin Nedwick, a Grand Islander.

“We called him our silent partner,” Mongan said, noting he was very insightful about the business. “He worked for four different food service companies as our main supplier. We followed him to all four companies he worked for.”

“He gave us a lot of advice,” Raepple said. “He guided us a lot, told us what he was seeing out there, what he thought was important for us to do. He did everything he could to help us be successful.” He is retired now, yet “we owe him a debt of gratitude for all he did for us over the years!”