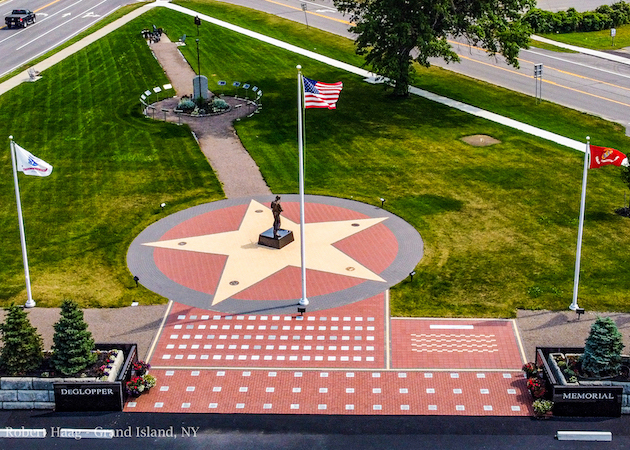 Seven years ago, several local veterans and town officials met in the Grand Island Moose Lodge to discuss developing a vacant lot. Located in the center of town, at the corners of Grand Island Boulevard and Baseline Road, they sought to build a memorial site for hometown hero and U.S. Army soldier Pfc. Charles N. DeGlopper – and all town veterans of the armed forces.

They agreed it was a worthwhile project, and formed The Grand Island VFW Post 9249 DeGlopper Memorial Expansion Committee. Subcommittees were established, meetings were set, and the process began to create a site where town residents and visitors could pay homage to Grand Island’s hometown heroes – while also raising the public’s educational awareness of the sacrifices made by those who have served, and the families they left behind.

A dedicated, determined and committed committee created a vision around Pfc. DeGlopper, who received the prestigious World War II Medal of Honor posthumously. He would be the memorial’s focal point, with a life-sized statue honoring his heroic actions. DeGlopper sacrificed his life during the early stages of the Battle of Normandy. His actions cost him his life, but saved his platoon on the beach in LaFiere, Manche, Normandy, France.

The committee agreed to expand and update the killed-in-action monument, and add unique monuments of each KIA – complete with their photo and biography. There would also be a Civil War tribute to the 68 Islanders who fought in that conflict, a Gold Star tribute to the military branches, and granite memorial walls with inscriptions of the names of past, present and future Island veterans. Members also agreed there would be areas designated for anyone to purchase pavers or granite stones to honor and thank veterans, family members or friends.

Through the generosity of the entire Island community, which proudly accepts this monument space as its own, more than $750,000 has been raised for what is phase one of a two-phased process. Along with financial contributions, in-kind donations from all types of individuals and businesses helped to keep the expenses low. Fundraising success allowed the committee to hire noted sculptor and artist Susan Geissler, who would meticulously construct the statue in her Youngstown studio.

In fact, “As we were doing research on this project, we learned about an application for federal memorial status, which would put Grand Island’s DeGlopper Memorial on the national map of veteran memorials,” explained Dan “Double D” Drexelius, the committee’s project manager.

But this all came with a cost. 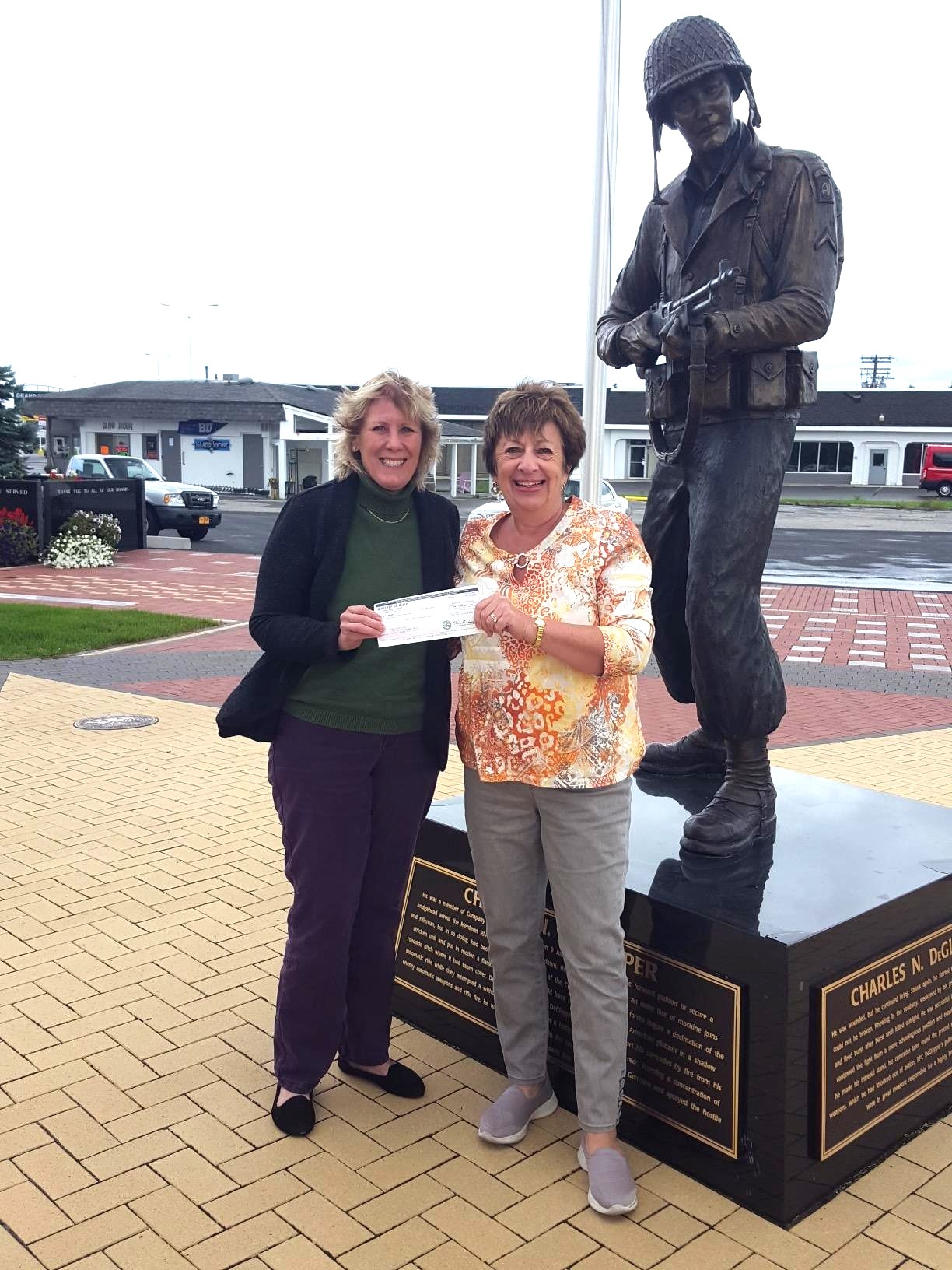 From the public’s standpoint, they might wonder why the DeGlopper Memorial Expansion Committee is still fundraising, since they saw the memorial unveiled during an elaborate military celebration on June 5, 2021.

“Our committee extends a heartfelt thank you to those community members and groups who have contributed to the project’s success so far,” said Elsie Martino, the committee’s secretary, and a tireless volunteer who has overseen the donations and grants received for several years.

“Our fundraising continues because we are working towards obtaining national monument status for the DeGlopper Memorial along with reserving funds for long-term maintenance,” she said.

Based on what has occurred in other communities with the prestigious national monument status, committee members believe such status here will lead to increased tourism opportunities for Grand Island. Before an application is submitted, the committee said the following is needed to complete the DeGlopper Memorial site:

√ A Purple Heart Monument (5-feet tall by 4-feet wide by 4-inch-thick granite, colorized with a carved eagle with the Purple Heart on both sides); cost: $40,000

The committee has learned an interesting lesson along the way about accepting grants from political leaders.

In June 2018, former New York State Sen. Chris Jacobs became the first government official to support the DeGlopper Memorial, when he presented an oversized check for $100,000 to the committee with the media present. A photo of his appearance is on the DeGlopper Memorial website. The committee knew it could not cash the large, foam-core check at its local bank. The senator said paperwork was submitted for the committee to receive a cashable check.

While waiting, they used the verbal donation of $100,000 from the state as collateral for a bridge loan to pay the sculptor, knowing a check would arrive soon.

But obtaining those funds has become a challenge since Jacobs left the Senate to become a U.S. congressman.

The check presentation was four years ago and, since then, the administrative tasks of tracking those funds has been tireless. The inability to find the correct area within the state government system required never-ending streams of paperwork to be completed, which has been daunting and time-consuming. Add the complications of the coronavirus pandemic to the mix, and it was difficult for Martino to find anyone to speak with for months.

“It has been a long process, but we are now talking to a person in Albany, and we continue to complete more and more paperwork. But I feel confident we will receive the amount promised to this committee for a memorial to our town’s World War II hero,” Martino explained. “Who would not want to support such an effort?”

He said, “Legendary Buffalo Bills Coach Marv Levy was once asked by a reporter if Sunday’s game was a ‘must win’ for the Bills. ‘No,’ Levy replied, ‘World War II was a must win. Sunday’s game was just football.’ Levy was right. Charles DeGlopper and his comrades saved the world from fascism, and it is only fitting that we erect monuments to memorialize their heroic deeds. I was moved by the unveiling of the DeGlopper statue last year, and was happy I could secure county funds to aid in its completion.”

Grand Island Town Supervisor John Whitney is excited about the prospect of the memorial earning national monument status. He said, “To honor a Grand Island native – a Medal of Honor recipient who gave his life in service of our country – along with recognizing all of our veterans in a park in the center of town – is a great asset.”

While Martino almost demands to stay in the background, committee members are lavish in their praise of her efforts on behalf of the memorial.

“Honestly, if it were not for Elsie’s sheer grit and determination, these government funds would never have come to fruition for us,” Drexelius said.

Former Deputy Supervisor Jim Sharpe said, “Had it not been for Elsie, we would never see the monies promised from New York state. Without a doubt, she greatly improved our chances to secure funding for the Charles N. DeGlopper Memorial. As a fellow veteran, we all owe her a great deal of gratitude for making this project come to fruition.”

Erik Anderson, who chaired the committee, used two words to describe Martino: “Organization and stability.” He added, “She did the job of probably four people and became the superglue that pulled everything together for us. From the moment she joined our committee, she helped get everything organized that we did not have organized, and she made sure we were completely organized for the dedication.”

The DeGlopper Memorial Committee continues to offer the purchase of inscriptions honoring loved ones, or expressing gratitude for those who have or are serving in the Armed Forces. Martino said there are a limited number of 12-by-12-inch granite stones; 4-by-8-inch and 8-by-8-inch pavers; and space on the Memorial Wall for all Island veterans.

“These pavers and engraved stones have made great holiday gifts, and they are available for the upcoming holiday season,” she said. 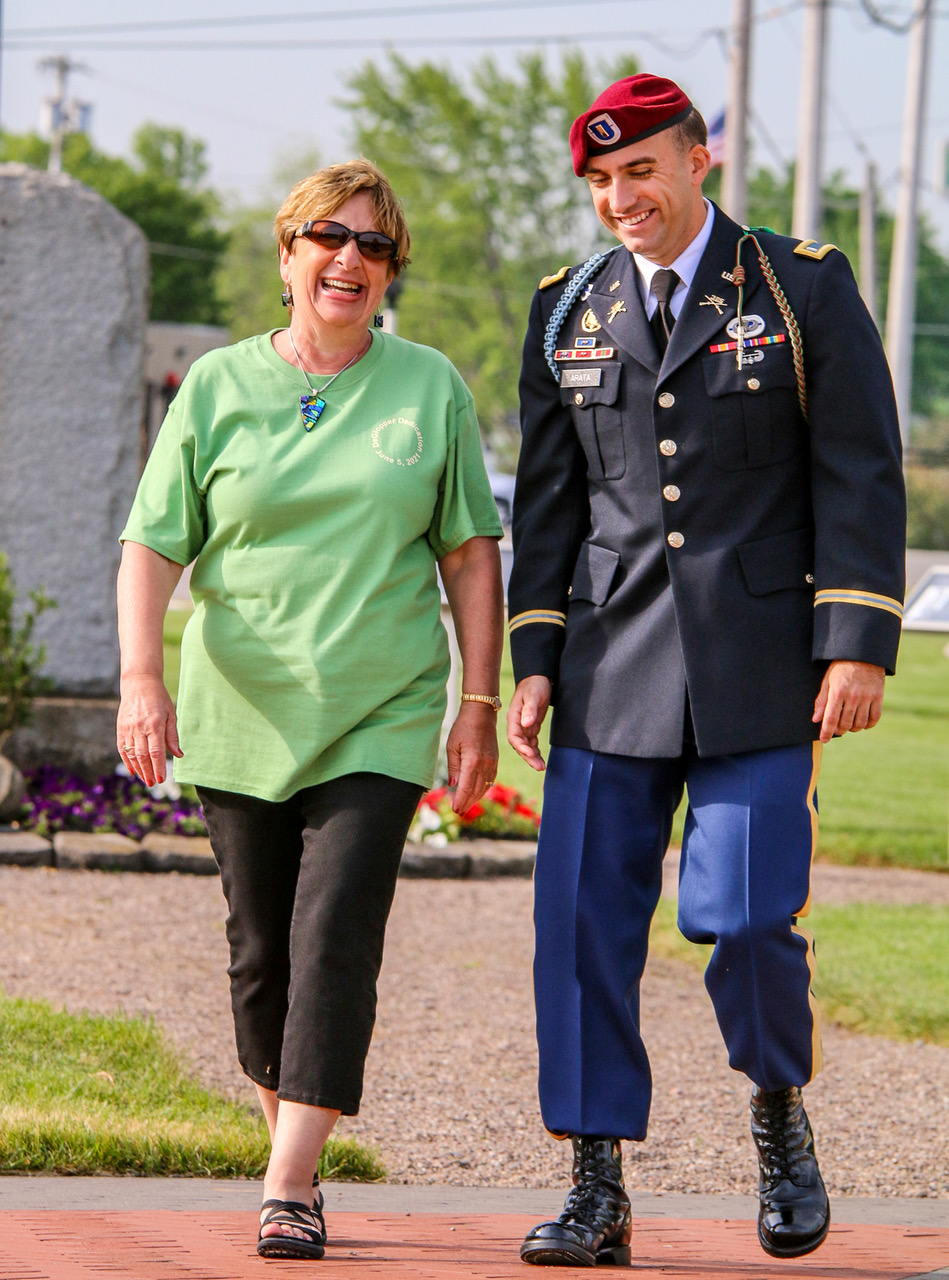