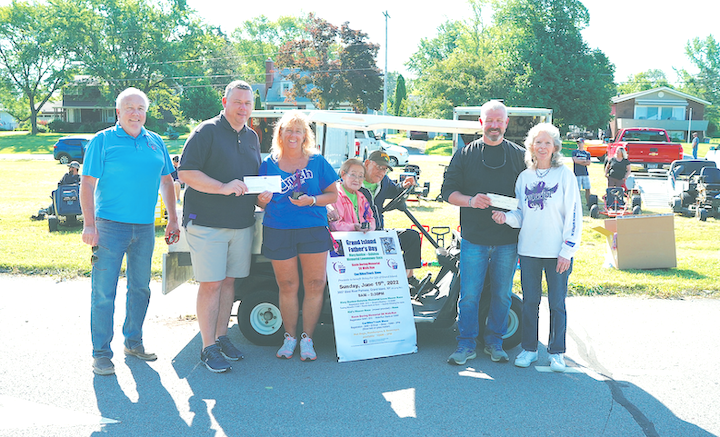 Cesar Silveira was a 15-year-old kid who loved playing soccer. He had traveled from his native Brazil to Grand Island as an exchange student, where he discovered Grand Island High School’s junior varsity soccer team.

The year was 1975. Silveira, in his seven months as an exchange student, found that he had bonded with his host family: parents Floyd and Chie Doring, and brother Kevin.

“We lived together on Bush Road, and it was a fantastic experience for me,” Silveira said.

After Silveira returned home, he and the Dorings stayed in touch with each other for a while. Communications, however, were difficult. Phone calls were very expensive. For six months, Silveira maintained a pen pal relationship with Kevin Doring. Then he lost touch with the Doring family, and there was no communication at all for 40 years, until Silveira, now a judge for the federal labor court in Brazil, and Kevin connected on Facebook.

“I talked to him (Kevin) in 2012. So I said, ‘I am going to be in Miami next year for the Miami Open Tennis tournament, and I’m going to meet you.’ And, somehow, I missed him. Then, I tried to reach him again, but I got the notice that he had passed. And I thought, how am I going to contact my parents now?” Silveira said.

So, he tried calling the town’s fire company, and he spoke to someone that he had known in high school. That person provided the Dorings’ contact information for Silveira. Since then, the Dorings have visited Brazil twice. Silveira took them on a tour of Rio de Janeiro, the hot springs, and the family farms.

Silveira came to Grand Island, as well, bringing his wife, Sonia, and his daughter to meet his American family. In addition to his daughter, Silveira has three sons. Silveira said that his daughter works with him in the labor court and that one of his sons is a member of the police SWAT team, another is in medical school, and the third is planning on becoming a lawyer.

On June 19, Silveira participated in the 5K Kevin Doring Memorial Walk/Run event to honor his brother, Kevin. He walked with Chie, while Floyd drove a golf cart behind the participants, to make sure that everyone was safe.

“I am so happy to be here, especially on this Father’s Day,” Silveira said. “I try to visit Floyd and Chi Chi as many times as I can. They are old. It was difficult in the last three years, because of the pandemic. It was terrible. I was supposed to be here three years ago, but that didn’t work out. I am here now.”

Walking with Silveira and Chie Doring were Jun and Ko, originally from Yokohama, Japan. They have lived in the Buffalo area for almost three years, and they said their favorite part of the event was walking and talking with Chie Doring.

Being at the annual Mary Dunbar-Daluisio Memorial Lawnmower Race was a source of joy for Silveira, he said. 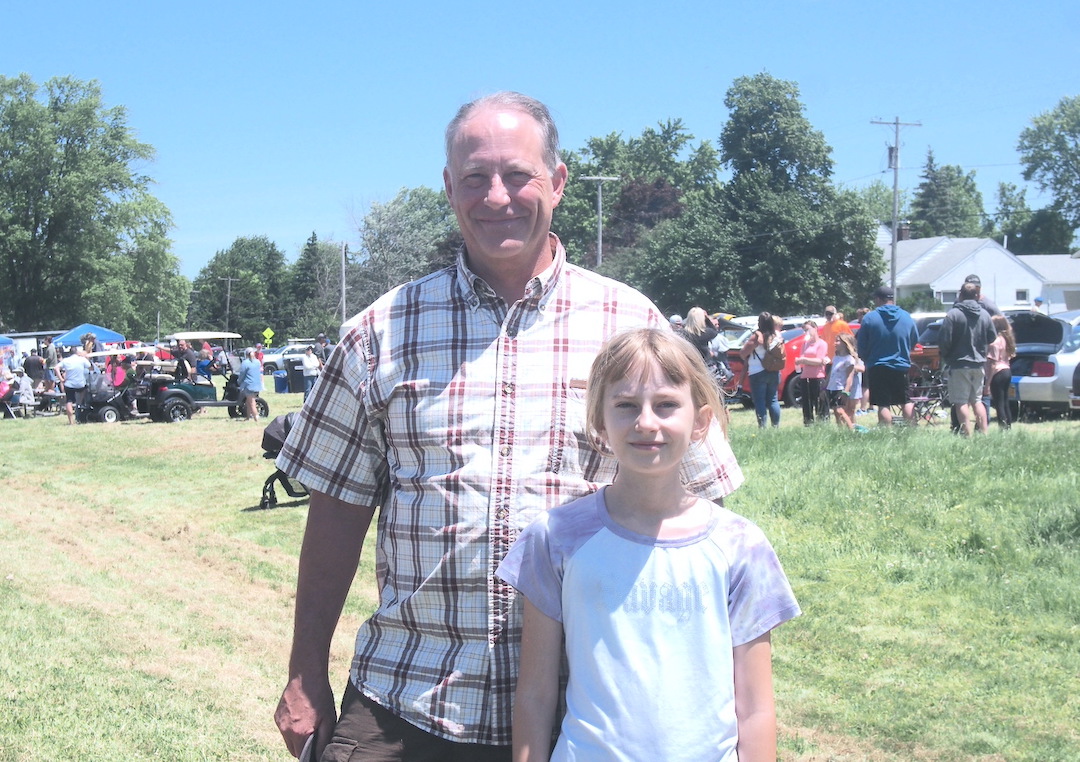 He wasn’t the only out-of-town visitor to enjoy the races. Ada Garlapow, 10, of Arizona, who was visiting her father, Christian Garlapow, said, “I like watching the tractor run and seeing the cool drone fly over.” She was referring to the drone Kevin Cobello, who co-owns K & D Action Photo & Aerial Imaging, with his wife, Dawn, was flying to take aerial images of the races.

“She wanted to race,” Christian said. “She was mad that her dad didn’t sign her up.”

“I’m driving an ’87 Wheelhorse. It’s highly modified,” Marston said. “It’s cool to ride, because it’s a lawnmower, and it’s faster than most.”

He also brought his Junior Dragster, a car that rides close to the ground and is used for drag racing, to the friendly competition.

At the end of the races, he drove the Junior Dragster to demonstrate its speed to the assembled crowd.

Luke Gworek, 15, also participated in the lawnmower races. In addition, he was trying to sell the go-cart that he and his father built when he was 8 years old.

“We saw something online. It was a cool winter project. We built it, and it turned out to be cool,” he said.

Other people came to the event to participate in in the classic car show.

Jeff Dinsmore brought a replica of a 1923 Ford T Bucket that he had started building three years ago.

“I wanted one for 40 years and finally decided to build one,” he said. “I built it from scratch in my spare time. It has a fiberglass body.”

Dinsmore described the replica as a “toy, a fast go-cart,” adding, “It was fun to build.”

He said it took about 300 hours to build it. He said he drives his “toy” four to five nights a week, depending on the weather. During the summer, he takes it to shows every weekend.

Dan Dinsmore came with his two sons, Sam and Danny Junior, and two vehicles, a 1974 Corvette and a 1971 Ford F 250, which formerly belonged to the Grand Island Fire Co.

“I was 11 years old when the truck came in brand-new,” Dinsmore said.

Now, Sam Dinsmore, 16, who attends school in Oakfield, drives the truck daily – and sometimes he drives the Corvette. He enjoys driving and said he might be interested in working in “something that involves cars.”

His brother, Danny Jr., lives in Syracuse and works for West Herr. He drives his own ’98 Corvette.

Silveira said he was so happy to be on Grand Island for the Lawnmower Race.

“I just want to say that it’s so good to be here and to see all these guys here walking for Kevin, my brother. He was a great guy,” Silveira said. “It's very nice to be here with those wonderful people, Floyd and Chie Doring. They are fantastic, and I love them so much.” 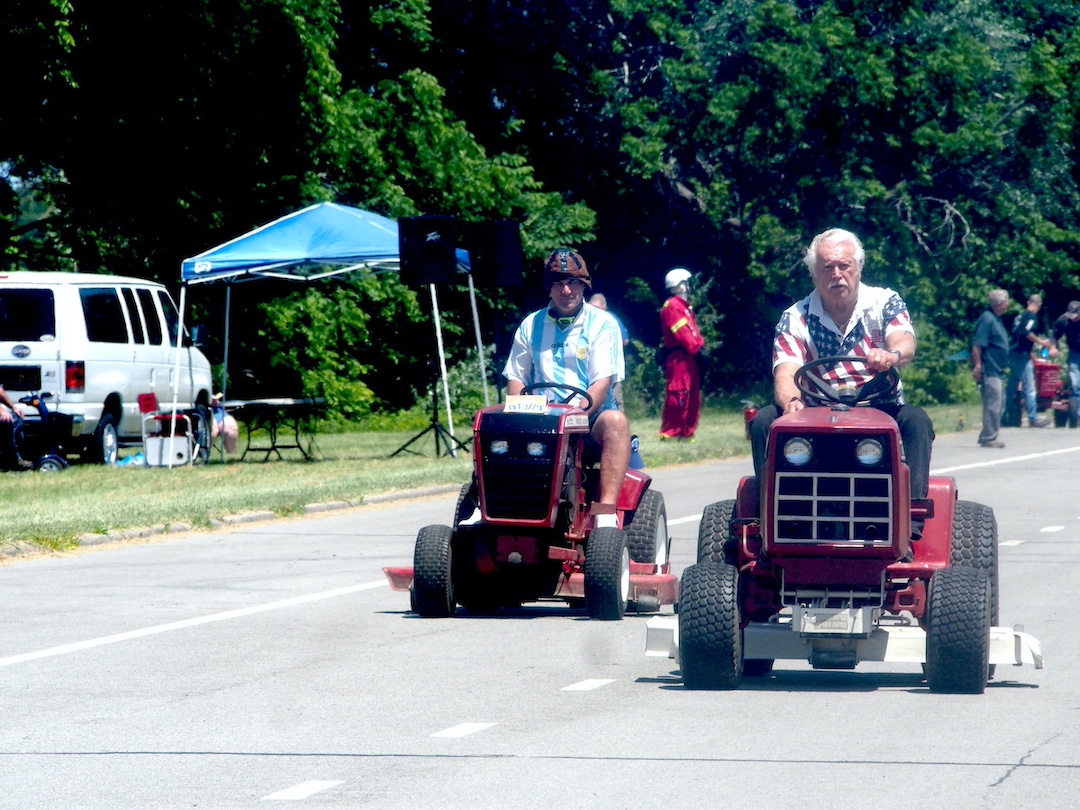