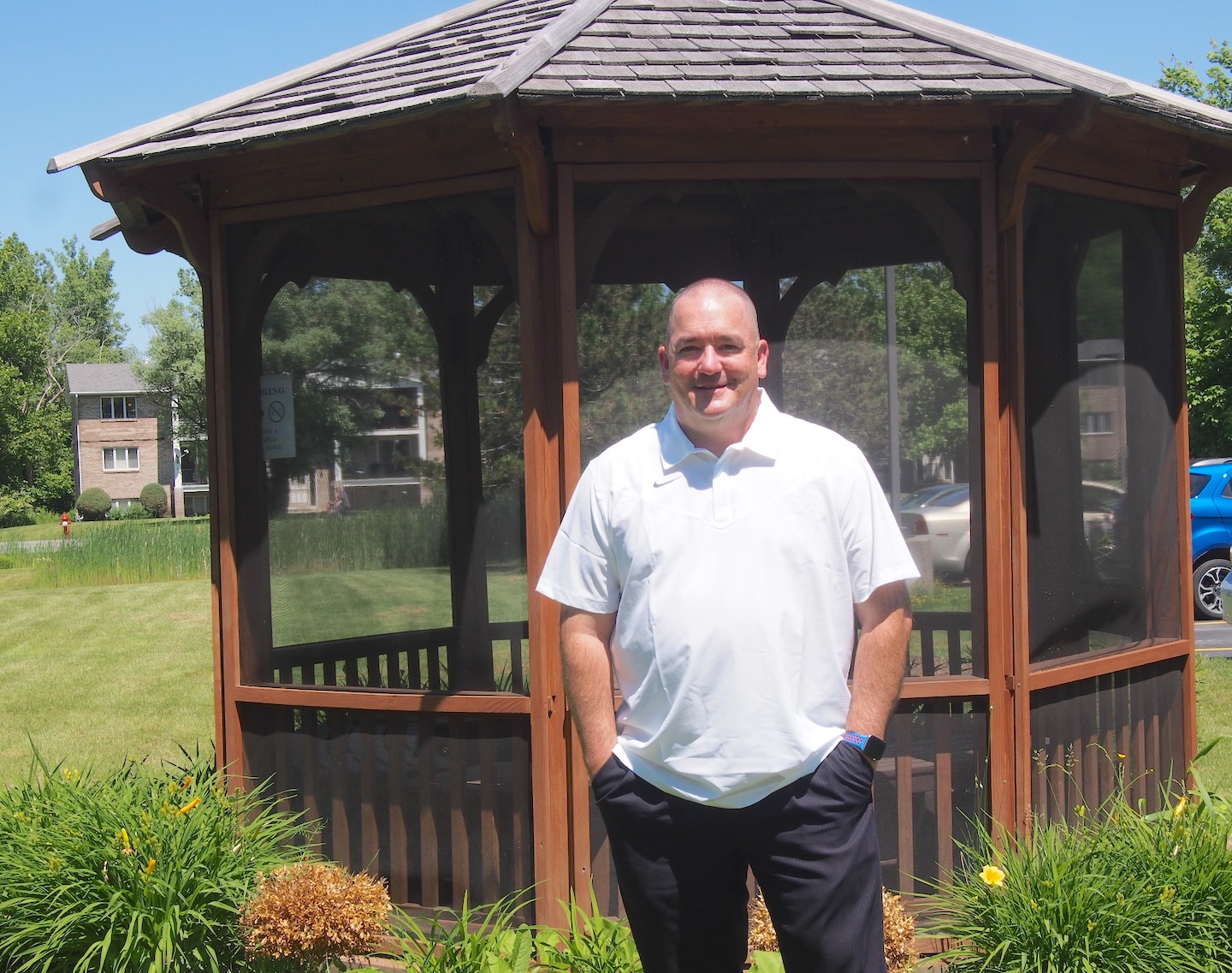 Eric Fiebelkorn reflects on his cancer journey, his survival and his life, post cancer.

On the day in 2012 when Eric Fiebelkorn, who was 38 years old at the time, went to Roswell Park Comprehensive Cancer Center for his first treatment, he prayed with his wife, Alicia, and then told her, “You know, I feel great. It’s crazy to me that I’m going in to start this treatment and surgeries. I feel like I could run a marathon.”

But Fiebelkorn, who has been named Honorary Survivor for this year’s “Taste of Relay,” was far from healthy. He was on the verge of starting a treatment program that was considered one of the most aggressive cancer treatments available. Called refractory treatment, this type of care is generally offered to people with stubborn cancers that do not respond to their first course of treatment. He was told that, if this treatment program didn’t work, the next step would be hospice care.

The route to Roswell Park and to a cancer diagnosis had been long and difficult. Fiebelkorn, who worked as vice president and general manager for Toshiba, said he had been having symptoms for several months and that they started at about the time of his birthday, in March.

“I’d been feeling pain for the better part of three or four months on my right side,” Fiebelkorn said. “I went to the emergency room a couple of times, and they did all of these scans. It presented like kidney stones. They said you probably passed it already. So that happened, and, every month, the pain seemed to get worse. It would be a spell. I’d have it for a day or two or three, it seemed. I’d take a lot of ibuprofen. It would help a little. Then it would go away. By the time I got to the emergency room, my blood pressure would get a little higher and then it would go back to normal.”

One day, however, after attending a birthday party in Orchard Park, the pain returned, and, this time, it was debilitating. “I couldn’t stand up. I was in the car, and I remember driving, praying, ‘God, just let me get home, and I will be safe. Something’s wrong.’ So I went to Immediate Care, because I was in tears. It was hard,” Fiebelkorn said. “They took a few X-rays and saw nothing. They said that they saw no reason why I shouldn’t be feeling well.”

Fiebelkorn said that, after his experience with Immediate Care, he was chatting with his neighbor, Anthony Buscaglia, a physician. Buscaglia said he wanted to see if he could help Fiebelkorn get to the cause of the pain. He arranged for Fiebelkorn to have an appointment at St. Joseph Campus, in Cheektowaga.

“He ran all of the same tests, and he gave me a bunch of pain medicine. I got enough pain medicine where I wasn’t even lucid anymore,” Fiebelkorn recalled. “He said, ‘You’re still in pain.’ ‘I am.’ ‘You must have a tremendous amount of pain,’ which I did because the pain meds he gave me, even the high level, weren’t affecting it. He said, ‘I’m going to run one more test. It’s another type of scan with contrast. It’s not standard protocol. Your insurance company will probably give you a hard time, but I won’t let you go home, not knowing what’s wrong. Obviously, something’s wrong.’ He ran the test, and another two hours went by. I remember him coming down and saying, ‘I don’t know what’s going on, but this test shows that you have something going on in your kidney area, and you have a lot of it, whatever it is.’ ”

Fiebelkorn then saw a hematologist, who found what appeared to be a tennis ball-sized mass on his right kidney and approximately 100 of something that was, at that point, unidentified, on his left kidney.

“They were thinking cysts, maybe. I don’t know,” Fiebelkorn said. “So they wanted to biopsy this. They biopsied the large area because they could get that from the outside. They sent it away. It came back as a diffuse large B-cell lymphoma, which usually presents in blood. My blood wasn’t showing markers, so they thought that maybe it was a mistake, the diagnosis. So they did a second one. It came back the same.

“I went to Buffalo Medical Group. It was my primary care. The oncologist there, who had been doing it for years, said, ‘I know the type of cancer. This presentation doesn’t make sense. Let’s see if we can get you over to Roswell to see Dr. Myron Czuczman.’ He was well known all over the world for lymphoma. They sent him a note, and he said that he was full. They told me that I wouldn’t be able to see him, but that they could probably get me in at Roswell. So then I had a friend, who reached out to him and said, ‘Take a look at these films.’ He took a look at it, and he looked at the biopsies, and he said, ‘You know what? I want to see this. It’s a strange enough presentation that I want to work on it.’ So I got lucky that it was bad and not normal. That made him interested.

“I had it (the lymphoma) on my kidneys and also on the top of my spine. The amount of it was really odd. The pain was coming from the tumor. Every time it would grow, it would push my kidney into my lungs.

“We talked about treatment, and I will never forget when we sat with him. They did more biopsies. He was the right doctor for me, but I didn’t think so at the time. He had a little bit of a middle European-Slovak type of ‘Eric!’ Very stern. He said, ‘The good news is that you have a very aggressive cancer. Very aggressive cancers often respond to treatment better than nonaggressive cancers. The downside is, we’re going to try some treatment and, if it doesn't work, you probably have six months.’

Fiebelkorn, the father of three children, Danika, Molly and Anthony, said, “We sat there, kind of shocked. Somebody has just told you that you may not be here in six months.”

After hearing exactly how serious his cancer was, Czuczman explained what was to follow. “He decided, because of my age and because I was in relatively good shape, that they were going to start a course of treatment that they called a refractory treatment. So if I had returned with this cancer coming back, they have a stronger, more hail Mary approach to the treatment. He said, ‘We’re just going to do that right out front. We think that you can withstand it.’ Normally, by the time they do a refractory treatment, they’ve worn someone down so bad that they do it again. What often kills you isn’t the cancer; it’s the treatment.”

The treatment was aggressive and arduous, Fiebelkorn said. “That started the course where I would get treatment on a three-week cycle. I would go in and get eight hours of chemo and a Rituximab therapy. Actually, it started with a spinal tap. They gave me intravenous chemo. They were worried about the cancer getting into the brain. So they gave me chemo into my central nervous system and into my brain stem and hung me upside down for five or six hours. Then I would go and have a hookup for eight hours. Then I had to wear a bag with a computer on it. I had chemo for seven days straight.”

Fiebelkorn described the week of treatment as “no fun,” the week after treatment as “terrible,” and added, “The third week was really the time they gave your body to recover before they hit you with the next one. Those courses were progressively stronger.”

After the first week of treatment was finished, Fiebelkorn said he didn’t feel too bad, so he decided to celebrate with family and friends by grilling steaks. After he understood that he was unable to digest the steak, he began to realize what cancer treatments were doing to his body.

“Your body’s trying to fight it (the chemotherapy drugs). Push it out. From then on, I didn’t have any steaks for a long time,” he said. “Everything degrades. What they try to do with chemo is to kill everything but you. It really wears everything in your body down. It can destroy everything: your appetite, everything. It really wore me down to the point where, when I had the last one, I couldn’t lift my legs. All of my strength was sucked out of me.

“But the good news is that they do a PET scan halfway through. In the PET, it showed a big decrease in activity, which was a good thing. They told me that, if they didn’t see a decrease there, they would have said, ‘Maybe we’ll just stop and call in hospice.’ That point was a little scary. That would mean that there was nothing they could do.

“In late summer/early fall, I had a final PET scan, and I was hoping to hear, ‘You’re good to go.’ The PET scan lights up when it sees cancer. They were seeing something in my lower abdomen. They weren’t sure if it was the residual. My body trying to push the chemo out or if it was still cancer. So I had to wait another month or two for another PET scan. That last one came back and showed nothing. That’s what I want to see. Nothing. That was great. It was in November of 2012.”

Next week: Fiebelkorn’s recovery and how he and his outlook on life changed after he recovered from cancer.