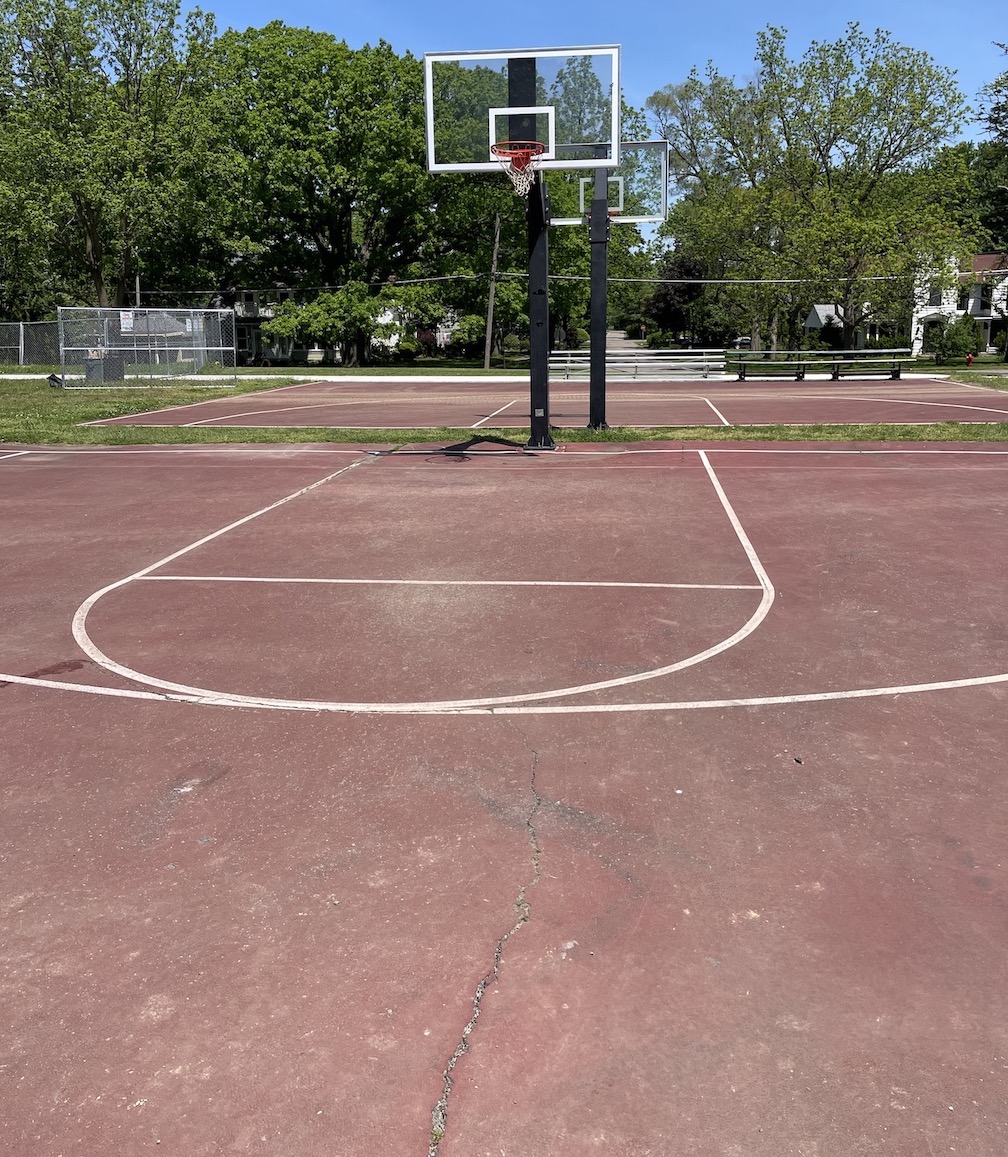 Village of Lewiston Board votes to add fence to playground, resurface basketball court

Trustees in the Village of Lewiston on Monday voted to fence-in the new inclusive playground and resurface the outdoor basketball courts at Marilyn Toohey Park. They approved these improvements contingent on receipt of funds from the sale of the “Big Yellow House” at 475 Ridge St.

“The sale of that house … I think this is a good use of the proceeds to go back into the community and into recreation,” Mayor Anne Welch said.

“I think it’s well worth the project, to get it done,” Deputy Mayor Vic Eydt said. “We’ve got such a beautiful (playground) out there, and the court needs it.”

Treasurer Stephanie Longwell informed the board that, as of May 17, the municipality had $47,633.90 left in the playground account. With the rides, equipment and special rubber surface in place, and the splash pad installed, remaining invoices total $42,050.

The playground, as originally presented, is actually under budget. Welch said that is largely thanks to donations of time and manpower from project developer Mark Cerrone Inc.

In evaluating the project, however, trustees lamented not adding an enclosure for additional safety.

“How did we miss the fence?” Trustee Dan Gibson said. “Every rendition I saw had a fence around it.”

Welch explained, “That was an add-on. It was not originally (included). That’s when we said ‘Well, we really should have a fence.’ ”

Moreover, Welch said the adjacent basketball courts need to be repaved, so as to make that area more user-friendly.

“If anybody’s looked at the basketball courts, you can see how badly it has deteriorated,” she said.

An estimate from Fox Fence to add a four-foot, black chain-link fence wrapping around the playground came in at $12,970.53. Mark Cerrone provided an estimate for the basketball court resurfacing ($75,375) and would install the asphalt. Here again, it’s expected the village would only be charged for parts, and not for labor.

Village counsel Joseph Leone said the sale of the “Big Yellow House” is nearing closure and should be completed by the end of next week. The municipality will receive more than $270,000 for the house and land formerly used by the Lewiston Council on the Arts.

Trustee Claudia Marasco said, “We have to have a safety net under us.” She proposed the contingency clause.

Recreation Director Brendan McDermott quoted Mark Cerrone in saying the basketball court paving and reconstruction would take about a month, once work gets underway. 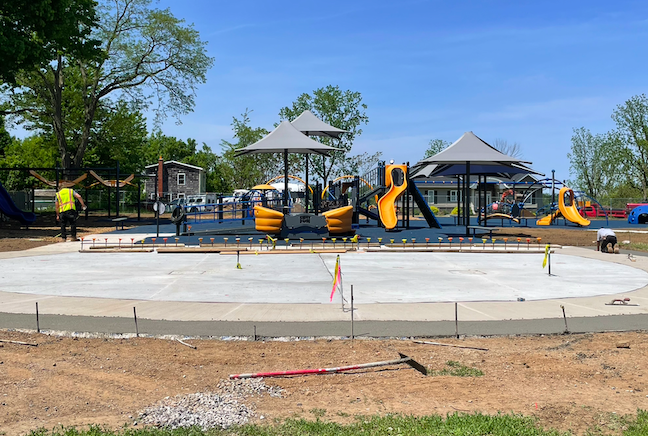 Construction continues at the inclusive playground at Marilyn Toohey Park, behind the Red Brick Municipal Building.

In correspondence sent Friday to the Village Board, McDermott wrote, in part, “The courts have not been paved since 2001 and have last been resurfaced in 2011. The courts have reached the end of their lifecycle. In addition, the courts have sustained additional damage during the community build of the playground creating further liability to the village. The proposal from Mark Cerrone Inc. will ensure that park patrons and recreation program participants have a court that is safe for use.

“Having access to the all-inclusive playground along with resurfaced basketball courts will give our recreation leaders a venue in which to provide outstanding opportunities for all our participants to take advantage of. Parks and playgrounds bring people together, this park has the power to enhance opportunities for families across the region. The basketball courts are one of the most utilized Village of Lewiston parks and recreation assets. The Village Recreation Program is scheduled to host outdoor basketball clinics on the courts throughout the summer for youth ages 8-14 years of age. We currently have over 80 boys and girls registered for the program. In addition, we plan to host many Family Fun Night activities throughout the summer in the park, which already have over 100 registered families. The courts are also used by many individuals for ‘pick-up’ basketball as well as exercise classes. These courts are used consistently throughout the day and year.

“Toohey Park is the ‘hub of play’ within the Village of Lewiston. The proposed work on the basketball courts will provide our community decades of safe and fun playing opportunities.”

Public playground donations from residents and service groups have exceeded $127,000. Three years ago, the Town of Lewiston helped secure a $200,000 grant from the Niagara River Greenway Commission. The village also was awarded a $250,000 grant from the Dormitory Authority of the State of New York. Longwell said the municipality has provided $78,778.90.

Trustees pondered adding a second fence – this one 10-feet high – to encircle the basketball courts. They reconsidered after seeing an additional cost estimate of $42,466.52.

Following the meeting, Welch said the playground would definitely open this summer, but she doesn’t have a timeline for the playground’s public debut – or know if it will be before or after the fence is installed.