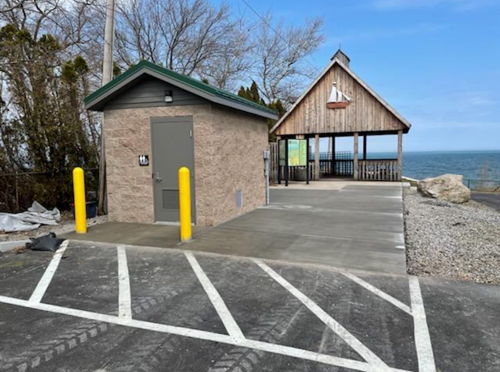 Last week, officials with Niagara County Fire Wire put out the call for assistance from its volunteer fire company membership from throughout the county. “All available personnel requested to Olcott Beach to load sandbags,” its Facebook post stated.

So what is going on? According to the post, the call to sandbag at Olcott was seen as a preventative measure to ward off potential high lake levels from snowmelt in the Great Lakes basin and high waters in feeder creeks. Currently, lake level measurements taken at Oswego on the eastern end are showing at 2 feet higher than last year, according to recent data from noaa.gov.

While flooding preparations have returned on Niagara County’s northern shore, it has not yet reached an action point on the lake for the drastic responses as seen in the years from 2017-19. That could change, dependent on precipitation patterns this spring/summer, and impact not only on the lake basin areas, but also further upstream in the St. Lawrence.

Currently, the International Joint Commission has begun work on phase two of its expedited review of Lake Ontario Plan 2014. The U.S.-Canada group is charged with oversight of waterways on both sides of the border, including the Great Lakes. IJC said Plan 2014 “is a set of rules that regulate the rate of outflow from Lake Ontario into the St. Lawrence River through a dam on the upper St. Lawrence, with the goal of moderating extreme water levels while allowing more natural variation in those levels.”

Plan 2014 drew heavy criticism from interests on both sides of the border, particularly after the Lake Ontario floods of 2017-19, and spurred IJC to act. Its recently completed phase one study focused on IJC and its entities to support oversight of Plan 2014. Phase two is forecast to include “a thorough analysis of Plan 2104, especially the plan’s response to extreme high and low water levels and climate change impacts.”

“Multiple predictive models that feed into the overall shared vision model (in phase two) will incorporate a variety of water supply scenarios, including some with higher or lower water levels than those seen in the past,” IJC stated. “Some scenarios will depict trends that play out over spans of many years so that potential long-term impacts can be considered.”

From that point, IJC computer models would compare the impact of Plan 2014 on lake levels and river flows to impacts proposed under phase two, such as alterations of the high- or low-water limits or modifications to “trigger levels” when the board is authorized to deviate from the plan.

“The models will simulate how these comparisons might play out under a host of different wet or dry water supply scenarios that could occur with the changing climate,” IJC stated.

IJC’s International Lake Ontario-St. Lawrence River Board will then decide on how to best measure the impacts and evaluate any proposed changes to the plan. The board would then recommend any changes to the commission for future action on Plan 2014.

In related news, state officials announced completion this week of a $1.6 million Townline Pier project in the Village of Wilson. The project was awarded under the state’s $300 million Resiliency and Economic Development Initiative (REDI) that is intended to address past flooding issues in lakeshore communities.

According to state officials, the completed Wilson project includes raising the structure 3 feet to an elevation of 252 feet to allow the pier to remain easily accessible during high water events; the installation of new stairs allowing access to the pier from the shoreline; mitigating further erosion through the addition of riprap along the shoreline; and construction of a public restroom and parking lot improvements.

“Communities along the Lake Ontario and St. Lawrence River shorelines have faced serious challenges in recent years after repeated high water events,” said Basil Seggos, New York State Department of Environmental Conservation commissioner and REDI commission co-chair, who attended the pier ribbon-cutting with a number of state and local officials. “I applaud Gov. Hochul for investing in long-term solutions that will ensure vulnerable shoreline communities have reliable access to the pier during high water, and the shoreline is protected from future flooding.”

Niagara County Legislature Chairwoman Becky Wydysh said, “The REDI program has allowed communities along Lake Ontario to repair the infrastructure damage we incurred from severe flooding and to build with an eye toward the future. The Townline Pier in the Village of Wilson had been 2 feet underwater at one point. Now, not only has it been reconstructed to better withstand future weather events, but it will improve pedestrian access, be safer for boaters, and hopefully provide new economic development opportunities.”

Village of Wilson Mayor Arthur Lawson commented, “The Village of Wilson faced an unprecedented challenge of rising lake levels. The rising lake levels affected our critical infrastructure and created safety issues for recreational boaters. When the Village of Wilson asked for help, the state delivered. By awarding the village $1.6 million to rebuild our Townline Pier, not only did Gov. Hochul save a piece of vital infrastructure, she ensured the safety of recreational boaters, and preserved a piece of our village culture where so many if our residents grew up with such fond memories.”

Since creation of the state’s REDI program in the spring of 2019, a total of 134 REDI-funded local and regional projects are underway, including 74 projects in the design phase, 24 projects in the construction phase, and 36 projects completed.