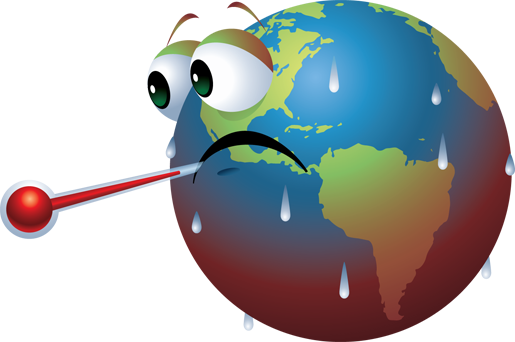 For students and young people, global warming is one of the most pressing issues.

For many years now, science has been warning mankind of potential dangers that would come with climate change. Things have begun to change for the better, with people overall much more aware and engaged in preventing this. Despite these efforts however, each day the question of Earth’s life expectancy becomes harder and harder to answer. With some scientists today saying the world may have as little as a few good years left to reverse the damage, it is no wonder the younger generations feel it necessary to step up.

But are young people ready to shoulder this responsibility?

The Issue at Hand

While Earth has always slowly warmed, according to NASA, over the past 50 years, the Earth's rate of temperature increase has doubled. This means that what began as a few summers with record-breaking temperatures, could potentially grow into an unlivable climate and the mass extinction of all life on Earth. The scientific community has agreed that another 50 years of this exponential growth will at least guarantee more natural disasters and food shortages.

The increases in temperature around the world are caused by greenhouse gasses that rise into the atmosphere. Part of this gas comes from volcanic eruptions and other natural, carbon releasing phenomena. The rest is from human emissions, due to the reliance on fossil fuels, which seems to be the greatest contributor. In fact, NASA scientists are able to rule out any other possibility, and point a finger directly at human pollution for this issue.

What are the risks of global warming? Well, outside of the planet's heat reaching an unlivable temperature, there are several other dangers that come with climate change. As permafrost is thawed out, it releases a dangerous amount of methane gas into the atmosphere, as well as potentially releasing certain deadly diseases.

Not only this, but recently, climate change has caused disasters such as hurricanes flooding, blizzards, typhoons and cyclones to occur much more often globally. In 2021, these climate-related disasters caused nearly $170 million in damages, with the most destructive being hurricane Ida in the United States.

Protesting at all Costs

The facts one hears about climate change, while troubling, are becoming common knowledge. But as it was, it seemed there was enough leeway around the issue before the situation was truly dire. Recently however, an under-reported story contained well cited information that seemed to say quite the opposite.

Peter Kalmus works at NASA's Jet Propulsion Laboratory, studying biological systems and climate change. Despite being in good standings at his job, he could see the direction Earth was headed and decided enough was enough. Kalmus boldly chained himself to the entrance of a Chase Bank in Berlin on April 6, with three others and a small group of protesters.

Kalmus passionately spoke about how dire the situation truly was, saying there are no more than a few years left before an impending global disaster. Knowing full well he would most likely lose his job, be publicly shunned and taken into custody, Kalmus made a sacrifice for the greater good of the Earth and shared his message.

"I'm willing to take a risk for this gorgeous planet,” said Kalmus, fighting back tears. “For my sons,"

As Doctor Kalmus says, the idea that this is a struggle for a future generation is ridiculous, and there are just a few years to make serious changes. In the past, older generations have scoffed at the thought of such things happening in their lifetime, but the possibility of disaster grows larger and larger each day. Fortunately, as new generations of children grow up with the internet and modern-day science, they are exposed to these issues early on. Thanks to the online world, students and anyone willing to learn can easily find the resources to educate themselves on this topic. This newly accessible knowledge has caused environmental justice groups and movements online to form at an incredible rate, and the amount of students in school for environmental studies continues to increase.

Despite it no longer only being a question of the youth’s future, young people are taking a great amount of responsibility for protecting the environment. The increased empathy for the planet is most noticeable in young people, as many students are devoting their lives to making a change.

To get a better understanding of young people's outlooks and opinions on climate change, several interviews were conducted at Niagara University. This gave an opportunity for students to anonymously express their true feelings on the state of Earth’s future, and what needs to be done to help it.

Logan Grow, a freshman at Niagara University, said, “This is the time to set things right, but our world leaders are unable to come together to tackle the one problem that will doom us all. It’s truly terrifying to see it all happen right before our eyes, but it will be even more terrifying for our grandchildren, who are born into a decaying world.”

Much like Logan, much of the younger generation is far from blind to this issue, but simply do not have the platform for change that others do. Many feel as Logan does, and that there is nothing more frustrating than watching this opportunity to save the world be continually wasted.

Alexis Schlaak, an incoming freshman coming to the school in fall of 2022, said, “I was completely unaware of this protest, and many other recent events involving the climate crisis. This statement is not only true in my personal experience, but for too many others. Ignorance is the biggest weapon in our generation, especially with the gravity of this situation.

“The recent studies that were released show that we truly are running out of time to save this planet. While the individual may not have created the problem, most sustained the decline of our climate. Therefore, I believe it is everyone’s responsibility to contribute and attempt to solve this critical climate situation before it’s too late.”

Despite some students being knowledgeable on the topic, it seems many were still unaware of what had taken place on April 6 and how dire Kalmus thought the situation was.

Out of 20 students, only 11 had heard of the story, nine of whom were able to identify Kalmus’s message.

“I have not heard about that, but I believe that climate change is a huge problem,” said Tyler Maloney, who, despite being unaware of recent developments, still had a strong opinion on how difficult handling climate change will really be. “We aren’t currently equipped to face this issue due to the amount of reliance our society currently has on using fossil fuels. But we have made some progress towards lessening usage of fossil fuels with electric and hybrid cars.”

There is no denying the youth in America are an empathic and motivated group. While some aspects of climate change are still up for debate, most agree that something needs to be done. Kalmus’s story however, seems to illustrate why efforts have been so lacking, as audiences seem to avoid news that makes them uncomfortable in this way. ... As the phrase goes, ignorance is bliss. However, in the face of the so-called end of our world as we know it, can humanity listen before it is too late?