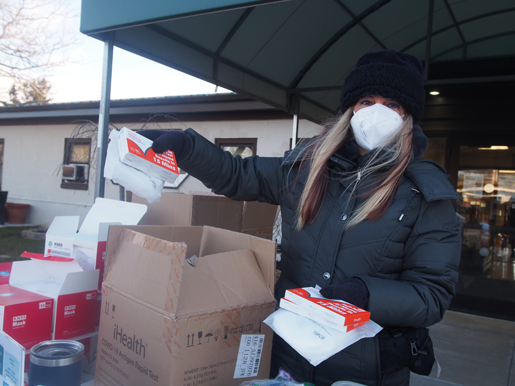 It was a frosty and windy Monday morning with temperatures hovering around 10 degrees. Along Whitehaven Road and into the parking lot of the Nike Base, cars were lined up. Over the weekend, the drivers of those cars found out that the Golden Age Center was to be a distribution point for sets of KN95 masks and COVID-19 at-home antigen test kits. Each household was entitled to receive two home testing kits, containing two tests each.

The distribution at the Grand Island Golden Age Center on Jan. 10 was a pop-up event that was arranged during the weekend. According to Jennifer Menter, recreation supervisor of the Golden Age Center, “It really was a whirlwind of an event, because we did just receive word that we were able to have it this past Friday night. So, it came together very quickly. It was a great success. It was a nice event to have, to help out our community at such a crazy time.”

Menter said the test kits were distributed in about two hours. After there were no more test kits available, she and other staff members of the Grand Island Golden Age Center, as well as the Grand Island Recreation Department, continued to pass out masks. She explained the Golden Age Center had been “passing out masks since day one, since this pandemic started back in March 2020.” 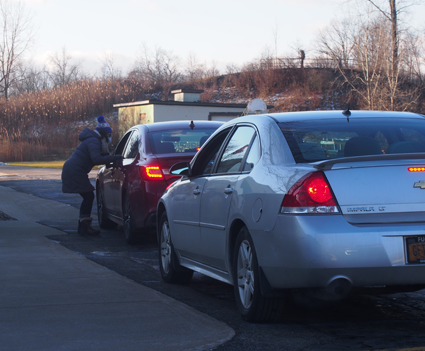 Jen Menter hands masks and two sets of test kits to a driver, who had been waiting in line at the Jan. 10 pop-up event.

As soon as Menter found out on Jan. 7 that the distribution was going to happen, she began to work on an advertising plan.

She described her next steps to making the pop-up event a reality.

“When I started seeing on the news and on social media about how other towns were responding to these pop-up COVID-19 home test distributions, I thought, ‘Oh my gosh, I’m going to have to tweak it this way and rethink it,’ ” Menter said. “Just seeing how people are coming out, and there were lines going down the street and stuff, that’s when I thought that I’m going to have to make sure to have the Grand Island Police Department on the scene to make sure to help with traffic control, along with myself and so forth. I’m really grateful to have the help of Laura from recreation and the help of the Recreation Department in helping me put up the cones and barricades and things of that nature, because that helped in having a nice, smooth drive-thru, so that we could still not only have the Nike Base open for programs and for our employees to come in and out of safely, or, in the case of an emergency, to have emergency personnel come in and out safely, but, at the same time, too, for our recreational opportunities to still be able to happen in a safe manner and for business to happen in a safe manner; but at the same time, to have an emergency event such as this in the middle of a pandemic to happen in a safe manner, too. I’m glad that the word got out really easily and very smoothly because, for this to be executed in two days and for these tests to be gone in two hours, is just crazy.”

Menter noted the Golden Age Center continues to distribute masks, which include KN95 masks, surgical masks and cloth masks. People can pick up masks when the center is open, from 8:30 a.m. to 3:45 p.m. weekdays.

According to Erie County Executive Mark Poloncarz in an Erie County Department of Health press release, Erie County is experiencing an “extraordinary surge in COVID-19 cases.”

“This is not a one-and-done event,” he said. “My administration and the Health Department are committed to providing additional testing supplies and PPE to our residents to support public health and safety, especially for residents in our county who are most vulnerable to COVID-19 infection.”