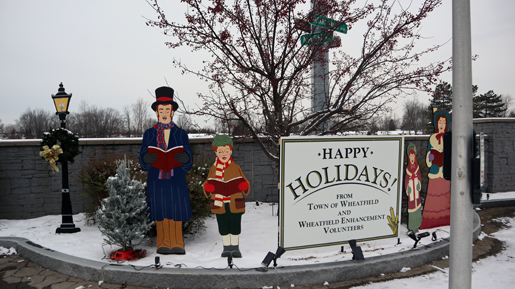 The corner of Nash Road and Niagara Falls Boulevard in the Town of Wheatfield has been decorated to show the joys of the season. (Photo by Michael DePietro)

Monday’s Wheatfield Town Board meeting began with updates regarding a burst water line that occurred last week on the corner of Sy Road and Niagara Falls Boulevard.

The board authorized its Water/Sewer Department, town supervisor and town attorney to proceed with emergency rehabilitation/repairs to the intersection’s 18-inch water main following a water line failure, which resulted in water loss and reduced water pressure to some residents.

“We had a little excitement last week,” Water/Sewer Superintendent Richard Donner explained. “A surprise blowout on the Boulevard ended up being a bigger job than what my department could handle. So we needed some help from Mark Cerrone Contracting and a little help from some area water departments to get the proper parts and stuff together. … I gotta commend the guys. They did a good job on the work we did.”

Donner said, overall, the outage lasted less than 24 hours. When asked about the cause, he said, according to records, the affected pipe had been installed by the manufacturer in 1958. The problem stemmed from a repair that was made over 30 years ago.

“There was a repair made on that line, and it wasn't repaired quite the way it should have been. And it actually rusted out part of the pipe,” he explained. “Now it was fixed properly. We replaced the whole length of pipe.”

Donner said Cerrone will take care of the blacktop on the area’s road edge that requires refurbishing.

He noted, “We also don't have prices yet from them. We're just getting everything together in order to replace all the parts that we borrowed and have enough stuff on hand in case this happens again.”

Officials explained that, because the repair project was a public emergency, the town did not have to comply with competitive bidding requirements pursuant to General Municipal Law. Councilman Larry Helwig explained recently received federal coronavirus funds could be used to cover some of the costs for the repair.

The council offered thanks and praise to the Wheatfield Enhancement Volunteers for their work in decorating the corner of Nash Road and Niagara Falls Boulevard for the holiday season as part of the “Boulevard Beautification” event. Councilman Curt Doktor, a member of the volunteer group, implored residents looking for some holiday cheer to stop by for a look.

“If you get a chance, take a peek – because it's all lit up at night,” he said. “We've got our Norman Rockwell-esque characters up that were up last year, and a couple of additional embellishments that I think were added this year. So, I think it looks really nice.”

Doktor also said the group was encouraging all members of the town, especially businesses and residents along the boulevard, to participate in the event by decorating to the nines through Jan. 2.

Supervisor Don MacSwan applauded the volunteers for their hard work and dedication in braving the cold to help make the corner look beautiful.

“You’re a great group, and I truly appreciate what you do for the town. Some people don’t notice, but I do,” he said.

Doktor replied, “It's such a such a dedicated group of volunteers that are so willing to help out. So, that's what makes it easy.”

The board scheduled a pair of upcoming public hearings, with the first pertaining to battery energy storage systems, primarily in their usage with utility-grade solar energy facilities.

In a motion, the town declared itself SEQR lead agency and announced a coordinated review of a proposed revision to the Town Code, Chapter 200 – Zoning. The board authorized its engineering firm, Wendel, to provide assistance in completing the coordinated review process.

The next regular Town Board meeting is scheduled for 7 p.m. Dec. 20.