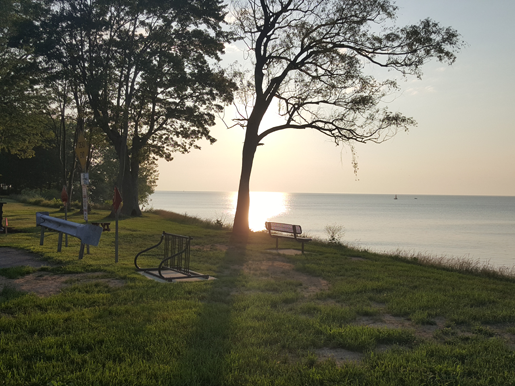 Lakeside improvements by the town include new benches and bike racks in the Fort Niagara Beach neighborhood, along with erosion control work along the shoreline. (Photo by Terry Duffy)

Waterfront improvements are underway and continue in the Town of Porter.

Earlier this year, the town completed a $348,000 shoreline rehabilitation project in its Fort Niagara Beach neighborhood. Work included stone reinforcement work on the lakeshore areas that had fallen victim to severe erosion, and the installation of benches and bike racks along the town-owned shoreline. The project came about, partly from funding from the state’s Resiliency and Economic Development Initiative intended to assist lake communities that had fallen victim to the earlier Lake Ontario flooding.

“We wanted to provide a place there for residents and visitors,” said Porter Supervisor John “Duffy” Johnston.

He said the town’s waterfront attention is now moving east, with a number of projects in store now and in the future at the nearby Porter on the Lake Park off Dietz Road.

“I wrote this grant for the Town of Porter; it’s going to be an exercise trail,” he said. “We got it from the LWRP grant (also known as the Local Waterfront Revitalization Program).”

Funded in part by the New York State Department of State and the Environmental Protection Fund, the new projects at the town park are intended to improve on the lake’s water quality and protect shoreline erosion, educate residents and visitors on environmental issues, and provide for better public access at parks and trails in the town.

“There is going to be a bike path coming all the way down Dietz Road,” Duffy said, noting that, in the future, this will also serve as a final leg for the statewide Greenway Trails project for the River Region.

Looking over plans for the park, he continued, “When you come in, there’s a natural trail (on the park’s south end). So, now it’s going to go to the east.”

Plans at POTL call for construction of a small bridge going over a nearby creek on the park’s eastern end, along with playground equipment for the kids and an exercise facility intended for all ages. Anticipated to cost roughly $140,000, funding will come from an LWRP grant, Johnston said.

“It will be an 80/20 match. There will pull-up bars, push-up bars, different exercise equipment,” he noted. 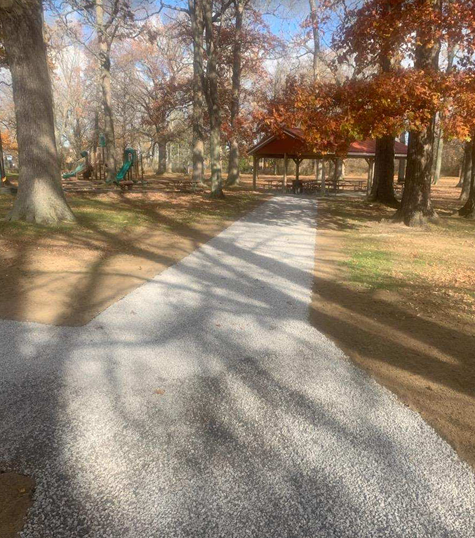 New park trails at Porter on the Lake, and the new bridge completed by Youngstown Scout Robert Gilbert as part of his Eagle Scout project. (Submitted photos) 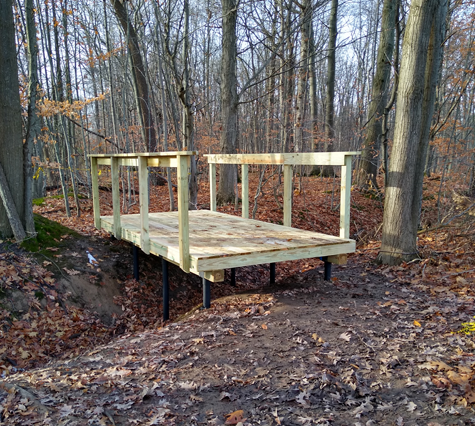 And that’s just part of the improvements in planning for POTL, a former lakeside recreation property owned by the Occidental Chemical Corp., which the town acquired in the early 2000s.

Still another park feature will be an access point for kayaks at the end of Dietz Road with a new parking lot for 12 vehicles nearby. On the sandy beach area, plans call for four sets of waterfront benches placed lakeside. Balancing the project are three trail benches each for wooded sections on the park’s eastern lakeside area and in the southwest side near Dietz Road, plus the bridge, signage and the aforementioned exercise equipment.

Returning to the bridge project, Johnston said that Youngstown Boy Scout Robert Gilbert has been working with his Scout members to build it as part of his Eagle Scout project over past months.

“He supervised the whole thing and was assisted by the younger Scouts,” Johnston said. “(Gilbert’s) dad helped him with the pilings, it’s some project.”

And capping off this will be fitness exercise court/gym that’s eyed for the park in the future. A project of the National Fitness Campaign, the fitness court offers a variety of exercise equipment at no charge to the general public. Described as “the world’s best outdoor gym,” it’s the type of facility typically found in university settings and exercise centers in bigger cities.

According to the National Fitness Campaign, “The fitness court accommodates beginners and experts at every station. Users can leverage their bodyweight at different angles and levels of resistance to improve their performance over time.”

At this writing, Johnson said the town is pursuing funding assistance for the fitness court via Greg Stevens, executive director of the Greenway Commission. The project is eyed as another component of the developing state trails system from Lewiston up to Youngstown and out to Porter on the Lake. It’s expected to cost in the range of $348,000.

“There’s nothing like it around here. The closest one is in Rochester,” Johnston said.

Johnston said he met with Stevens this week, and Stevens is developing a master plan to integrate the trails system into POTL along with the fitness center. It’s eyed as the finishing piece to the town’s park’s improvements that are expected to be complete in 2022.

“He’s all on this,” Johnston said. “It’ll be part of the bike trail that will end in the park.” 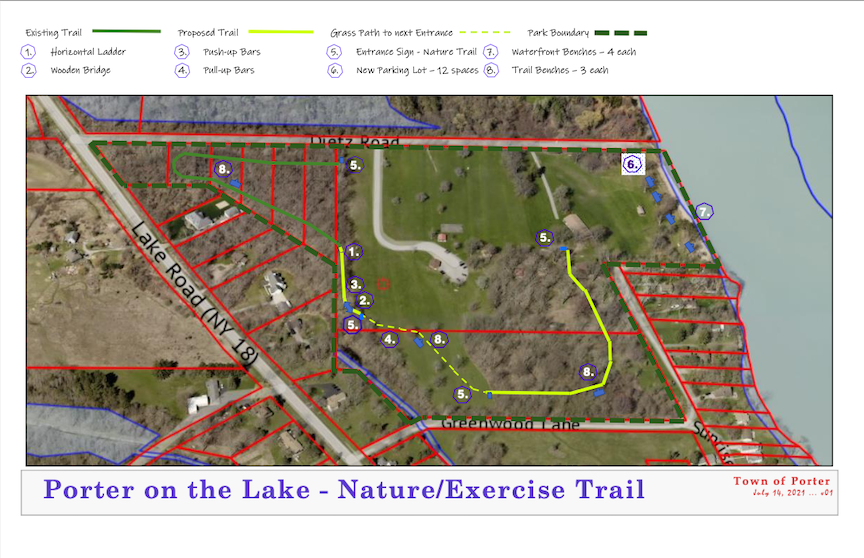 An overview of the improvements at Porter on the Lake includes trails, exercise equipment, new benches, kayak access, a new parking lot and signage. (Submitted photo)