During the 2021 spring semester, senior Maren Geiger began her endeavors of bringing awareness to sexual health and wellness on Niagara University’s campus. After gathering information and having many conversations, Geiger’s Sexual Wellness Initiative (SWI) was formed. It is a coalition (not affiliated with Niagara University) of almost 40 students who are dedicated to educating students about sexual wellness. 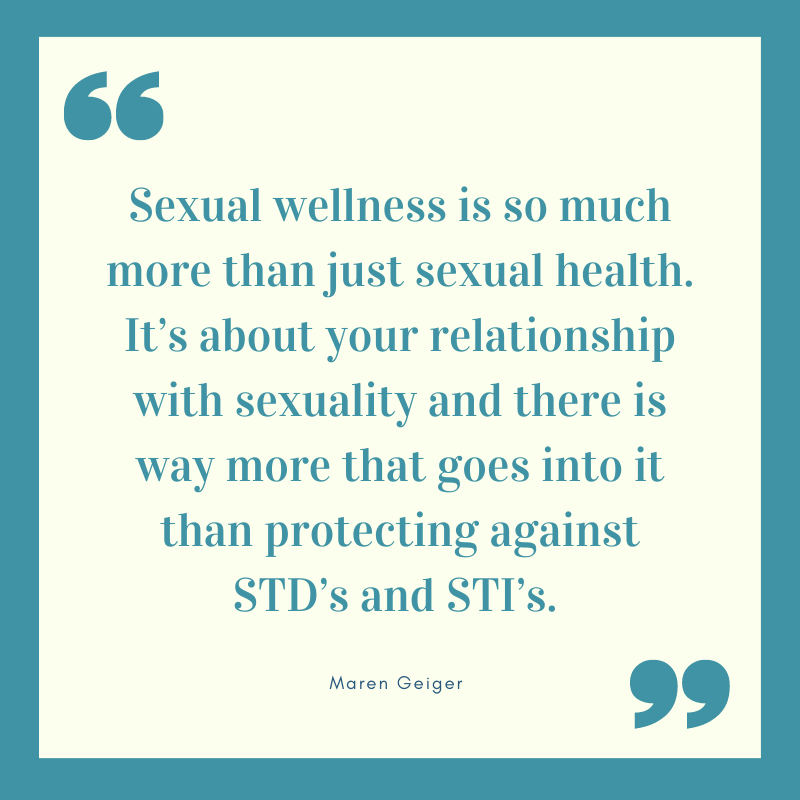 On Oct. 12, the first post on its Instagram (created and run by Geiger) introduced the coalition as a group of students “dedicated to inclusively educating the student body on sexual wellness, improving student access to safe sex materials and contraceptives, and promoting sex positivity.” From this first post, the SWI quickly gained followers and began to share its ideas with other groups of students at NU.

Unfortunately, the SWI did and will continue to run into obstacles concerning the university’s Catholic values, according to religious leaders and administration on campus. Especially when it comes to distributing safe-sex materials and contraceptives, NU will not allow it.

“According to Catholic teaching, artificial contraception interferes with God’s intention in creating the human capacity for sexual intercourse: unity and reproduction. Accordingly, Niagara University does not permit the distribution of condoms or other artificial methods/products designed for the purpose of preventing unplanned pregnancy,” said Christopher Sheffield, vice president of student affairs, in an email.

Sheffield went on to explain the purpose of the contraceptive matters, and that there are some reasons why it would be “permissible.” For example, if the contraceptive method does not suppress fertility or implantation, or if the provider believes that a particular pharmacological treatment is the best for a patient who has a different condition that should be the first priority, contraceptives can and should be used.

The SWI is fully aware of the limitations it has, but attempted a goodie bag drop where a group of students set up a table and handed out bags filled with things including lubricant, condoms and dental dams. The group of students working the drop was prepared for pushback and talked about how to answer any questions people may have had about its intentions.

Geiger and everyone else in the group believed that, since the coalition is not affiliated with NU, it would not be a problem. Geiger said many students took advantage of the goodie bags and were coming to get them until the table was shut down.

Shirha Clemons, the executive assistant for student affairs, was the one to break the news to the group that this goodie drop was not permitted when her office was made aware of the event. Her reasoning was that it was not an approved event and the distribution of condoms and other contraceptive methods is not allowed on campus.

“Campus solicitation and ‘tabling’ in the Gallagher Center requires prior approval by the office of Campus Activities and is reserved for recognized student clubs and organizations, as well as approved outside vendors. Approved solicitation and tabling must comply with university policies. When we became aware that this event included the distribution of condoms, the students were asked to stop the event,” Sheffield explained.

One of the group’s first main goals is to become an official, university-funded club and to receive funding for events to spread awareness of sexual wellness and sex positivity.

“The benefit of becoming a club and having funding is (1) showing that the university supports what we want to do and (2) having financial support so that we can do things and not have to jump through as many hoops that we are currently jumping through,” Geiger said.

The group’s second objective would be to see a variety of safe-sex materials and contraceptives provided by health services and throughout all of the resident halls. The achievement of this goal is partly dependent on the University’s catholic values.

This is where the demands of Geiger and the coalition will run into obstacles.

However, Geiger has a lot on her agenda and she explains that “meetings, meetings, meetings” are the next step to understanding where the church stands with these issues, finding out the “whys,” exploring “the gray areas” and reaching these goals. The group has planned meetings with counseling services, the campus ministry, Rev. Aidan R Rooney, the social work department and health services to find more answers.

Nate Eitler, a sophomore and advocacy chair of the N.U. S.A.G.E. club, is rooting for the coalition’s success.

“I believe that all of their demands are reasonable and I think that, once they work with the university and come to a compromise, we will see a real change on campus in regard to sexual health,” Eitler said.

SWI conducted an informal survey – again, not through the university or any research center. One hundred and seventy-three Niagara University students participated, and 73.8% of students did not know that the office of health services offers STD and STI testing. 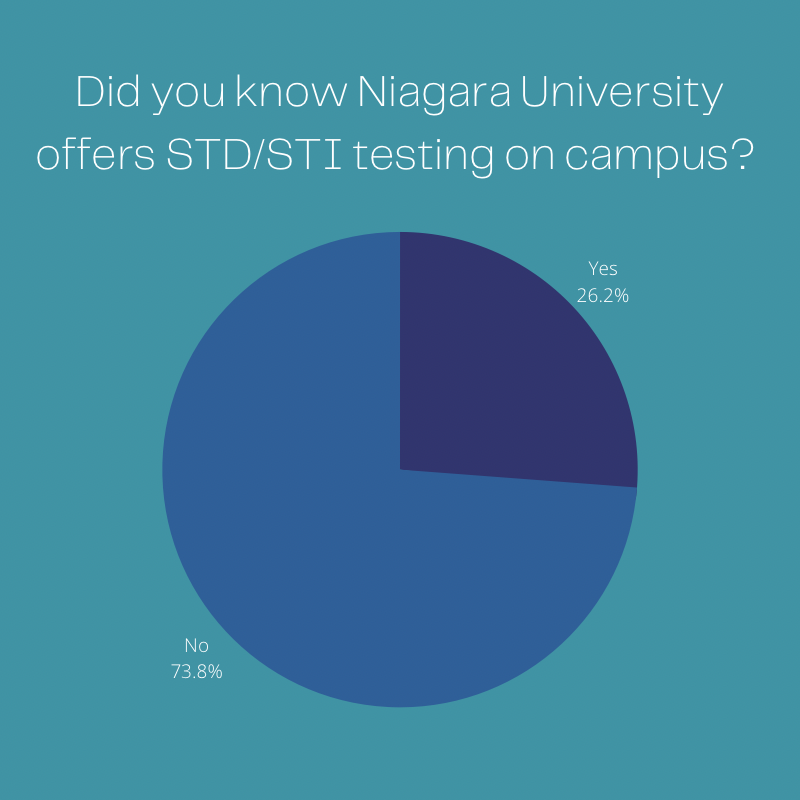 Results of SWI’s informal survey question 9 out of 22.

The SWI is trying to “bring light to what is a national issue,” according to Geiger. According to the Centers for Disease Control and Prevention (CDC) and U.S. Department of Health and Human Services, 1 in 2 new STDs reported each year are among young people 15 to 24. STDs and STIs are common, especially for college students. The SWI would like to see expanded testing inside of Niagara University, for the wellbeing and health of the students.

Geiger explained how, when she talked to the campus ministry, the representatives said they are willing to work with the SWI and join campus conversations about sexual wellness to identify their limits.

Geiger created this initiative with many long-term goals in mind and, since she is set to graduate in May, it was important to her to have younger students involved who can continue to work just as hard to make a change.

“The other leaders of the organization are freshman and sophomores,” she said.

Madeline Goldberg, a freshman and Geiger’s “right-hand girl,” represents the passion inside this coalition.

“It is imperative that we as young adults in college are given educational resources and access to materials to go about sex in a safe and educated way,” she said. “Many sexual orientations and gender identities are not aware of all their options for safe sex and contraceptives, as well as personal care and sexual health and wellbeing.”

Goldberg elaborated on all of the demands of the SWI and how important it is to get the word around and gain support.

She added, “Personally, I am focused on everyone’s sexual wellness voices being heard and attended to. This is not a group focusing on heterosexual norms and education. We want everyone to relate and learn from our initiatives.”

Geiger, Goldberg and the other students involved with the SWI are aware of the obstacles they will run into during the journey to reform. They are fully prepared for many conversations and research to find a way for sexual health, along with education on the topic, to become a bigger deal at NU.

“We love our university. We love the students here. That is why we are doing this. We want to make our university a better place and better for students who come here,” Geiger said.

This is not the first time students at a private and religious university have raised their voices for sexual health education and resources. The Students for Sexual Health group of Boston College is also an informal organization pushing for allocation of contraceptives and advanced sexual education. It has made progress along with colleges including Georgetown and Brown University. Geiger has even noticed the topic being discussed down the road at NU’s rival school, Canisius.

The religious leaders of Niagara University are willing to discuss the SWI’s demands, according to Sheffield and Geiger.

SWI has a lot of plans for the spring semester. It will continue to find a way for students to have access to safe-sex materials, and the goodie bag drops will not be coming to a halt, yet. With passion and perseverance, the organization will work with the university to compromise and, most primarily, focus on the student’s health and wellbeing.