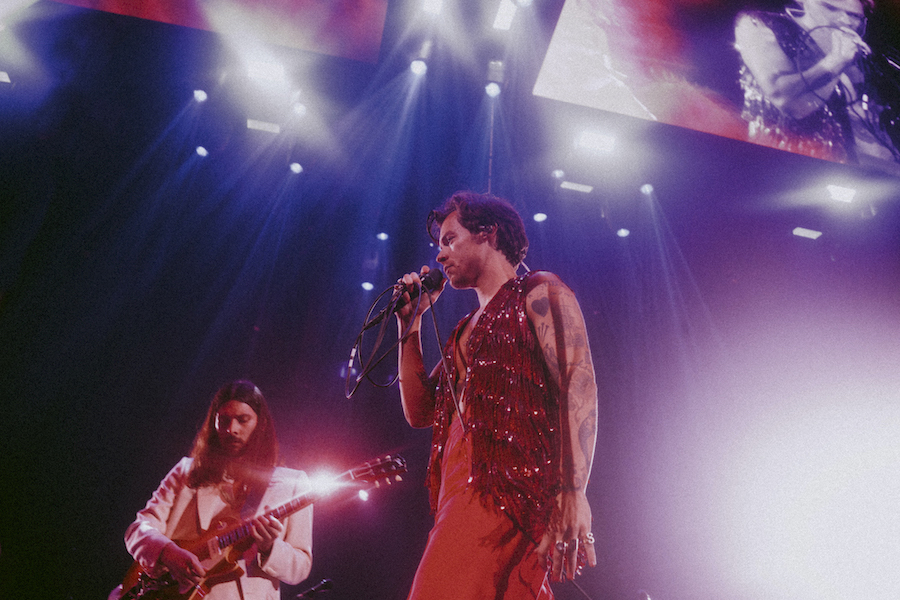 Harry Styles was dressed to the nines during 'Love On Tour'

Clothing has no gender and Harry Styles is just one of many celebrities that prove that. The singer/songwriter has been on tour since the first weekend of September with his opening show for his “Love On Tour” in Las Vegas. He opened his tour sporting a pair of fuchsia-colored trousers and a magenta vest that was covered in sparkling fringe.

Fans all around the world are in awe of Styles’ outfit choices. From sequence to dresses and even a clown costume, he has worn it all over the past three months. All of the performer’s outfits are custom Gucci and his outfits were designed by Harry Lambert.

Styles’ go-to outfit during “ Love On Tour” appears to consist of a pair of colorful trousers, a button-down shirt, suspenders and a pair of boots. The exception to that continuous outfit seems to be on his special nights of the tour such as his three sold-out New York City shows at Madison Square Garden and his two-night “Harryween” event that he dressed up in costume for.

Fans loved the Las Vegas outfit that he sported the first night of his tour.

Erika Haley says “Personally, my favorite outfit has to be the opening night of the tour in Las Vegas. He wore a hot pink flowy vest that showcased his tattoos and he wore matching pants. I think this outfit, in particular, suits Harry the most out of his “Love On Tour” outfits he has worn so far.” 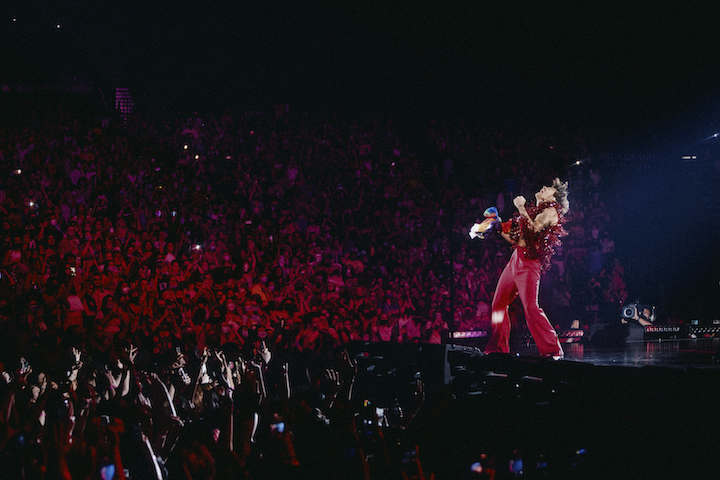 On Oct. 3 and 4, Styles had two sold-out nights at Madison Square garden. The first night he came out wearing an all-black outfit with an open-chest vest that has a fringe from the elbow down. Then the following night the singer wore a sheer white, long-sleeve and black and white polka-dot trousers.

“Harryween” was the place to be in New York City during the Halloween weekend as Styles and his band performed Saturday and Sunday night at The Garden. The New York Times article says, “The costume extravaganza, billed as Harryween, was a hybrid celebration of the pop prince’s florid gender-free style and of a traditional Allhallows Eve a veritable fashion parade that rivaled cosplay conventions and the most fanciful runway shows.”

On Oct. 30, Styles and his bandmates dressed as characters from the classic movie “The Wizard of Oz''. Elin Sandberg (bass) was costumed as Glinda the Good Witch, Niji Adeleye (piano) as Tin Man, Pauli Lovejoy (percussions) as Wizard of Oz, Mitch Rowland (guitarist) as Cowardly Lion, Sarah Jones (drums) as Wicked Witch, Ny Oh (piano and vocals) as Scarecrow, and lastly Styles sported a custom Gucci dress and sparkly red heels as he was Dorothy. The following night, the entire band all dressed in clown costumes in honor of their Halloween show.

Fans of Harry Styles call themselves “Harries,” and his fans are not only big supporters of his outfits but they are inspired. Whether Styles is causing controversy by wearing a dress like in his Vogue cover shoot or he is simply wearing a t-shirt and jeans the “Harries” are in love with whatever it is that he is wearing.

Fans love what he has been wearing recently during “Love On Tour.”

One superfan, Paige Smith said “I seriously love everything Harry has done for his tour fits this year he looks so confident and happy. I feel like that’s Harry’s signature look: confidence.” also saying “The fits for ‘Love On Tour’ scream love yourself and be confident, makes me proud to be a Harry fan.”

Or there is Isabella Martinelli, who has had the pleasure of seeing Styles perform twice during “Love On Tour” she says “A lot of the time, Harry gets criticized for his outfits being too ‘feminine’ but I believe he’s helping the world move away from the negatives that stem from toxic masculinity. I believe that they truly match his personality very well as he has an amazing on-stage presence. His outfits have sparked so much creativity from fans, and attending a concert is so surreal because everyone is dressed inspired by him. He really has had a big impact on the style inspiration for young adults and fans, and he does it unapologetically.”

His tour outfits over the last three months have left fans speechless and emotionally moved. To them, it is more than just a button-up and trousers, it is about them being able to express themselves and not feeling sorry for dressing however they please. Styles continues to always impress his fans and it is not just because of his rocking set-list that features songs from his two albums “Harry Styles” and “Fine Line,” but because of his dazzling outfits that go against gender norms and his ability to act on his motto of “treat people with kindness.”

While the last show of “Love On Tour” for the United States leg is on Nov. 28 in Long Island, New York. Fans have nothing to worry about when it comes to possibly not getting context from the singer for a while.

On Nov. 5, the Marvel movie “Eternals” started screening in theaters. Movie fanatics can spot Harry Styles as Eros (the brother of Thanos) in the post-movie credits. Styles recently said, “But who didn’t grow up wanting to be a superhero, you know?”(Dazed Magazine 2021 winter issue) That is some great news for both Marvel fans and Styles fans as this sets the possibility for Styles to star in more Marvel movies in the future.

Fans can also watch Styles in the soon-to-be-released movie “Don’t Worry Darling” which also features Florence Pugh, Nick Kroll, Gemma Chan, and Chris Pine. The movie is set to be released on Sept. 23, 2022. Styles will also be acting in the upcoming movie “My Policeman,” that movie has no set release date yet, but it is projected to air late 2022 or early 2023.

With new movies, a new beauty brand, a couple more shows left in the United States for “Love On Tour” fans welcome these events with wide arms as they prepare to see more content and show-stopping outfits from the singer/songwriter and actor that they adore.