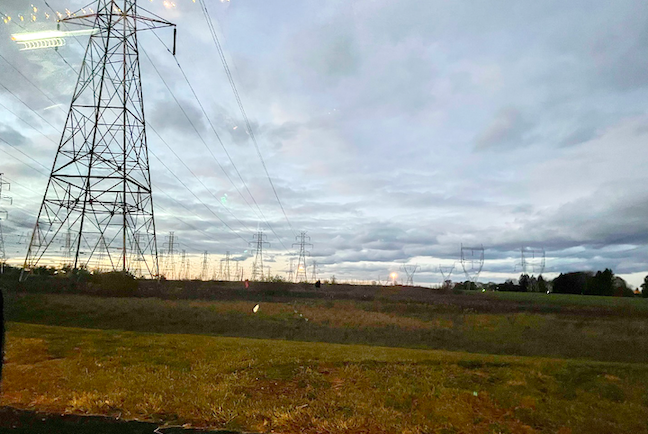 This former landfill off I-190 could be a perfect spot for a solar farm.

Community solar: Is it worth it?

The introduction of large-scale solar power into communities like Lewiston has been a hot topic for debate over the years, splitting residents of the town and members of the surrounding communities on whether the alternate energy source is even worth it.

Lewiston’s 14-month moratorium on new, large-scale solar projects ended in December of 2020, giving way to new laws to regulate solar farms that would provide power to many communities in the region. Lewiston’s zoning laws were updated in the same month to include regulations on “utility scale solar systems” within the town’s borders. The revised laws specify that these specific types of solar arrays can only be built on land designated as rural residential or industrial, which the zoning code designates as land used for industrial purposes such as factories and warehouses. Rural residential land is stricter in its use for solar panels as RR can be used for a variety of uses such as houses, farmland, churches and, under special use permits, solar arrays.

What is community solar?

Many states in the country have turned to solar as a renewable energy source as it is cheap, reliable and can be installed in large areas with minimal impact. Community solar is where a company will build a large solar array and tap into the local power grid, relieving some of the stress on the existing power system. In most states, residents who decide to use power from these solar farms can lease or buy a portion of the farm, paying for its maintenance and operation, and as an incentive can receive a credit on their electricity bill.

In the Buffalo-Niagara region, residents might not think there is a need for solar panels because of the Niagara River.

That hydro plant was built as a federal initiative, and they (New York Power Authority) are required to allocate so much power to downstate as well as several surrounding states,” said Dr. Mark Gallo, a biology professor at Niagara University, and chair of the sustainability committee at NU. “Oddly enough, that means that some of our local energy does not even come from it.”

Putting in solar panels may be crucial to the power needs of the region as other power plants like the Somerset Coal Power plant on Lake Ontario was recently decommissioned. It generated over 650 megawatt hours of electricity, powering more than 350,000 homes, including Lewiston A 2,000-acre Solar farm like the one planned in Hartland can produce 300 megawatt hours, powering a little over 120,000 homes.

Solar, of course, provides a far greener alternative to fossil fuels and coal, with no emissions of carbon dioxide, methane, and sulfur dioxide - all dangerous greenhouse gases. It is also much more green than other renewable energy sources like nuclear, which its waste is still not able to be safely disposed of.

The problems with solar

With the rise in global temperatures and ever-increasing need for energy, scientists and energy companies run to renewable sources of energy like solar because of its eco friendliness and reliability. But solar itself may not be the perfect solution. Many scientists argue that solar power is. On average, solar panels only convert up to 20% of sunlight they collect into actual usable energy. The rest of the sunlight just warms up the panels and the surrounding area, which studies have shown to increase the increase the local temperature by 3-4℉. This may not seem like a lot, but when you have many large solar farms, it can add up.

Other issues with solar are involved with the actual manufacturing of the PV Cells and panels, which consist of materials such as cadmium, tellurium, silicon, and gallium. These raw materials are mined and refined using pollutive methods that produce more greenhouse gases and toxic byproducts. The panels also use certain hazardous chemicals such as Hydrochloric Acid and Arsenic, which can cause illnesses along with cancer.

Along with these, the more obvious issue with solar farms is their placement.

“They (solar panels) can be a real eyesore, especially when they are in big farms that you can see from the side of the road,” says Mary Capitano, a Marketing student at Niagara University which is located right next to the New York Power Authority. “I think even seeing the power lines from campus sucks.”

Others in the community are concerned with the hastiness that towns like Lewiston have with changing their laws to accommodate solar farms. “Solar farms are going up too fast without any long-term plan in place” Lewiston resident Johnathan Schulz said. “I would say no one knows what it will look like in 25 years and really aren’t planning for it.”

A big reoccurring issue with solar panels and renewable energy in general is storage. Many forms of renewable energy produce much more excess power than needed. The problem is, we don’t make that big of batteries… at least ones that everyone can agree on. Like solar panels, many people would prefer not to have large, noisy metal boxes when they look out to their backyard.

One solution to this problem is hydrogen.

“Hydrogen can be produced from wind or solar through electrolysis. This is easy to store, has a high energy return, and produces water vapor as its waste product.” Gallo said.

If companies can perfect this technology, then community solar could be a serious contender against fossil fuels as a source for the country’s energy crisis.