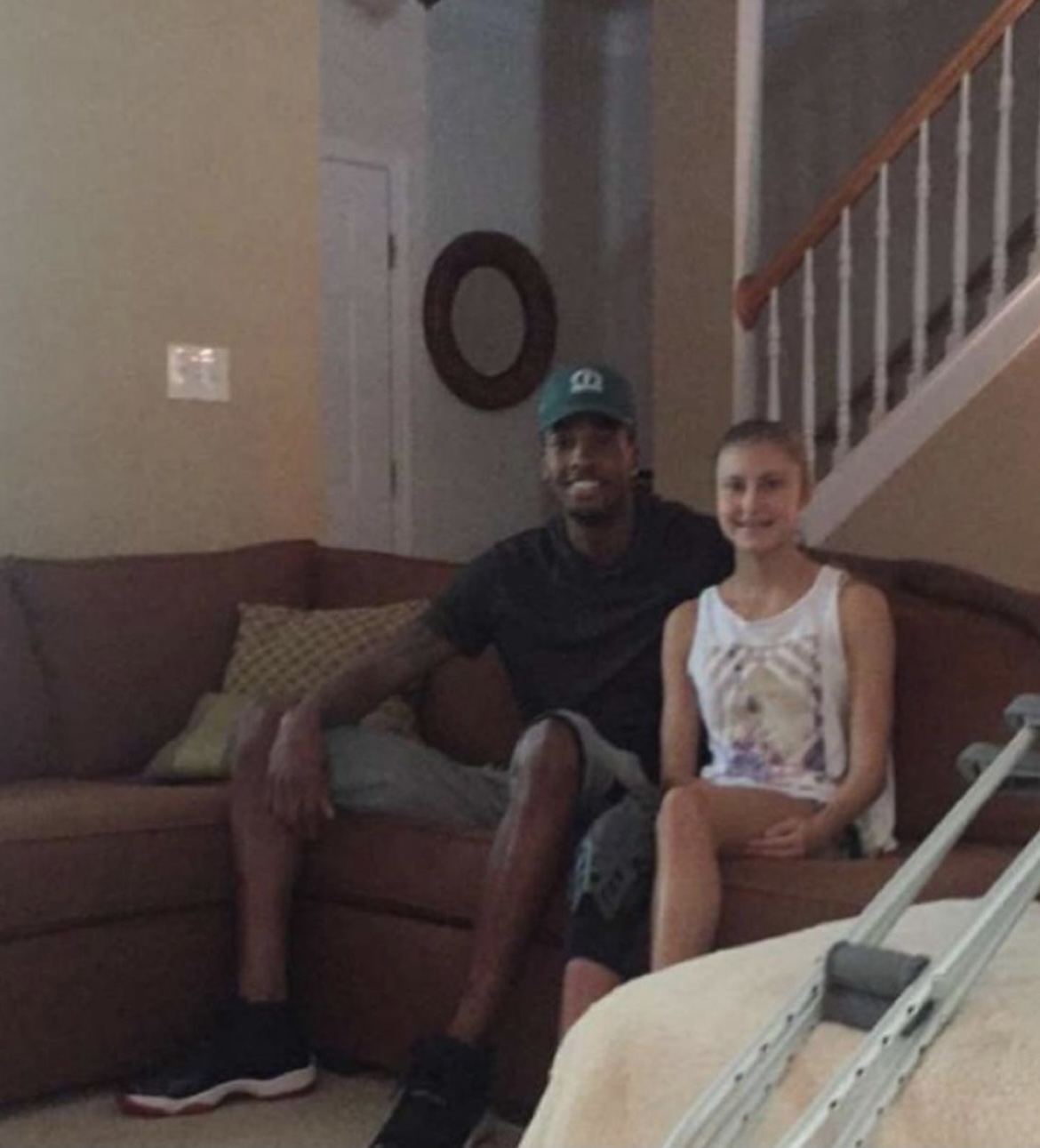 Who is Dirk Williams?

Dirk Williams is a professional shooting guard for the London Lions basketball team in Hackney Wick, Greater London. Dirk Williams is much more than just a professional basketball player; he is a caring, determined individual who did everything he could to get to where he is today. He became a part of my life by transferring to Williamsburg Christian Academy in Williamsburg, Virginia his senior year of high school. When he came to WCA he became part of the men’s varsity basketball team which my dad, Chris Gann, coached at the time. Gann knew coming to WCA was difficult on Dirk’s family financially and academically as he struggled with some of his classes and grades. His father moved for work from Williamsburg to Newport News with no vehicle, Dirk ended up staying with his aunt and grandma in Williamsburg for a while, but it became very difficult for both him and his family. Gann and Dirk’s father decided it would be best if Dirk came to live with our family for the last six months of his senior year.

Moving into the Gann house

“I knew it would be the best decision financially and academically for us to take Dirk in and help him as much as we possibly could,” speaker said. The first few weeks were intimidating and even a bit awkward but overtime the Gann family became extremely close with Dirk. “I think of him as Anna’s older brother and I still do to this day,” stated my mom, Shari Gann. Dirk and I became extremely close over the time he spent with us, and he continued to become successful academically and athletically. “Dirk was always so kind and loving towards Anna and seeing them together made me so happy every time I came over, I could tell how much he cared about her,” stated Holly Tyranski my best friend growing up. 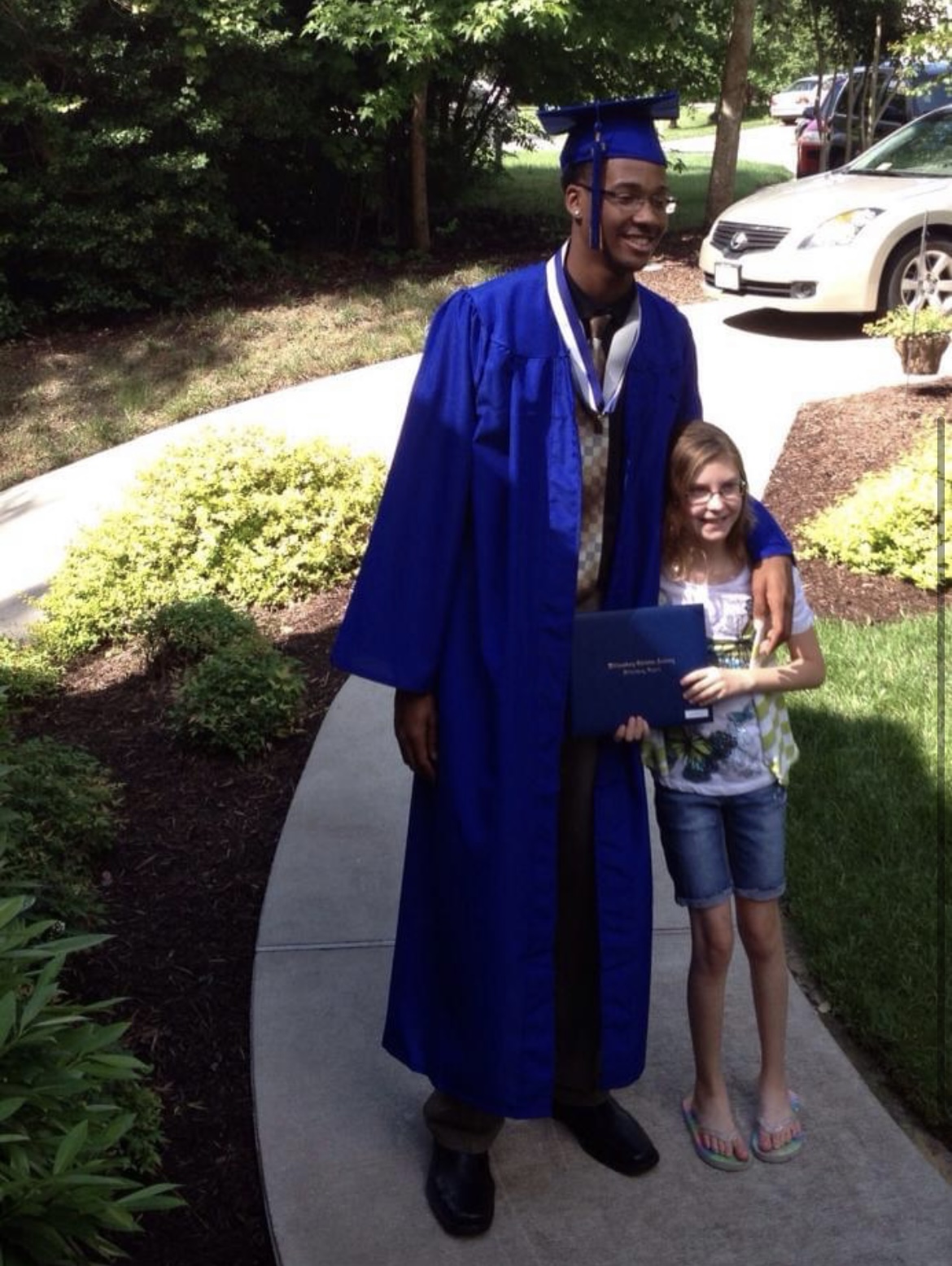 Dirk and Anna on his high school graduation day from WCA.

Coming from knowing nobody to having extremely supportive teammates and friends at WCA, Dirk continued to thrive and quite literally carry the team his senior year of high school. Dirk scored the most points for the team at if not all the games, most of them. His senior year he was recruited by many colleges including ACC division 1 college Virginia Tech.

Dirk decided to reclassify his senior year and play another year with WCA to improve his grades while being able to continue playing the sport he loves with his teammates. “Halfway through the season of his senior reclassification year he was denied to continue playing basketball and had to forfeit all games he played in that year,” Chris Gann stated. Although he was not allowed to play, he continued to support his team by coming to every single game and cheering them on. “This definitely showed Dirk’s true character,” said Shari Gann.

After coming from such struggle financially and academically, Dirk overcame all obstacles and got a full scholarship to Tallahassee Community College in Florida. After finishing school there, he announced his full scholarship commitment to the University of Alabama Birmingham to study business and continue playing basketball. Our entire family was so proud of Dirk and everything he went through to get to where he was. Seeing Dirk become so bright and inspirational was the best part about it. He inspired me and is part of the reason why I am a student-athlete now in college. He proved to so many people that anything is possible if you put your mind to it.

Dirk’s faith is an extremely important aspect in his life and helped him become so successful. He has Philippians 4:13 in his Instagram bio which states “For I can do everything through Christ, who gives me strength.” To follow Dirk on Instagram search @dirkwilliams_11.

Continuing throughout his college career at UAB he kept thriving and becoming even more successful in his passion of basketball. His senior year “he started in 30 of the 33 games in which he appeared and averaged 28.7 minutes per game.” He also “ranked third on the team with 10.5 points per game to go along with 3.4 rebounds per game.”

To read more about his success at UAB visit https://uabsports.com/sports/mens-basketball/roster/dirk-williams/523.

As Dirk kept playing basketball in college so far away from the Gann family he kept in touch as much as he could. The family watched his games as frequently as they could. UAB played Old Dominion University which is only an hour away from where the Gann’s live. That night we went to the game and got to watch Dirk play again. “I felt so proud to see Dirk play, even though it was different not being the one coaching him,” stated Chris his former basketball coach. It was so exciting to watch Dirk play basketball again, it made me so proud and emotional and since I was older it felt more memorable. 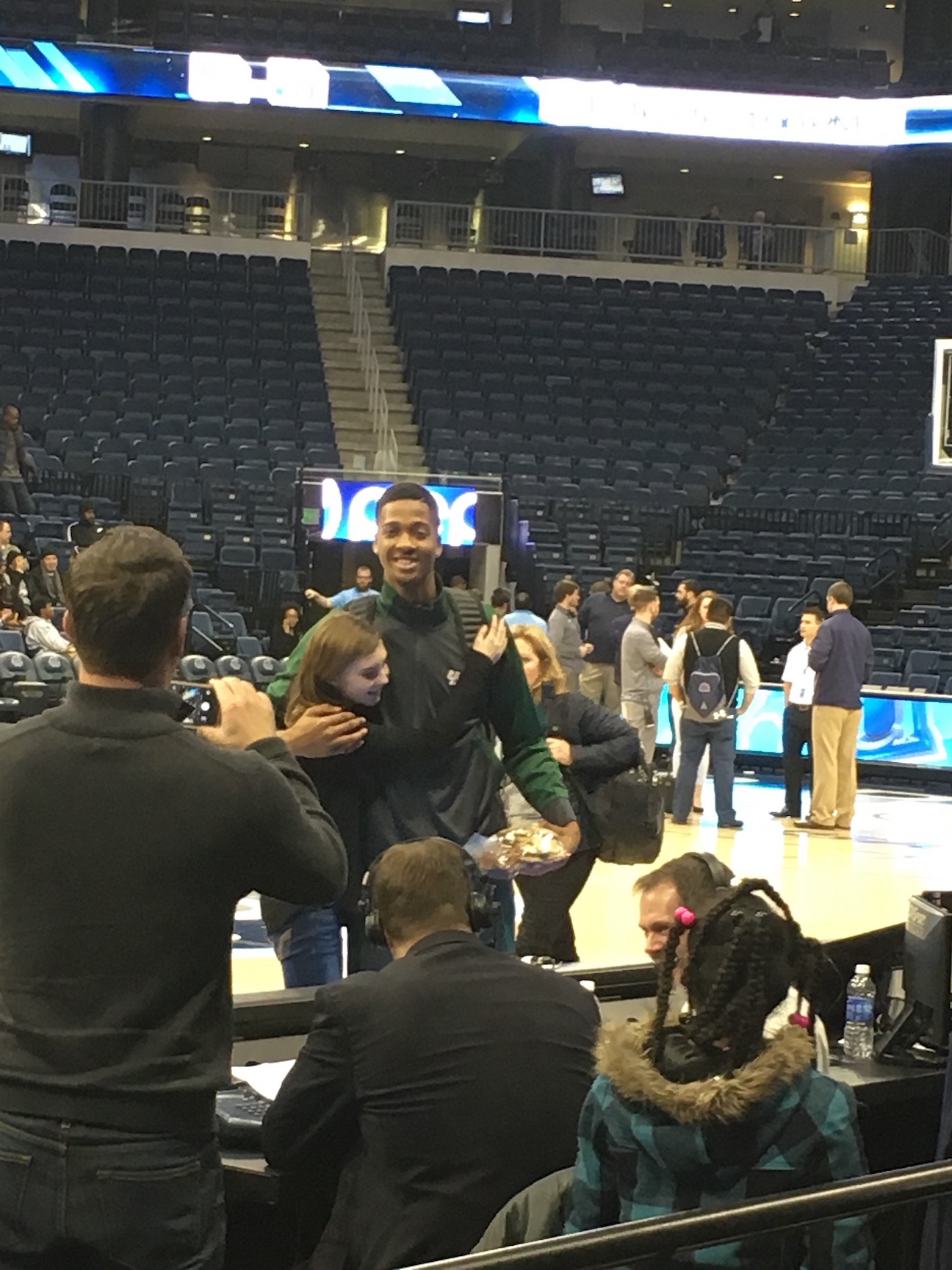 Anna hugging Dirk after his game against Old Dominion after not seeing him for over a year.

Where is Dirk now?

Dirk is now playing professional basketball in England for the London Lions. Other than Basketball Dirk is now happily married to Gemma Williams, and they have an adorable two-year-old son also named Dirk. “Seeing his growth, success, and maturity throughout the years makes me emotional and extremely proud as a mother myself,” stated Shari.

Success on the London Lions

Since joining the London Lions Dirk’s basketball career is continuing to thrive. He continues to achieve his goals and push himself to be the best player he can. “Dirk Williams averaged 18.3 points, 3.6 rebounds and 2.3 assists per game and set his season-high with 37 points in 40 minutes against the Manchester Giants on December 18, 2020.” To read more about Dirk’s basketball career with the London Lions visit https://www.proballers.com/basketball/player/175202/dirk-williams.

Dirk proved that success is not about how much you have but is about what you make out of what you have. His talent in basketball is such an incredible gift from God that inspires so many people around the world. I am so honored to have been able to become so close with such a determined and strong individual.

How Dirk inspires me

Dirk inspires me to push myself in my athletics and succeed in everything that is possible. The amount of care he has for his family and friends is immaculate. Growing up around someone so determined to become successful with so little help, made me realize how lucky I am to have the life I have. Dirk is the reason I push myself so hard in my sport because throughout my entire life I had all the support I needed, I had a financially stable family, I had no extreme struggles throughout my life. Him going through a rollercoaster ride to get where he is today is the reason I try on the tough days, the reason I am still doing my sport at the division 1 level today.

To this day Dirk will always be considered family to the Gann’s. I consider him my brother, he cared for me and treated me as if I was his little sister and still does, I wouldn’t trade him staying with our family for anything. Meeting Dirk will always be a huge part of my family’s life and we will be forever grateful to have him in our lives. Thank you, Dirk, for being the best brother anyone could ask for. 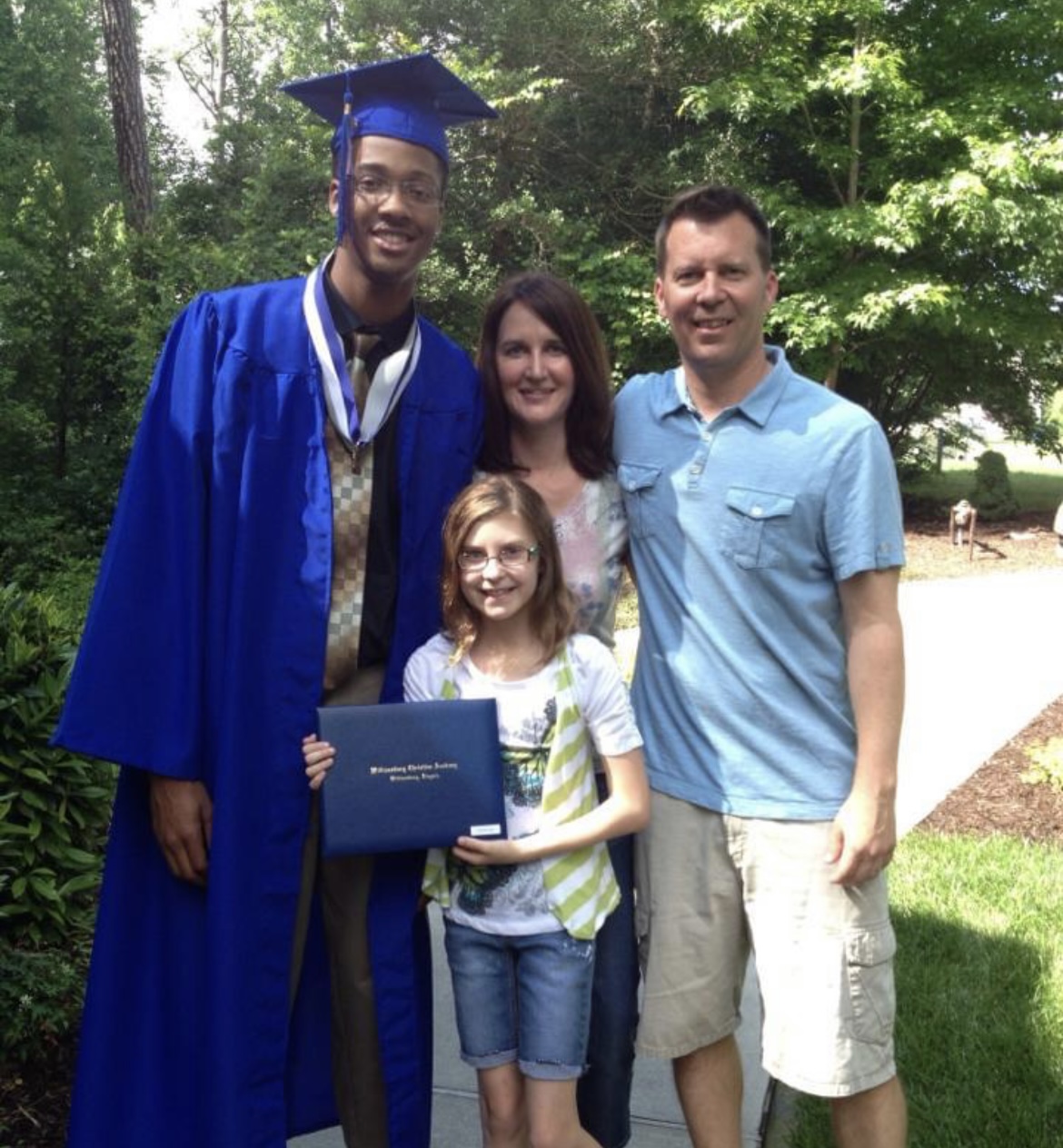 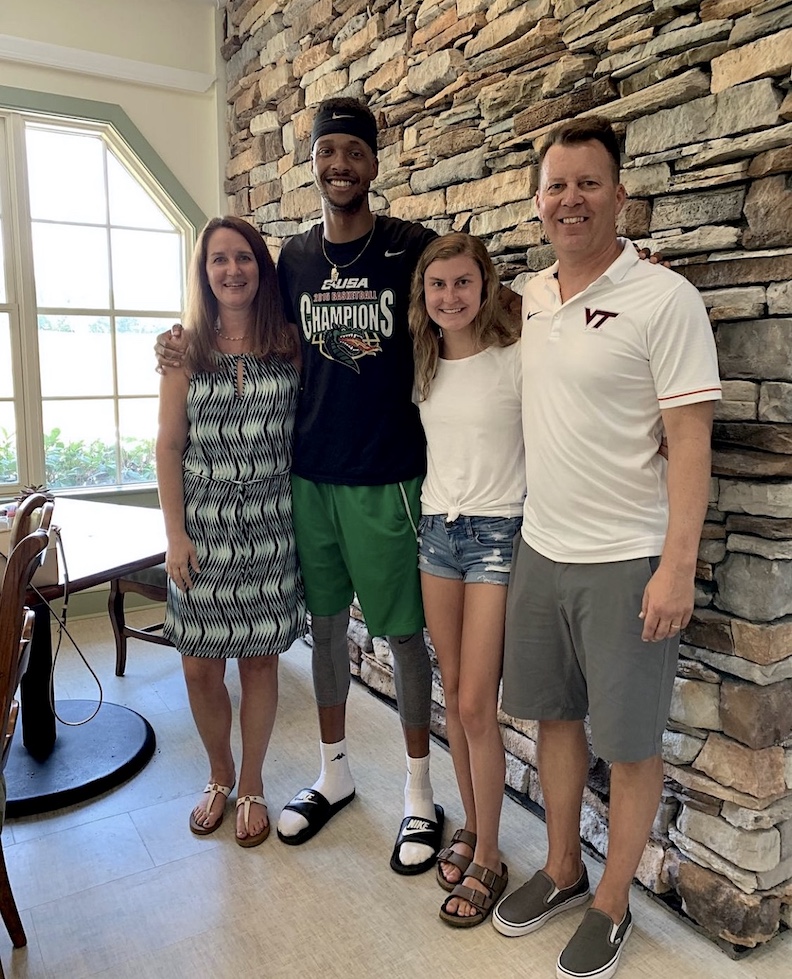 Recently, Dirk came to visit the Gann family and catch up on each other’s lives.