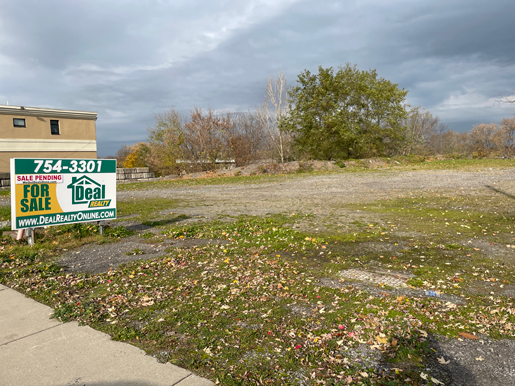 This piece of land is being considered for a new build, potentially an urgent care center. Applicants are said to be interested in using a driveway that would extend behind the APlus/Sunoco gas station and down North Ninth Street.

Empty Center Street parcel might not be vacant much longer

The Village of Lewiston Planning Commission on Monday granted preliminary site plan approval for what was described as a national urgent care company to erect and operate a structure at 860 Center St. The parcel has been vacant since April 2012, when the building that now houses the Niagara River Region Chamber of Commerce office was transported from the site and moved across the street to Academy Park.

Architect Jim Fittante spoke on behalf of the unnamed applicant. He said a quick-care medical center would provide “very low traffic” compared to alternative site uses. The lot has long been rumored to become a national fast-food chain location, but that will likely not be the case now.

His first submission calls for a 3,546-square-foot building with a peak height of 22 feet sitting adjacent to a 36-space parking lot, with ingress/egress points at both Center and North Ninth streets. The latter driveway would utilize an existing, unused path that curves behind the Sunoco gas station/APlus mini-mart.

Style, colors, landscaping and hours of operation are to be determined. The project, as it stands now, is not expected to require any variances.

A handful of neighbors expressed concern about an urgent care center possibly staying open 24 hours a day, with lights extending over the cliff and down into the residential neighborhood. They questioned the viability of the driveway, and the practicality of adding a sloped pathway onto Ninth Street – which is historically tricky to navigate in slick, winter weather conditions.

A letter was read from Onondaga Street resident Christopher Budde, who owns Brewed & Bottled Craft Beer Shop. He stated, “I am not opposed to the development of the property but, as with all others, it must be done with the safety and concern of the residential neighbors that surround it.

“My main concern is the driveway connection that would be connecting to Ninth Street. In my opinion, this connection is going to worsen an already dangerous stretch of the road. My property is on the intersection of Ninth and Onondaga. We witness not only people running the stop signs, but recklessly driving and speeding daily. Any connection to that street is going to create a scenario where there will inevitably be an accident, whether it’s from negligent drivers or weather-related issues on that hill.

“Furthermore, that exit will cause a quality-of-life concern for the renters of the apartments that it runs behind and ourselves. With the potential for bright lights and traffic noise – no matter the amount of traffic – we will not be able to quietly enjoy our properties. This could also decrease the property/rent values for not only ourselves, but the family that owns and rents the apartments on Onondaga and Ninth.” 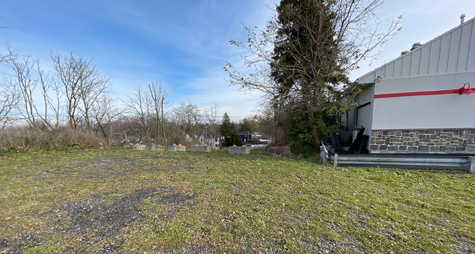 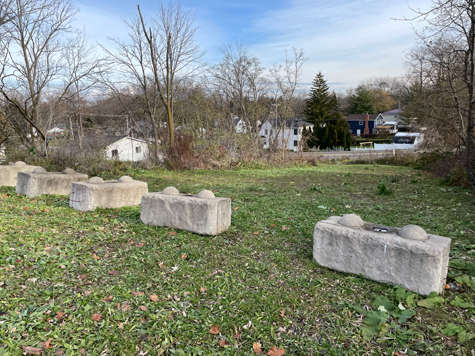 This piece of land is being considered for a new build, potentially an urgent care center. Applicants are said to be interested in using a driveway that would extend behind the APlus/Sunoco gas station and down North Ninth Street. 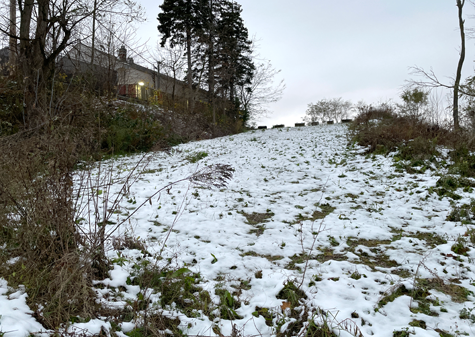 Planning Board Chairman Norm Machelor said, “I’ve had some comments … about exiting on Ninth. I’ve had a suggestion that maybe Ninth should be in-only, it shouldn’t come down the hill and then, when they get to the base of the hill, they’re at the base of another hill. It’s awkward.”

He later added, “I’d like them to consider not using Ninth Street.”

Fittante said a geotechnical civil engineering study and ground compaction review would be required, to ensure soundness and stability before any road or structure is built.

A second site plan submission is tentatively set for the Dec. 13 Historic Preservation Commission/Planning Board meetings. These sessions are open to the public and begin at 6 p.m. in the Red Brick Municipal Building, 145 N. Fourth St.

Neither he nor Fittante are permitted to name the project applicant, as the sale is not complete. In fact, a purchase is contingent on final site plan approval.

Regardless of the name on the door, Mayor Anne Welch said, “I think it’s a great addition to the village.”

The proposal requires approval from the Niagara County Planning Board based on project location (Center Street is a New York state right-of-way).

In addition, “As we did (with the new plaza), we ask the chief of police for his recommendations, and also (New York State Department of Transportation). … That’s something that we would look to be getting from them, too,” Welch said.

“The basic idea is to be able to divide the northern side of that lot, and to allow it to be sold,” Machelor said.

This subdivision enables the International Peace Garden to remain on a lot with the “Little Yellow House,” which the municipality is keeping.

Welch explained, “The village is going to sell this lot that we’ve had for years, speaking of the “Big Yellow House.” “Obviously, we're not supposed to be in the real estate business. The Arts Council, we had the Arts Council housed there. We did not charge them rent or anything, but they've been there for years. They initially started out here at Red Brick, and then when the sale came up, I talked to the Arts Council and they were fine about moving – and actually they were kind of excited about coming back here.

“So, that being said, we have to subdivide that property to sell it off, because the back half of it still goes into the Peace Garden – because we own both lots. So, that little piece that we're subdividing off will be resubdivided back into the remaining lot with the ‘Little Yellow House.’

“The courtyard and the ‘Little Yellow House’ will be one lot, and then the other lot will be the parcel that we're going to sell.”

That for-sale property is zoned R-B-2, or commercial, and the existing building – though sentimental – is not historically designated.