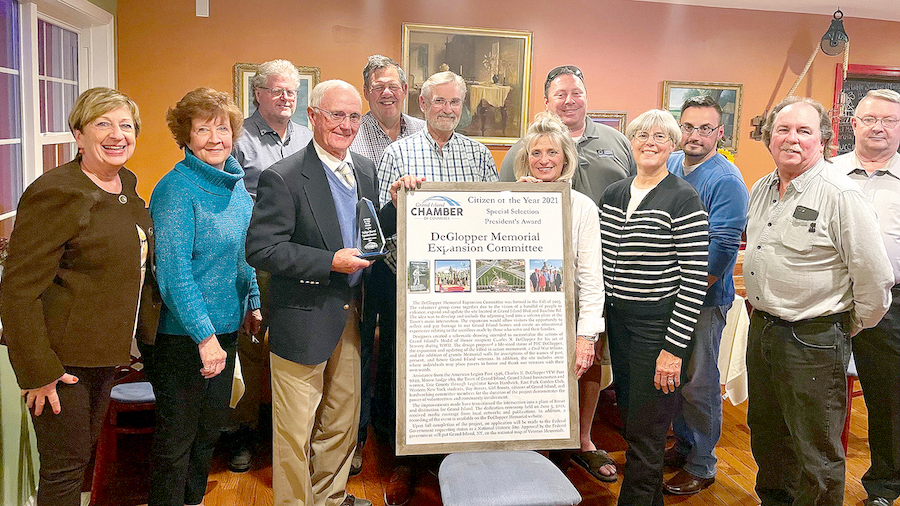 The tables were turned on Dan Drexelius last Sunday evening and, by the look on his face, he was caught totally off guard – but humbled and speechless by the gesture.

Double D, as he is known, was the project manager for the DeGlopper Memorial Expansion Committee and he was hosting a dinner at Zobud’s Bistro on Whitehaven Road as a thank you to the volunteer committee. It was a celebration of the President’s Award the group received at the recent Chamber of Commerce’s Citizen of the Year Awards Gala.

Before dinner, Double D stood and eloquently thanked the members for their hard work and dedication. The committee began meeting in the fall of 2015 to discuss a memorial to honor Pfc. Charles N. DeGlopper, the Island’s World War II hero.

After Drexelius’ comments, Ray DeGlopper, the 80-years-young, soft-spoken vice chair of the committee – and the war hero’s nephew – asked Double D to stand before saying: “Dan, on behalf of our entire family and this committee, we present you with this plaque as a show of our appreciation for your hard work, dedication and commitment to this project.”

The plaque, with an aerial photo of the memorial at the top, has the following inscription: “In recognition of your outstanding efforts in the creation and development of the DeGlopper Memorial. This complex project became a reality as a result of your vision, perseverance, dedication, knowledge and expertise. Our Grand Island community will be forever grateful for this wonderful memorial for our Military veterans.”

Drexelius, emotionally moved by the presentation, looked at DeGlopper, smiled, and simply said with sincerity to him and the committee members, “Thank you.” 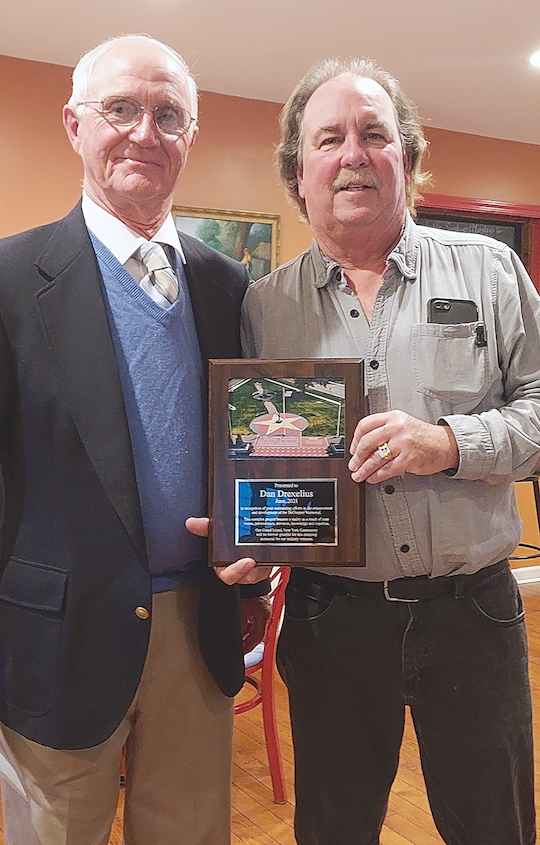 Ray DeGlopper, left, surprises Dan Drexelius with a plaque to thank him for his role as project manager of the DeGlopper Memorial Expansion Committee. (Photo by Michael J. Billoni)

The committee held its meetings there, as does American League Post 1346, of which veteran Ray DeGlopper is commander.

During the dinner, the committee commented on the many positive comments it has received from Islanders and visitors to the memorial at the intersection of Grand Island Boulevard and Baseline Road since the June 5 dedication. Drexelius said there are still a couple more items to be obtained for the site and, once the project is complete, an application will be presented to the federal government requesting status as a National Historic Site. Once approved, Grand Island would be on the national map of veteran memorials, which will be another tribute to the hard work and dedication of this committee.

Members will continue their grassroots fundraising efforts to repay a loan needed to complete the project. Secretary Elsie Martino said there are still many different giving opportunities for donors and anyone who would like to make a tax-deductible donation. Call or text Chris Taylor, the fundraising chair, at 725-5750 or Martino at 867-7772. Forms required to purchase granite stones, pavers and Memorial Wall inscriptions are available at www.DeGlopperMemorial.org or the DeGlopper Memorial VFW Post 9249, 2121 Grand Island Blvd.