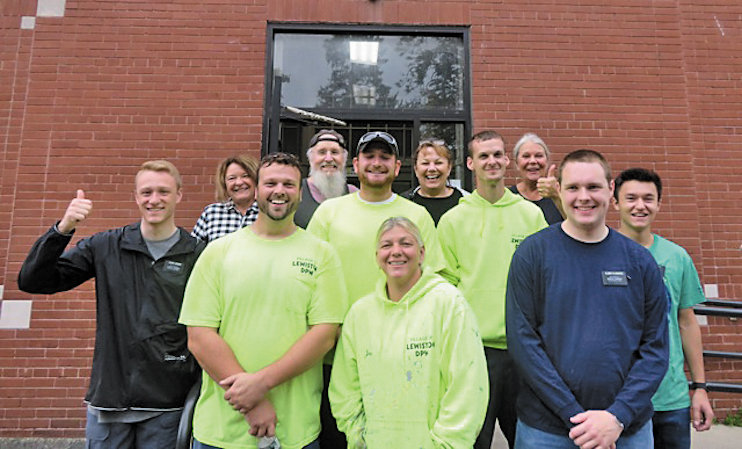 Lewiston Council on the Arts moving headquarters to Red Brick

The Lewiston Council on the Arts is moving from the “Big Yellow House” on Ridge Street to the top floor of the Red Brick Municipal Building (above the clerk’s office) at 145 N. North St.

“It's a beautiful space; a freshly painted corner office where the sun streams through huge, new windows. It feels like home, because it's located right across the hall from where we first started more than 25 years ago!” Executive Director Irene Rykaszewski and Artistic Director Eva Nicklas told NFP in an email.

Of course, the current LCA office is located within a house that has rooms for costumes, props and other items used in a variety of festivals and events. Fortunately, “The village also gave us a convenient storage room right across from the office,” Rykaszewski and Nicklas said. “On a positive note, this move has forced us to edit, downsize, reorganize and prioritize, and will get us poised for the next phase of the organization.”

Materials have begun to be moved, and “Internet and phone service is being transferred on Friday, Nov. 5,” Rykaszewski and Nicklas said. “We may still have a few things left to bring over, but we'll be working out of the new office after that.”

The Village of Lewiston owns the “Big Yellow House.” Mayor Anne Welch said the municipality will sell the building.

“I have a package that I'm going to send out to all the Lewiston Realtors – to be fair – and ask for their proposal to sell the house,” she said. “And then (village counsel) Joe Leone will choose which one, because he's also a real estate attorney.

“I said, ‘I don't want to be involved in it.’ Because I don't want people saying, ‘Well, it's your cousin or friend, or she likes them better than she likes us.’ Everybody can have their chance at it.”

She noted, “There's interest in it already.”

Welch also reiterated what’s been said at Village Board meetings for several years now: The municipality doesn’t want to be in the real estate business.

“I said, ‘We really shouldn't do this.’ And Joe Leone agreed with me, and we just took it from there,” Welch noted. “I said, ‘Let's sell this house.’ It's zoned restricted business, so it can be commercial. It's a great place for an office or whatever. And we'll maintain the courtyard and the ‘Little Yellow House’ in front. We’ll keep that. The property line will be just off the back of the house, just to give them access to the back. But other than that, the courtyard will stay the same.”

Welch said she would speak with Treasurer Stephanie Longwell with regard to where building sale monies would be transferred. “It will be nice to have a chunk of money to use for different projects in the village.”

The LCA did not pay rent to the village for use of the “Big Yellow House.” Welch said that arrangement will continue at the Red Brick.