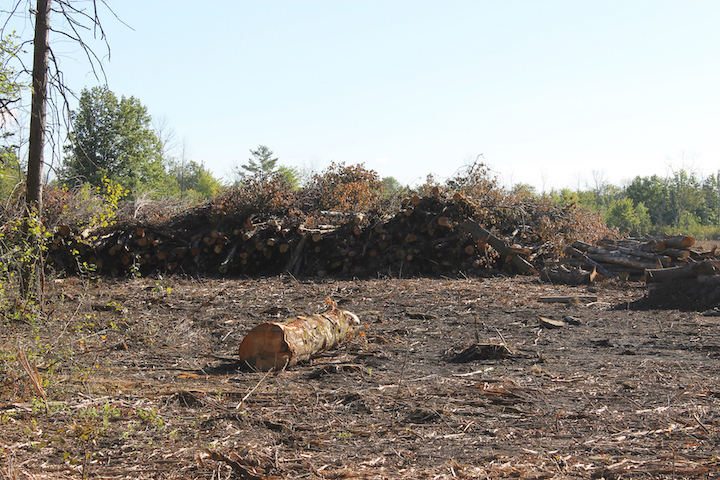 Trees have been cut in several large areas to make way for eventual roads and houses on land along Baseline Road from Love Road north to Staley Road. It's part of Phase I Development for the Southpointe Planned Development District. The site is bordered on the east by I-190/South State Parkway. (Photos by Karen Carr Keefe)

Recent tree-cutting on swaths of land along Baseline Road from Love Road north to Staley Road is a clear sign that phase I development is underway for the Southpointe Planned Development District. The site is bordered on the east by I-190/South State Parkway.

The development has been on the table for 20 years in one form or another by prior developers. Now Southpointe is finally putting its mark on the land at Grand Island’s south end in a project that aims to plan a use of the acreage that limits population density and offers services and amenities to its eventual residents.

Public comment on the Southpointe project was largely unfavorable at Tuesday’s regular Town Board meeting, with concerns raised by critics that the development, as a whole, is not responsible development and is proceeding in a way that could hurt residential neighborhoods adjacent to the project.

However, a representative for the developer maintained the project is proceeding responsibly and debated what he characterized as negative statements made by a member of the Town Board in the earlier workshop meeting on Tuesday.

The comments got quite heated at times between the developer’s representative and Town Board members trying to understand each other’s point of view.

There are 565 total units in the proposed 284-acre PDD, with separate subdivisions. There would be 103 single-family lots in an early phase and 150 townhouses would be part of a future phase of the development. Also in the plan are 168 assisted living units and 144 mid-rise apartments.

First to speak during the public comment section on agenda items was Cathy Rayhill, a board member of CRED-4GI, a group of some 2,000 members favoring responsible Grand Island development.

“Two things in particular I’d like to point out,” Rayhill began. “One is , I was told that … as a part of phase I of any development that went on at Southpointe, that the sewer work would be part of that. Now, given how much of that land has been clear-cut, that has to affect run-off, storm water; and a lot of the folks in our group have expressed concerns that the sewer work is not being completed in conjunction with that and will have a detrimental effect on the homes surrounding that area, if that’s not done.”

Secondly, Rayhill said, “The PDD designation for that particular development should, by the zoning laws of Grand Island, have been rescinded after five years, and this board did not take action to do that. So when we say there’s nothing we can do, I beg to differ. I believe, because it has been over five years since that PDD designation had been awarded, that it should have been rescinded before the first tree came down.”

Sandra Nelson said, “I wondered the other day, how many trees are we cutting down on this island? We live on clay. What soaks up the water, the wetlands? And then we use it anyway. Really stop and think about – what are we doing? Those trees have been there a long time – for a reason. Everybody in my neighborhood (says): ‘They’re cutting down all the trees.’ And then you drive by and the water is just sitting in their yard. And it’s just like, hadn’t you thought about that to begin with? It’s just food for thought for all of you.”

Jeff Palumbo from the Barclay Damon law firm, representing Southpointe, said he took exception to comments made by council member Mike Madigan during the workshop session prior to the regular meeting.

“This is the second time he’s called myself and Mr. Scheid dishonest,” Palumbo said.

“So let’s talk about the facts,” Palumbo said. He said there was not one tree removed from the designated Southpointe Public Trail, and he said that all was done properly.

“The trees that have been removed are only the trees in the area that have already been approved in the concept plan,” Palumbo said. “So, somehow, we’re criminals because we have a concept plan that shows where the development will take place and we removed those trees.

“Everyone knew we needed to clear those trees. We had a meeting with the town supervisor and the engineer specifically to discuss the issue of the tree removal because of the wetland delineations expiring.”

Palumbo said the developer has already met with three different builders who are “chomping at the bit to buy individual sections of this plan.” He said the minute they get final approval, there will be sales. “And those builders will be in there putting roads in. That’s why we’re cutting the trees. That’s why they’re all being cut at the same time.”

Palumbo said he would expect an apology for negative comments made. “And I would expect that you would tell the truth from now on, and the facts.”

Town Supervisor John Whitney, previously town engineer, had some comments about the method by which land has been cleared.

“I was under the impression that the clearing was only going to be on the trail,” Whitney said. Palumbo countered that the developer showed their clearing plan to town officials.

Whitney continued, “We see master plans for large subdivisions, multiple times throughout my years as town engineer. I have never seen any developer come in and completely clear an area as large as what yours is, all at once. They typically do it by the phase they’re developing.”

“The difference is that you are selling this to many different developers – builders,” Whitney said. He explained that, typically, the developers Grand Island has seen have been individual owners developing sequentially in phases and not selling off “five phases to five different builders or developers.”

Madigan defended his previous comments made in the workshop session, but also defended the developer’s right to proceed with the project.

“What I said earlier, and what I continue to say, and the conversation I had with Mr. Schertz, which he insisted he has a right to do it – absolutely. You, he, they, what I said was … have a right to do what they did,” Madigan said. “The good developers, the developers that work with the town, notify the town what they’re doing, ask for feedback and input, and then proceed with doing it. We don’t wake up the next day and suddenly half the Island’s been cleared out in that development.”

Palumbo said all the trees haven’t been cleared, and cited examples of care taken to preserve certain species of trees designated as valuable or that have been requested to be saved. He said leftover brush and debris will be cleared. “We didn’t take out all the trees. We took out the trees in the area where the roadways are going to be and where the houses are going to be.”

Looking back at previous plans for Southpointe, a group of Canadian investors in the late 1990s had planned for retail outlets, offices and high-density residential units on the entire site, with 1 million square-feet of commercial space. The development proposed in 1998 was never built.

When the latest iteration of the Southpointe plan was introduced at a public hearing in 2019, most of the residents who spoke were against the development, citing concerns over increased traffic, reduced green space and excess burden on town infrastructure.

The project has long been controversial because it goes through wetlands and woodlands, but the plan has evolved to the point where the current developers now say 99% of the wetlands would be preserved as is, and open space would comprise 89% of the development.

Council member Tom Digati made a motion to accept the trail, subject to the Conservation Advisory Board’s considerations, including eight criteria that were in the advisory board’s review. The motion was seconded by council member Pete Marston and passed unanimously.