News and excitement continues to build as the 63rd edition of the Niagara County Peach Festival nears.

Lost last year to the COVID-19 pandemic, event organizers the Kiwanis Club of Lewiston were upbeat this week as they reviewed the still-developing plans for the 2021 festival, set to open Thursday, Sept. 9, and continue to Sunday, Sept. 12, at Academy Park in the Village of Lewiston.

As revealed earlier, many of the Peach Festival favorites are scheduled to return this year. Among them: the Friday evening cheerleading events, the Saturday morning parade on Center Street, the Peach Fuzz and Peach Blossom events for the younger set on Sunday, and the Peach Queen pageant throughout the weekend. And interspersed, visitors can expect many of those familiar sights – the home-grown Niagara County peaches to be had in various forms, the fabulous midway, the fun and games, dozens of vendors of all kinds and, of course, servings of those delicious shortcakes.

It all gets underway in less than a month.

Topping the news, Kiwanis organizers said festival attendees can look forward to a new layout at Academy Park. The familiar spectator stands and staging area have changed. New features include a relocated Alphonso DiMino Memorial Bandshell to the southwest corner of Academy Park at the corner of Cayuga Street and Portage Road.

The park itself has seen a number of new configurations.

“We’re just about 90% full on the field,” remarked Kiwanis member Ric Flores as to the new vendor placements planned on the western side of the park. Here, club planners mapped out new aisles of vendors to be situated in a center area just east of the big tent on the park’s west side, with the Amusements of America Midway expected to be placed in the more open areas to the east facing the South Ninth Street side of the park.

Speaking of the bandshell, festival Chairman Dean Beltrano said the staging area will be larger. There will be seating with upward of 200 temporary chairs in an enclosed area, plus sections for spectator gathering on the adjacent lawn areas. He said the stage area, as well as areas behind the bandshell, have been better planned to accommodate event participants and the many Kiwanis functions throughout the weekend.

The festival itself opens at 5 p.m. Thursday. Planned activities that evening include meet and greets with sports mascots from the Bills, Sabres and the University at Buffalo, along with WNY Super Heroes figures.

The annual Peach Taste-off, with sponsorship will be held on stage from 5:30-6:30 p.m., followed by the celebrity shortcake-eating contest from 6:30-7 p.m.

“This year, there will be three divisions for entries, which include food enthusiast, culinary student and a new children’s category,” the Kiwanis Club announced. “Winners will receive gift certificates to Savor Restaurant in the Niagara Falls Culinary Institute, along with other great prizes.”

Entries are now being accepted. Original recipes must include fresh peaches and be prepared from scratch. The use of premade products may result in disqualification. Recipes must include all ingredients and state how many portions can be served. Deadline for entries is Thursday, Aug. 26. 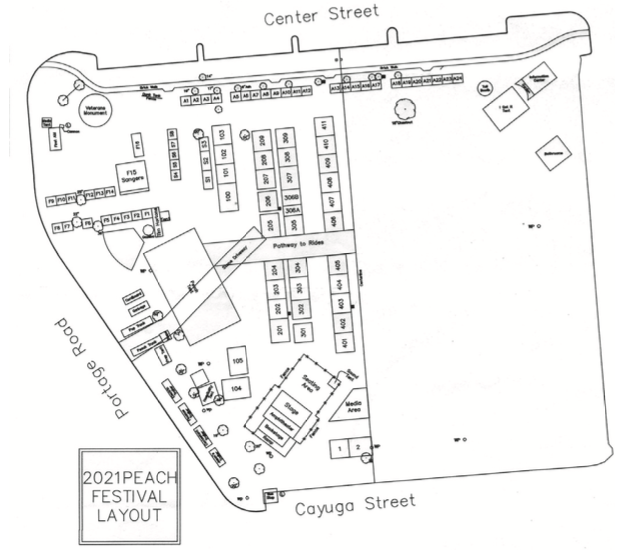 A look at the new configured Peach festival layout at Academy Park, with festival tents and vendors on the left the Amusements of American midway planned on the right. (Art courtesy of Lewiston Kiwanis Club)

Capping off the Thursday events will be a performance of Nerds Gone Wild on stage from 8-10 p.m., with some cool ’80s-themed contests expected.

Lewiston Kiwanis said the popular advance ride tickets are now on sale. The presale ticket price of $20 is 50% off the tickets purchased on the field at the festival.

Tickets are now on sale in both Niagara County and Erie County at the following locations:

In other news, the Friday night cheerleading program is expected to feature a large number of participants from area schools and youth sports organizations. So is the Saturday morning parade on Center Street with its large contingent of marchers, dancers, government officials, political candidates, police and fire companies and more than a dozen marching bands.

At this writing, the club said it expects approximately 10 Peach Festival contestants. Applications remain available for a number of other festival happenings, including the Peach Fuzz and Blossom contests, the recipe and tasting events, the cheerleading competition and the parade.

The popular free parking at Artpark/shuttle arrangement with Grey Line shuttles is again in place.

Kiwanis said it has worked diligently and continues to do so with regard to any COVID-19-related contingencies.

“It’s going to be a big event,” Peach Festival Advisory Chairman Jerry Wolfgang said of expectations for this year.