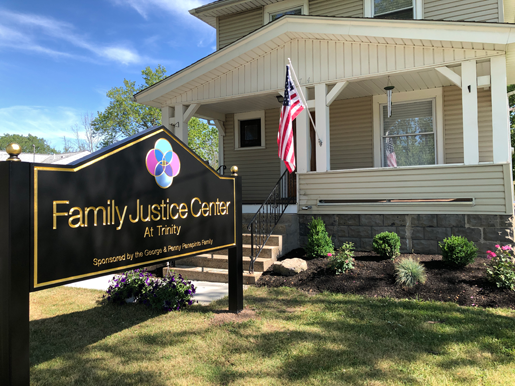 Moments before the ribbon was cut to open the Family Justice Center’s satellite location on Grand Island on Saturday morning, June 12, Mary Murphy, its president and CEO, had a special announcement to make in front of the house on the Trinity United Methodist Church campus.

She told the gathering she had been working closely with James and Giorgio Panepinto to determine the best way to use a generous donation from their parents, George and Penny Panepinto. As George and Penny stood with their adult daughters, Joan, Susan, Teresa, Annette and Mary Catherine, the boys made their way to a covered sign in front of the house. On Murphy’s que, the cover was removed to reveal a large, beautiful sign that read: “The Family Justice Center at Trinity. Sponsored by the George & Penny Panepinto Family.”

“I feel speechless with gratitude,” Murphy said after opening the FJC’s fourth location.

“When I say the FJC’s role when these satellite locations are built is to duck and let everyone in the community run with it and drive the initiative to fruition, it’s true and they did it beyond our expectations here on Grand Island,” she said. “This satellite is gorgeous, and it is a testament to everyone who understood that our guests deserve a beautiful, amazing safe haven when they walk through the doors full of fear; and they have it here.

“George Panepinto, a Grand Island resident and developer, who led the team to renovate this house, dropped to us from heaven. We call him our Angel George. He made this happen with the support from the entire community and we are so grateful for him and everyone who helped him.”

Panepinto, a deeply spiritual philanthropist who quietly helps others, was especially passionate about this project after hearing the testimony of real-life stories of domestic violence by Island residents Karen Panzarella-Brodie and Laura Mason.

Once the house at Trinity was found after years of searching for the ideal location, Panepinto contacted a number of vendors he works with to complete the total renovation on time and under budget.

“I thank God for me being here and able to help,” he quietly said after being completely surprised by the sign. “If I am an angel, Mary Murphy is an archangel. I especially thank Karen and Laura for their input into what this house should look like and their willingness to share their experience with domestic violence and exhibit hope to help others.”

He recognized and thanked his wife for her assistance before acknowledging his children and thanking them for their generosity.

As Murphy and five others prepared to cut the ribbon to open Grand Island’s Family Justice Center, the FJC CEO looked into the crowd and exclaimed, “We are here because you are here.”

Standing off to the side in solitude was Mason, whose personal struggles for years with domestic violence in her hometown were featured in a recent front-page Island Dispatch story. As she observed guests walking into the home for a tour, a sense of relief seemed to overtake her.

“It makes all those years of abuse worth it,” she said. “We now hope those suffering will not be ashamed but rather will come visit us here. We hope it will give them hope and a new life. We want everyone to have happiness, because we all deserve it.”

The FJC opening began an hour earlier inside Trinity with a celebration that featured prayers and Bible verses from the Rev. Kevin Slough, musical arrangements and comments.

After Pastor Slough gave a prayer of welcome, Murphy outlined the FJC’s long Grand Island journey, praising several “original angels who refused to give up on this journey.” She concluded her remarks by saying, “I offer my gratitude and love to everyone here.”

Soloist Kelly Gast of Grand Island, accompanied by Dennis Overholt, performed “Clean,” which she explained is the story of a domestic violence victim.

Panzarella-Brodie, an FJC board member and co-chair of the Grand Island project with Mason, presented remarks about “A Community of Support.”

She retold her story of abuse and how she met Mason at the Buffalo Launch Club and soon found they both had domestic violence in their past. A bond between the two was formed. She spoke of renovating the house and the need for it on Grand Island before adding, “The team of FJS advocates did amazing work during the pandemic when the calls were plentiful because victims were isolated for so long and the abuse became so great.”

“We now have a beacon of hope on Grand Island. We hope this satellite removes the barriers for victims of domestic violence so they can achieve the hope of positive human connections,” she said.

Town Supervisor John Whitney, who attended the dedication and ribbon cutting, said, “The clients of the Family Justice Center are fighting hate and they now will receive love here – and the more love you get, the more you give. This facility is beautiful; and my only prayer is they go out of business.”

The Family Justice Center’s main office is in downtown Buffalo. It also has satellite locations in Amherst and Orchard Park.