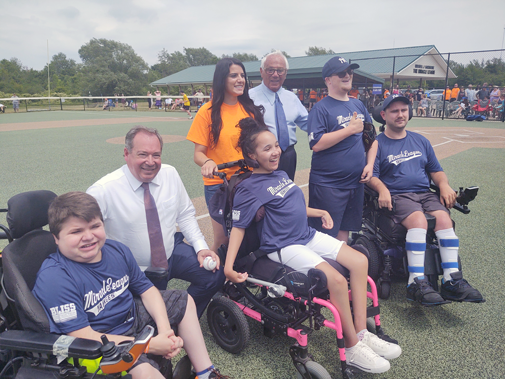 Overcoming is name of the game for Miracle League

Vinny Golca, who has been involved with the Miracle League of WNY as a player, coach and now a Buddy since 2014, remembers his biggest thrill as a player seven years ago.

“I hit a home run over that fence,” he said as a huge smile crossed his face. “I watched it go over and then I ran around the bases. I was very happy about that.”

Golca, 30, who has ADHD and low muscle tone, is one of the lucky Miracle League participants because he began playing baseball in little league.

“This is great for these kids because many of them have no other opportunity to play like most kids. Here we have the field and the playground, and they all have fun,” he said while standing in the dugout on the third base side among smiling and cheering participants, many of whom are in wheelchairs.

Standing to his left along the fence and watching the first game of the 10th season in Grand Island’s Veteran’s Park – on the field he generously donated to – was Russell J. Salvatore, a prominent philanthropist and founder of Russell’s Steaks Chops & More and Salvatore’s Grand Hotel. He was with Mark Jerge, his general manager and president of the Russell J. Salvatore Foundation; and Charlie Ciotta, who sang the national anthem during the opening day festivities.

“I feel like a kid myself watching them,” Salvatore said after throwing out the first pitch with Tom Fogarty of the Fuccillo Auto Group of Grand Island and Erie County Legislator Kevin Hardwick. “I’m happy I was able to help out in a small way; and I will continue to support the Miracle League because these are terrific children, and I will stand behind them 100%.” 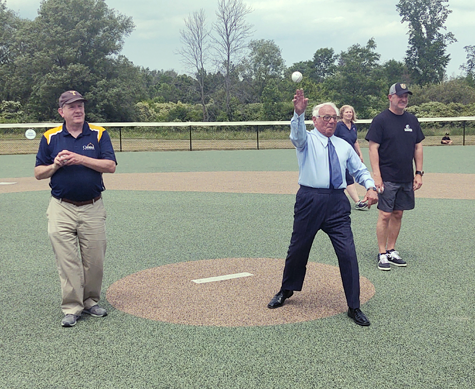 Providing opportunities for children and young adults with disabilities to play baseball, regardless of their disabilities, provide community support and construct special facilities is the Miracle League’s mission. That was all on display last Sunday afternoon – even after a challenging year with the COVID-19 pandemic and vandalism to the park last month.

“Anniversaries are great, but what is greater is seeing all these kids beat these challenges to be out here with their friends,” said Scott McManigle, executive director. “Getting past COVID to open this season is more important than the 10th anniversary recognition.”

Don Zimmer, president of the Miracle League’s board of directors, smiled as he looked through the crowd and saw so many adults and youth wearing orange Buddy T-shirts, signifying those who will assist the players throughout the day.

“In addition to them assisting our kids and young adults play baseball or enjoy themselves in the playground, we are spreading education and awareness about we do throughout the community,” he explained. “The biggest benefit to our participants is to be out here doing what other kids can do without thinking. This Miracle League facility gives our participants an opportunity to do it unlike any other place in Western New York.

“It is just great to see and be a part of and the participants have so much fun when they are here. When they smile, it makes all of us volunteers smile.”

When news broke in early May that the special Miracle League playground was vandalized, Fogarty, an Island resident and general manager of the Fuccillo Auto Group, called Billy Fuccillo Jr. and explained what happened.

“The news of the vandalism hit me hard and Billy agreed we should get involved, so we wrote a check and presented it to Scott (McManigle) and now I am involved here,” Fogarty said.

The Buffalo Sabres Alumni was one of the first contributors to help construct the facility 10 years ago through former NHL great Larry Playfair, a Grand Island resident. The Sabres Foundation is also involved as a financial supporter. Rich Jureller, its president, said The Miracle League annually is the top seller of 50/50 tickets during Sabres games.

‘This is an amazing program because these kids could not play anywhere else and now they are on their own field with the stands filled with family and friends cheering them on,” said Jureller, whose daughter, Samantha, is a Miracle League Buddy.

Former Buffalo Bills player Marlon Kerner is a friend of McManigle and, after hearing so much about the Miracle League, he joined its board of directors.

“I love what they do here and, as a former athlete, to see what these kids and young adults are able to accomplish, it’s so rewarding,” he said.

During the opening ceremonies, a baseball plaque with the name Michael “Moe” Dinsmore was placed on the Miracle League Hall of Fame wall on the outfield fence by his mother, Judy, a long-time league volunteer.

For more information about the program, to donate or become a Buddy, visit www.miracleleaguewny.org or The Miracle League WNY Facebook page. 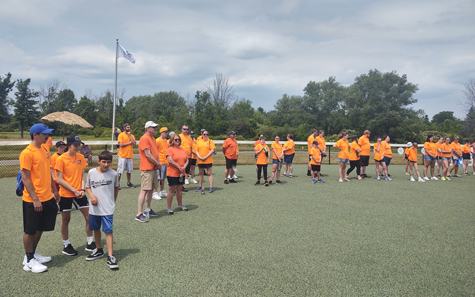 Some of the many Miracle League Buddies during the opening-day ceremonies.