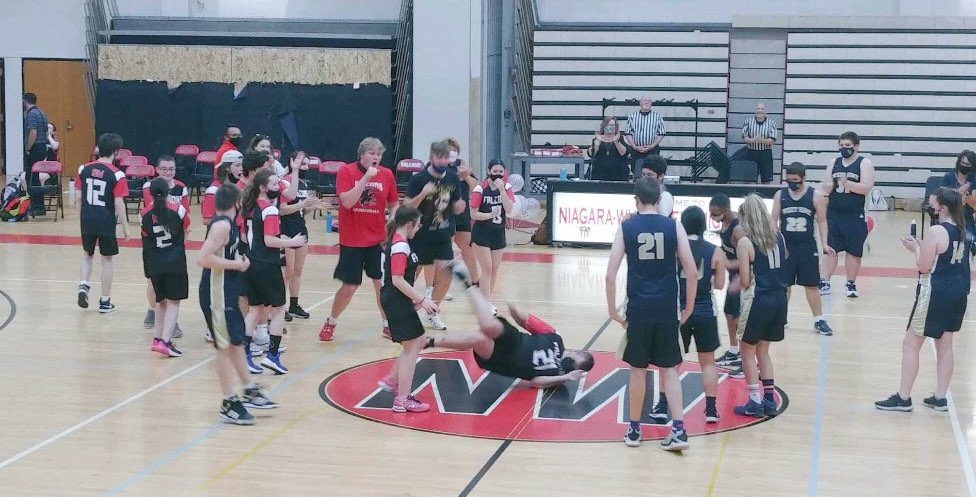 Unified basketball lives up to its name, providing an opportunity for all athletes to get on the court and have fun. (Photo by Toni Snyder)

Program gives all a chance to play

The game of basketball can bring countless memories to all who have played. Some remember the first time they made their first basket, some remember game-winning shots, and some may just remember being part of a team.

For some, though, they haven’t been as fortunate to feel the experience of playing in front of fans or being on a team … until recently.

In the past few years, school districts around the state have begun an initiative to include all students in sport. Schools around the Niagara Frontier have begun unified sports programs, such as basketball and bowling, which gives students with intellectual disabilities the opportunity to compete in competition. This spring, Niagara Wheatfield High School kicked off its first year of unified basketball.

With unified sports interest growing in the region, the faculty and administration at the school decided it was time to look into putting together a team. Talks actually began last school year, before COVID-19 halted the remaining months of school.

“It was first brought to my attention by our athletic director and athletic director’s secretary, Matt McKenna and Jamie Beiter, brought it up to me and kind of explained what the program was,” Niagara-Wheatfield unified basketball coach Anthony Cappuccilli said. “I was fascinated by it; I was really excited about it. So, they reached out to me to gauge my interest and I was 100% on board.”

Cappuccilli, in addition to coach Nicholas Azzarella, started attending informational sessions about the program and began to get kids involved at school. Despite worries about COVID-19 restrictions, the group was able to get the season in. Cappuccilli said he and Azzarella continued to learn as the season went along and it made for an “awesome” season.

The New York State Public High School Athletic Association, in partnership with Special Olympics New York, created Project Unify, which combines athletes with intellectual disabilities and athletes without disabilities. Together, the group participates to “ensure that every player is given an opportunity to contribute to the success of his or her team through their unique skills. Inclusive activity is among the most conducive ways to break down stereotypes and foster relationships,” the NYSPHSAA said.

Additionally, the website said, unified sports “provides students with and without intellectual disabilities opportunities to take on leadership roles in promoting Project Unify activities in their schools and in their communities,” as well as providing “opportunities for all students to participate in school-wide campaigns and activities such as Fans in the Stands, Pledge and Plunge, and the R-word Campaign.”

The NYSPHSAA can provide all the sentences and definitions it wants, but in the end, unified sports are much more than playing a sport. The unified programs provide a lifetime of memories to everyone involved in just a couple hours of play per day. Students with intellectual disabilities who may have never gotten a chance to play in front of a crowd receive the joy of getting cheered on by their friends, family, faculty and students.

Students without disabilities also receive cherishing moments of helping a student succeed and to see the joys and smiles on students faces whom they may never have interacted with before.

The excitement extends to the stands, as many family members share tears of joy, smiles and cheers watching their son or daughter play, and have a great time doing so.

Cappuccilli, who also coaches the modified basketball team, said the atmosphere has been unmatched at the games, and at every one you leave with a smile on your face and joy in your heart.

“The excitement is so high. The kids are just through the roof excited to be playing these games,” he said. “Even though spectators were limited this year, everyone that gets to go is 100% engaged and the kids are having a blast.”

Cappuccilli noted that, at halftime of most games, both teams would head to the court for dance-offs and freestyle dancing.

“You can’t help but to leave in a good mood, because of how much excitement you got to be a part of at the game,” he said. “Win or lose, you have a good time. … It’s a great thing to be a part of – player, fan, coach or student. It’s hard not to smile and just enjoy what’s going on around you.”

As memorable of a time it is for students with intellectual disabilities, it’s also an unforgettable time for the student volunteers who assist with the team. Cappuccilli said members from the varsity basketball team came out to help in addition to 10-plus students. These volunteers come to every practice and game and assist the students with intellectual disabilities in sport. During games, two of the student volunteers are on the court during games to assist in action, which Cappuccilli called “team buddies.”

“We had an overwhelming amount of students who wanted to do. It was really fantastic. They worked so well with our athletes,” he said. “I think it’s safe to say the student volunteers get just as much out of the experience as the athletes do. They formed relationships and bonds with the athletes. I know a few of them have gotten together outside of school and played video games; they’ve exchanged phone numbers and are staying in touch now that the season is over. I think it’s totally opened their eyes to a part of their school that they didn’t often get to interact with or get to know on a personal level.

“And I know the students with intellectual disabilities made a huge impact on them as well. They formed these really tight-knit bonds that will carry on beyond the basketball season.”

The NYSPHSAA may have some sentences on their website that entail what unified sports is, but Cappuccilli said the initiative opens so many possibilities for all parties involved and everybody gets something out of either playing, volunteering, watching or coaching.

“Unified sports give kids who otherwise haven’t had the opportunity to be involved in school this way, it gives them a chance to be a part of something. It gives them a chance to connect and make friends they wouldn’t otherwise have the opportunity to know. I think it brings people together from all different blocks of life,” Cappuccilli said. “I feel like it’s totally changed the experience the kids get to have at school, both the students with intellectual disabilities and the students who are there to help.

“Unified has been one of my favorite things I’ve been able to be a part of, because it really shows you the good in people. I think it shows you that, although we live in a world right now where there’s a lot of negative and ugly, it shows the good in humans. And no matter how different you could be with the person standing next to you, everyone brings something to the table; and everyone can come together and be a part of something that is special and is a light for most people.”

The Niagara-Wheatfield unified basketball team’s season may be over, but the team will be back in action next school year, with (hopefully) no attendance restrictions, so everyone can see what unified is all about.