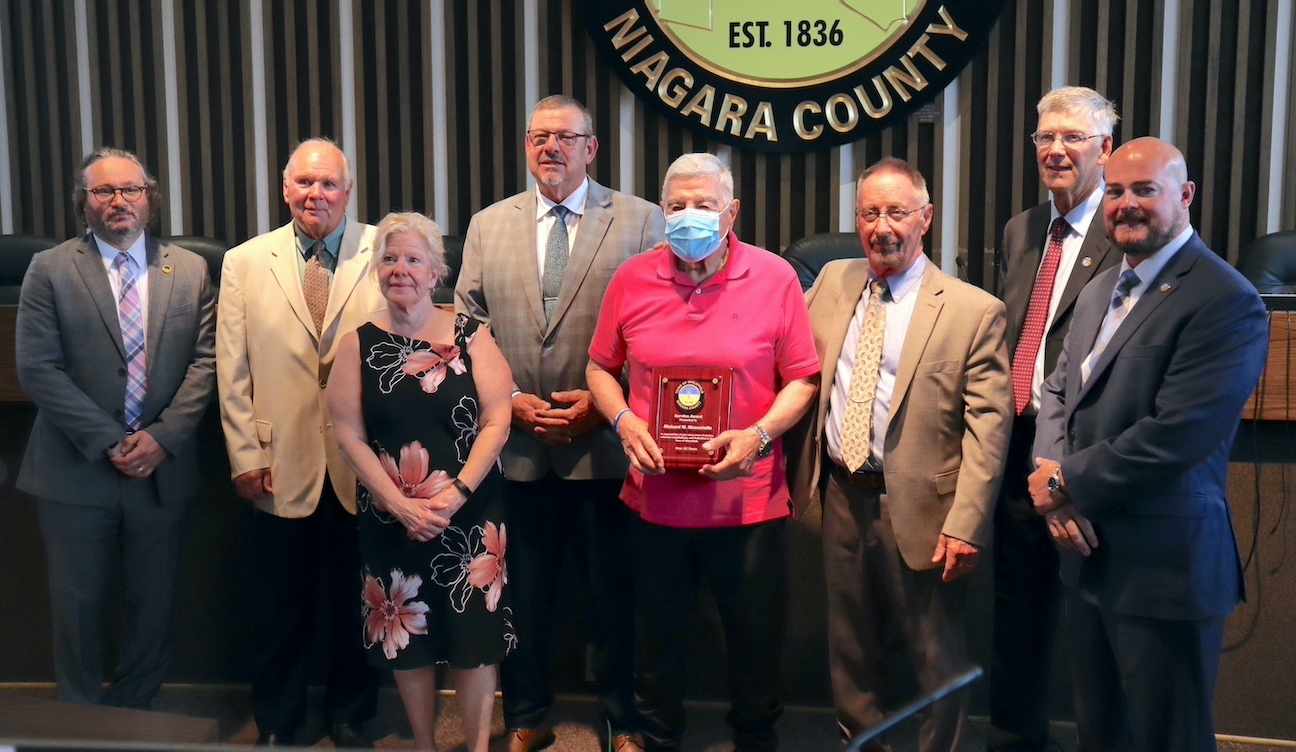 The Wheatfield Town Board honored Richard Muscatello, center, this week.

On Monday, the Wheatfield Town Board issued a formal proclamation to Richard Muscatello, a beloved and admired figure, for his many years of work and dedicated service. The board presented him with a plaque, a memorial bench (to be installed at the new Veterans Monument site behind Town Hall) and even a cake.

“Back in 2019, we actually had a proclamation (for Muscatello) that was specific to the volunteer service and leadership specific to the Comprehensive Master Plan Task Force,” Councilman Curt Doktor said. “Very influential work, but it did not encompass the broader body of work that Col. Muscatello has been involved with, and in many cases has led. Today is about thanking you for everything you have done for the Town of Wheatfield. That includes the appointed positions, the committees, the trailblazing; pushing the envelope and encouraging others to get involved. All of that in the name of making the Town of Wheatfield a better place.”

Muscatello, a retired Air Force colonel (base commander), served the town for over 30 years, first on a volunteer basis serving on various committees related to town activities and local laws. He went on to serve for years on the town Planning Board, including an extended tenure as chairman. He also served on the Zoning Board, where he was chair until last year.

During the ceremony, many who worked with him over the years spoke about his accomplishments.

“I found out later that he was the one who helped create and update many of the existing (town) codes and their checklists,” Niagara County Planning Board Chairman Walter Garrow said.

He went on to discuss lessons he took from Muscatello during their time together working for the town.

“His mentoring guided me ... to avoid personal opinions, stick to facts and current applications and existing codes,” Garrow said. “We were to keep from any code impacting precedence and to ensure each decision was uniquely documented. … Through all this, I also learned of his deep human values. Richard has devoted sets of beliefs on faith, religion and respect for life. He loves this community and has always done what he could to protect it.”

Councilman Larry Helwig also explained how Muscatello spearheaded the revisement of the town’s payroll system in the early 2000s. While firms from New York City priced the work at $40,000-$50,000, Muscatello instead opted to facilitate the changes himself – a massive, months-long undertaking that resulted in financial savings for the town.

“Richard has always given 100%. He was always a straight shooter and, when he went after a project, whatever it may be, he was always extremely focused and always did the right thing,” MacSwan said. “I think it's one of his special traits that he would tackle a job, whether it would be a local law or payroll system, that he did what was right for the town. ... I think people appreciate him for his honesty and his direct path to getting something done. He always gave 100%, and whatever he was working on it would be shot for perfection.” 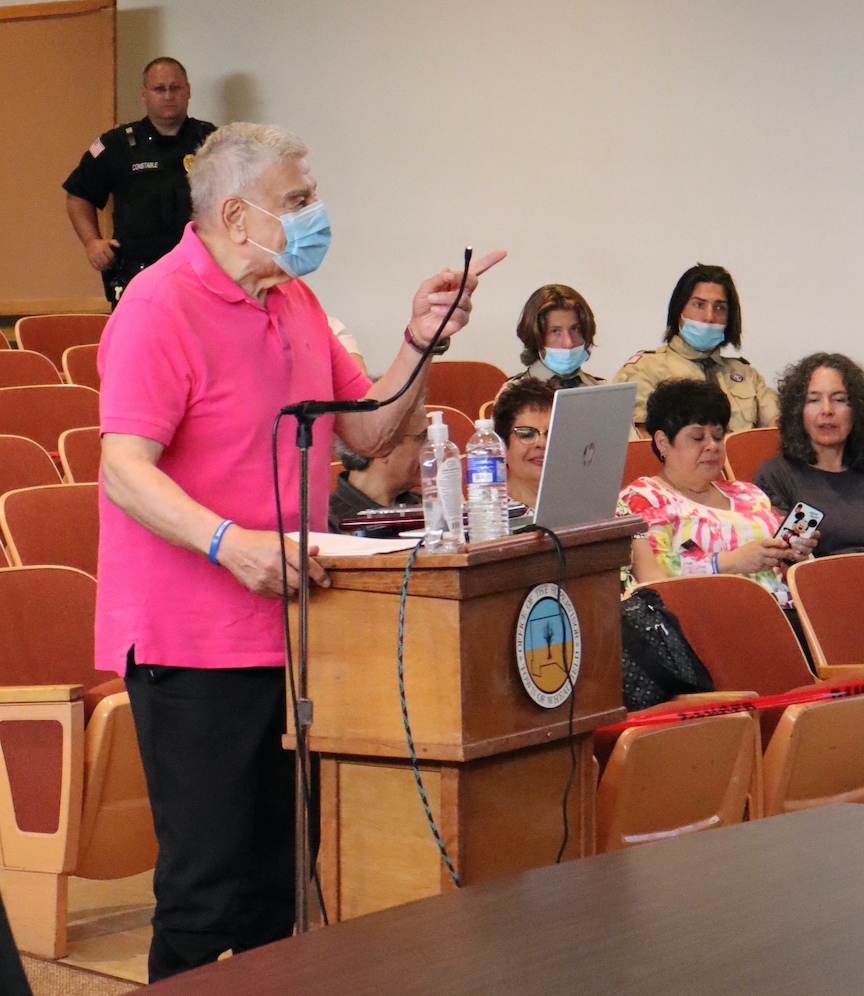 Muscatello thanked his family, many who were in attendance, whom he called “unofficial members” of the Planning Board.

“At 5:30 every night, including Saturdays, we would have dinner and then I would go upstairs to work until 11,” he said. “I didn't watch any of the programs they watched. We didn’t do a lot of travelling or a lot of extensive socializing, family-wise, because I devoted all that extra time to the Town of Wheatfield. So thank you.”

He also spoke about the numerous names that he worked with and helped guide him along his lauded tenure. In regard to the Planning Board members at the time he joined, Muscatello said, “Those gentlemen showed me that planning boards are not a place to go to be told you can’t do something; they’re a place to go to help do something. And I’ve tried to pass that on to others.”

After his time at the podium, Muscatello received a long standing ovation from the board and audience members.

The board authorized Wendel, the town’s engineering firm, to conduct a coordinated review process regarding proposed changes to the laws regarding solar energy systems. It subsequently scheduled a public hearing for 6:45 p.m. July 12 at Town Hall, where proposed changes will be discussed. The town previously issued a six-month moratorium period to halt further proposed solar energy facilities while it reviewed town code. That period is set to expire in August.

•Elsewhere at the meeting, following a May 17 public hearing on the issue, the Town Board approved amendments to the town code, Chapter 169 (subdivision of land). Calling the old law “outdated,” officials said the changes will address concerns regarding dead-end streets, cul-de-sacs and the installation of individual grinder pumps in future subdivisions.

Developers will have to install their own centralized gravity collection system and have a centralized pump station. Town officials said they have been dealing with issues related to grinder pumps for years.

New subdivisions can also no longer feature dead-ends, and those that will feature cul-de-sacs will be “side bulged” as opposed to the traditional symmetrical circular shape. This is an effort to reduce resources and effort used to plow and repave these areas, while also making it easier for school buses and emergency vehicles to cross.

•A separate item from the Highway Department will see the removal of the flashing red light at the intersection of Plaza Drive and Sawyer Drive, leaving the intersection a four-way stop with signs.