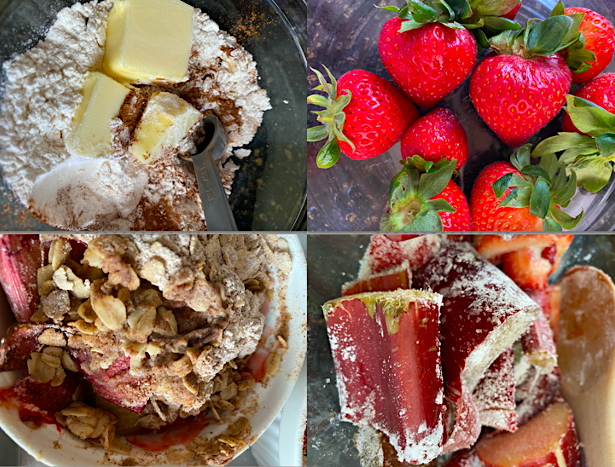 Vegetable or fruit, let's cook with rhubarb this spring

The smell of lilacs in the backyard. Muddy knees and properly exhausted from playing outside, only to be rewarded with a freshly baked rhubarb dessert. This was spring at my grandparent's house in Niagara County. While my grandmother is now 97 years old, and she isn’t baking like she used to, the younger generation is taking over in the kitchen.

From April to June in Western New York, rhubarb is plentiful at the grocery store and farmers markets. Though in limited supply right now, Wegmans is currently selling it; and the Lewiston Artisan Farmers Market (9 a.m. to 1 p.m. Saturdays at Academy Park) promises to have one vendor offering rhubarb.

Technically a vegetable, rhubarb is legally considered a fruit. In 1947, New York declared it so because of how it is commonly prepared. Usually a bright pink hue, rhubarb stalks can also be light pink or pale green. The color is not an indication of ripeness. The stalks are the only edible part of the plant, and sellers usually remove the leaves prior, especially since they are poisonous if consumed.

While these tough stalks look daunting, cooking with them is really a cinch. Not much sugar is needed to sweeten up their tartness, and adding strawberries to the mix also helps.

Here is one recipe where rhubarb is the star and it is sure to be a crowd-pleaser.

1 lb. strawberries, hulled (cut in half or quartered for big pieces)

Juice from half a lemon

*Note: Make sure the rhubarb is sliced thin so that it will cook down during baking

In a large bowl, toss together strawberries, rhubarb, sugar and cornstarch. Evenly distribute mixture into the ramekins, or pour the mixture into a plate or pan. If using ramekins, place them on a baking sheet.

Combine oats, flour, brown sugar and cinnamon in a bowl. Cut cold butter into the mixture until pea-size rounds form or the mixture crumbles. Sprinkle topping over the fruit.

Bake for 35-45 minutes until fruit is bubbling and oat topping is golden brown. Remove from the oven and let cool for 10 minutes. Best served warm with vanilla ice cream.

Store in the refrigerator, covered for up to four days.