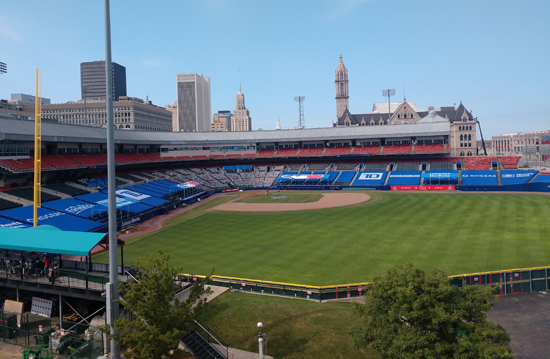 The Toronto Blue Jays 2021 home: Sahlen Field. Cardboard cutouts of fans lined the stands for Jays' games last summer. This year, fans will be allowed in the park.

Tickets go on sale to the general public on Thursday

The Toronto Blue Jays confirmed Wednesday what the Island Dispatch speculated in its April 23 Island-wide issue: Major League Baseball games will be played in downtown Buffalo’s Sahlen Field for the second straight year.

This year, however, fans will be allowed to attend an MLB game – for the first time in the Queen City since 1915.

The Blue Jays and their Triple-A affiliate Buffalo Bisons worked with Buffalo, Erie County and state officials before announcing capacity would be approximately 4,300 (24% of the ballpark). New York recently extended capacity to 33% for outdoor venues – or around 6,000 seats inside Sahlen Field – with 6-feet distancing required between pods of two or four seats sold.

With Sahlen Field’s current footprint, capacity could not be increased.

Two hours after the Jays/Bisons’ announcement, Gov. Andrew Cuomo said vaccinated fans could sit in sections at full capacity beginning May 19, which means the Jays can sell Sahlen Field’s 16,600 seats if every fan is vaccinated.

“That was just announced very recently by the governor and we talked a little bit about it with the Blue Jays today,” Rich Baseball Operations President Mike Buczkowski said during a virtual media call late Wednesday afternoon. “It’s something they’re going to evaluate and figure out what’s going to be best.”

"We ask everyone to wear masks, but you can attend the ballgame like you attended a ballgame two years ago," Cuomo said Wednesday. “It is an added advantage to get vaccinated. This is good for baseball fans – and good for public health.”

Prior to the Jays playing here last summer, when they were 17-9 and earned a spot in the playoffs, the last MLB game in Buffalo was in 1915, with the Buffalo Blues of the Federal League.

A year later, the Jays are back and, like Blues’ games at Federal League Park at Northland and Lonsdale on Buffalo’s East Side, fans will be in the stands.

In recent years, the Blue Jays transitioned to a “dynamic” pricing model with tickets for games against prime opponents and weekend dates costing more. That would likely include the series against the New York Yankees, June 15-17, with 7:07 p.m. starts.

Tickets for those three June homestands will go on sale to the general public at 10 a.m. Thursday, May 13, at www.bluejays.com/tickets. As per MLB COVID-19 protocols, all tickets must be purchased and accessed through mobile devices via the MLB Ballpark app. Tickets will be sold in pods of two or four, with a four-ticket limit per customer per game.

Bison season-ticketholders will be offered a presale opportunity to purchase tickets at 10 a.m. May 12 for the first three series. Tickets will not be sold or held at will call at Sahlen Field.

Tickets for an extended homestand from June 24-July 4 will go on sale to the general public at 10 a.m. June 3, following the same protocol. The homestand will feature games against Baltimore, Seattle and Tampa Bay (the defending American League champion). Subsequent homestand on-sale dates will be announced later.

It was originally announced fans planning to attend the games must be vaccinated or show proof of a negative COVID-19 tests – either PCR within 72 hours of the game or rapid antigen within six hours – and that would suffice for fans ages 3 and older who are not fully vaccinated. However, Cuomo said testing requirements are being dropped. Symptom screening and temperature checks will be required before entry. Masks will be required at all times for anyone age 2 and over except when eating or drinking at a ticketed seat.

The Jays are playing their 2021 American League East home games in April and May at their spring training facility in Dunedin, Florida. If they were to play the remainder of the regular-season schedule in Buffalo, with the final home game Oct. 3, it would total 59 home games in Sahlen Field.

Throughout this entire process, Jays officials are closing monitoring the situation with the reopening of the Canadian border and approval of Canadian health officials to allow athletes to enter and leave the country because of the COVID-19 pandemic. Once they receive the green light to return home, the Blue Jays will leave Buffalo and the Triple-A Bisons will return from their temporary “home” in Trenton, New Jersey.

“The Blue Jays returning to Sahlen Field to once again temporarily play their home games is a testament to the great working relationship the Bisons organization has with our Major League parent club,” Buczkowski said. “The only thing lacking from a successful MLB summer at Sahlen Field in 2020 was the ability to share that experience with our great fans. I know Buffalo is ready to get back to the ballpark and give the Blue Jays a ‘home-away-from-home’ field advantage that will propel them towards another postseason run.”

The Blue Jays and Bisons have made significant upgrades to Sahlen Field since last season.

The bullpens have been moved off the field and behind the outfield walls, lighting has been improved, new batting cages and a weight room have been built, and a new Jays/Bisons clubhouse was constructed. This week, the entire outfield turf was removed and will be replaced.

For inquiries regarding Blue Jays ticketing or updated ballpark policies for attendance, fans can visit www.BlueJays.com/tickets. 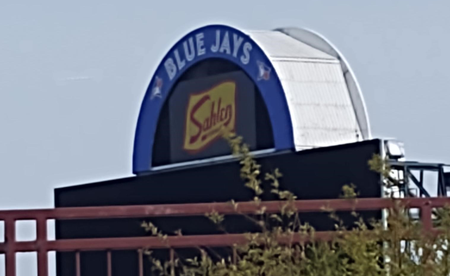 The banner on top of The Big Board in the outfield says it all: Blue Jays