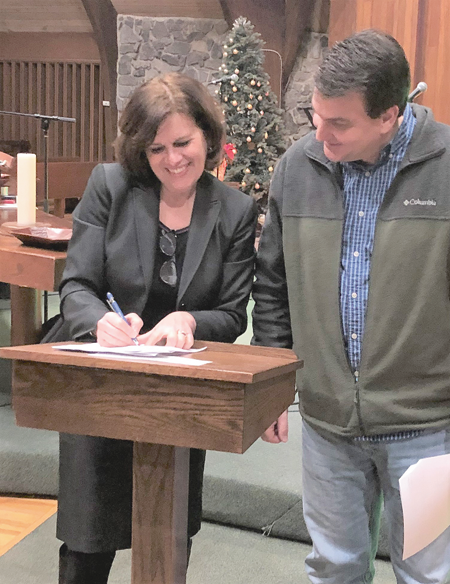 Laura Mason told her heart-wrenching story of the domestic violence she endured for years while living on Grand Island in last week’s first part of this series on the upcoming opening of a Family Justice Center satellite location on the Trinity Church United Methodist Church campus on Whitehaven Road. A ceremony will begin at 10 a.m. Saturday, June 12, inside the church before moving outdoors to cut the ribbon at the church’s parsonage for FJC’s third satellite.

Mary Travers Murphy, president and CEO of the Family Justice Center for the past 12 years, says domestic violence is a “public health crisis” in Erie County. She says calls to the FJC hotline during this COVID-19 pandemic have reached record numbers. The operation has been working remotely, but she says it has not affected the services it provides to victims of domestic violence. She encourages victims of abuse (or if someone knows of a victim) to call the FJC hotline, 716-558-SAFE (7233). For more information, visit www.fjcsafe.org.

Mason, who gave her life to Christ when she was in eighth grade, credits her strong faith and relationships built at Trinity Church for getting her through the nightmare of abuse she endured. Several years after divorcing her abuser, she met John Tommasulo at church and they began dating. He was a boater and belonged to the Buffalo Launch Club. While there in 2016, Mason met Karen J. Panzarella, PT, Ph.D., CHSE; and her husband, Kenneth Brodie II, president of GP-50 and owner of Blue-Ribbon Manufacturing on Grand Island. The two women began talking and soon learned they had a deep, dark secret in common – they were divorced from abusive husbands. Panzarella had lived in East Amherst for 19 years, married to a prominent physician with two young children. A college professor, who now is the director of interprofessional practice and education at D’Youville College in Buffalo, she did not realize until she was divorced that she had been in an abusive relationship.

“My abuse was mostly emotional and controlling, especially the finances, and it continued through a 10-year battle in the court system,” explains Panzarella, an extremely active member of the FJC’s board of directors. “It’s just not fair when you go into court against someone who has control of all the money and says things that make you feel like ‘it’s my fault.’ There were many times I could not pay for an attorney, because I was a single mom trying to raise my children. As a board member of FJC, I am working to improve that court system for our victims.”

Panzarella, who kept her marriage problems to herself – especially in the work environment – had to add topics such as suicide, mental illness and domestic violence to her curriculum in teaching her physical therapy students. A previous professor had invited Murphy to speak about domestic violence, so Panzarella contacted her in 2015 and made arrangements for Murphy to speak.

“I’m sitting in the back row,” Panzarella relates during an interview in her Grand Island home. “Suddenly, I’m saying to myself, ‘She’s talking about me and my life and what I’ve been through with my ex-husband and what I’m still going through with him with the court system.’ I didn’t have an abusive relationship physically, but I just learned I had an emotionally abusive relationship.”

After class, they spoke and, when Murphy heard Panzarella’s story, she invited her for a tour downtown. She soon joined the FJC’s public awareness committee.

Two years later, Panzarella was invited to deliver the keynote address at the FJC’s annual “Voices End Violence” breakfast before 500 guests at the Buffalo Niagara Convention Center. She was invited to join the board after that and, ironically, one of her first tasks was to help the FJC open its second satellite location (Orchard Park was first) in Amherst, where she used to live.

She told this to Mason a few weeks before the breakfast and invited her new friend to be her guest.

Mason, sitting in her home, explains that experience: “I had already been divorced many years and had put everything behind me. Now I find myself at this FJC event and I am listening to someone tell her story and I felt like she was telling my story. It totally hit home with me. I never really considered myself a victim of domestic violence or anything of that nature. I really just felt like I was in a bad marriage. And so now there was this label and I had this overwhelming, emotional reaction, and many mixed emotions. This is my life and, ‘Oh my gosh, I’m a victim.’ ”

Mason and Panzarella bonded after that experience and both agreed an FJC satellite location on Grand Island was needed.

“If the Family Justice Center had existed on Grand Island when I was going through what I experienced, I would not have had that public humiliation in court,” Mason says. “It would have been very private. It has been a very long, arduous process to end up at Trinity, and this has been a very collaborative project with so many individuals involved.”

As Mason got more involved with the FJC, Panzarella and Murphy invited her to give her testimony at the 2018 “Voices End Violence.”

“I was so scared,” recalls Mason, who had invited her parents and children to join her. “I’m taking a deep breath and could barely get the words out as my emotions just start overcoming me. By the grace of God, I was able to tell my story and, when I got through, I felt a huge weight lifted off my shoulders – but I was also concerned how would it be taken.”

She received a loud ovation. It was well-received.

Murphy was all for a satellite on Grand Island, but it was up to the community to find a location and fund the renovations – a task Mason and Panzarella took on. Finding its eventual home was a journey as a number of churches and businesses chose not to host the FJC’s satellite. Along the way, there were some huge successes. A fundraiser at the Buffalo Launch Club raised nearly $30,000; and during a meeting at St. Stephen’s Church, a parishioner, George Panepinto of the Pinto Family of Companies on Grand Island, offered his assistance in managing the renovations once a location was found.

“An angel fell out of the sky at that meeting,” Murphy says of Panepinto’s offer.

Trinity United Methodist Church was one of the first churches they met with, but the congregation had reservations. After several failed attempts to find a home on Grand Island, Trinity had a change in leadership with Kevin Slough, 48, arriving from Rochester as its new pastor. Ironically, the native of Fort Wayne, Indiana, had experienced domestic violence as a youth and saw it first-hand throughout his ministry.

After a meeting with Mason, Tommasulo, Panzarella and Murphy, Slough shocked them all with his simple response: “Why wouldn’t we do this?”

He was quite impressed with Murphy.

“God’s doing something wonderful through this woman,” the pastor says. “Her infectious personality and dedication align perfectly to working with various churches of different denominations. I knew our congregation would be excited helping others to not live in that kind of abusive environment.”

After the pastor’s opening remarks to his congregation, he invited the advocates to discuss what would be located on their campus. The vote was overwhelmingly in favor, with no negative votes cast. The rent was set for $1 annually and Panepinto presented the pastor with a $2 bill for the first two years.

In January 2020, it was announced the satellite would be located in Trinity’s house on Whitehaven, adjacent to its cemetery. It needed a lot of work to make it a comfortable place for victims and their children to visit with trained advocates. Panepinto promised to complete it on time and under budget as he used his many years of experience in the construction business to call upon friends to help renovate the house.

“God’s hands were involved in this project,” the extremely humble Panepinto said during an interview in his Pinto Management and Casella Waste Systems offices on Whitehaven Road.

“You just could not buy an experience like this,” Panepinto says. “It is so important to have this service for domestic violence victims on our Island. What great people we have who worked on this house. Their bill was more than half of what it should have cost. They all believed in the mission.”

When Mason and Panzarella are asked if domestic violence is a problem on Grand Island, they both respond: “We can tell you – in no uncertain terms – it doesn’t matter if we’re speaking in the swankiest country club in East Amherst or Clarence at high noon on a Saturday, in the most impoverished community center in the middle of the East or West Side of Buffalo or on Grand Island or East Aurora: The numbers affected by domestic violence plays out every time we speak and everywhere we go in WNY.”

“Despite not having access to a Family Justice Center in my hometown, I was one of the lucky ones to survive and now I have championed domestic violence on my own,” Mason says during a recent tour of the new satellite location on Grand Island. “In our talks, we encourage everyone to help by changing one community at a time. Today, it’s my community. Tomorrow it could be yours.”

“Help those who live with domestic violence by becoming victors and not victims,” she added.