By Alyssa Garmone and Isabel Merkel

The Niagara University Theatre Department, along with most university theater programs, has been faced with the challenge of maintaining the standards of both curriculum and theatrical performances while also following COVID-19 protocols during the 2020-21 academic year. In a normal, prepandemic year, Niagara University theater would produce eight shows in its season. This year, the department faculty ambitiously took on a nine-show season in order to give students an opportunity to still flourish in their performance-work during a certainly different year.

For many universities, Zoom became the venue that performers and educators alike turned to in order to keep theater alive. In its earliest stages, most people believed the pandemic would not be longer than a few-weeks-long break, clinging to the idea their productions could be back up and running after an extended spring break. What followed launched a new form of experiencing and practicing theater no one could have imagined. Theater programs across the country were turning to Zoom to keep up their performance-based curriculum and provide students with the same standard of education as they would receive in person, consequently opening doors for new discoveries that may not have arisen through any other medium.

For one junior theater student, Tricia Lazatin, there have been many ups and downs throughout the past semester due to state and country regulations. Lazatin recalls the sense of uncertainty instilled in many aspiring and working artists alike at the start of the pandemic.

“For me, one of the hardest things about studying theater in the midst of the pandemic was the fear of the unknown and having to quickly adapt to new ways of producing theater,” she said. “I think it’s fair to say for those of us who were already pursuing this field or thinking about pursuing it, that there was a collective fear and worry within the theater community of whether or not live theater could be done again.”

As the Niagara University Theatre Department looks ahead to its 2021-22 season, Lazatin has the unique responsibility of selecting the annual student-run production for next year. She spoke about the challenges that come along with that job during these uncertain times.

“Throughout this process, there have been many plays I’ve read and enjoyed while researching, but unfortunately had to reject as options to accommodate for restrictions and guidelines of the pandemic,” Lazatin said.

COVID-19 has affected university theater students in more ways than one, though. With graduation approaching quickly for the seniors, the state of the performance industry due to the pandemic leaves graduates wondering what their next step will be. At the start of their college career just three short years ago, no one could have predicted that they would be preparing to enter a field that is currently struggling to survive.

Michael Kelleher, a senior theater-performance major at Niagara University, describes how his post-graduation plans have been personally affected by the pandemic.

“My plans post-graduation have changed in the way that the jobs I was originally interested in are at the moment not yet safe to start back up again,” he said. “My goal postgraduation was to travel with my performance work – hopefully getting employed as a cruise line performer. However, amidst the pandemic, that has shifted and has become a goal further down the line.”

The effects COVID-19 has had on Kelleher’s theater training have not all been setbacks, however. He explained he has learned a lot about sending in online audition videos, describing it as “a growing knowledge of how to market and present myself virtually.” He believes it will give him more of an advantage when trying to break into the industry.

“Online auditioning has been a growing phenomenon in our field and, now that it has become a full-time practice, I feel confident leaving college that I will be able to compete and hold my own when it comes to sharing my work as a performer,” he said.

In addition to the adjustments all theater students have had to make amidst the pandemic, Morgan Hilliker, a junior theater performance major and international student from Ontario, Canada, has been faced with traveling challenges as well.

“With the border being closed, it has been difficult to find ways to get here and get back, and I haven’t been able to go home the whole time I’ve been here,” she said.

Hilliker said that, while she is not used to being away from home for this long, her friends are what keep her motivated as a theater student during such an unprecedented time.

“Being surrounded by my peers who constantly support me and have similar goals and outlooks on life as I do because we motivate each other to keep going,” she said. “When one of us is down, the other is up and can help keep us pushing forward.”

Chair of the NU Theatre Department, Terri Filips Vaughan, shares her experience of adapting theater education for the pandemic. In regard to teaching classes, she has had to adapt in unique ways as a professor of something as physical as dance. Vaughn says she feels this year she has been able to manage guidelines and course quality much better than the spring of 2020.

“When we were thrown online last spring and I was completely unprepared for it. I feel that what I taught was of value, but it was not the quality or content that I would’ve liked to have taught.” 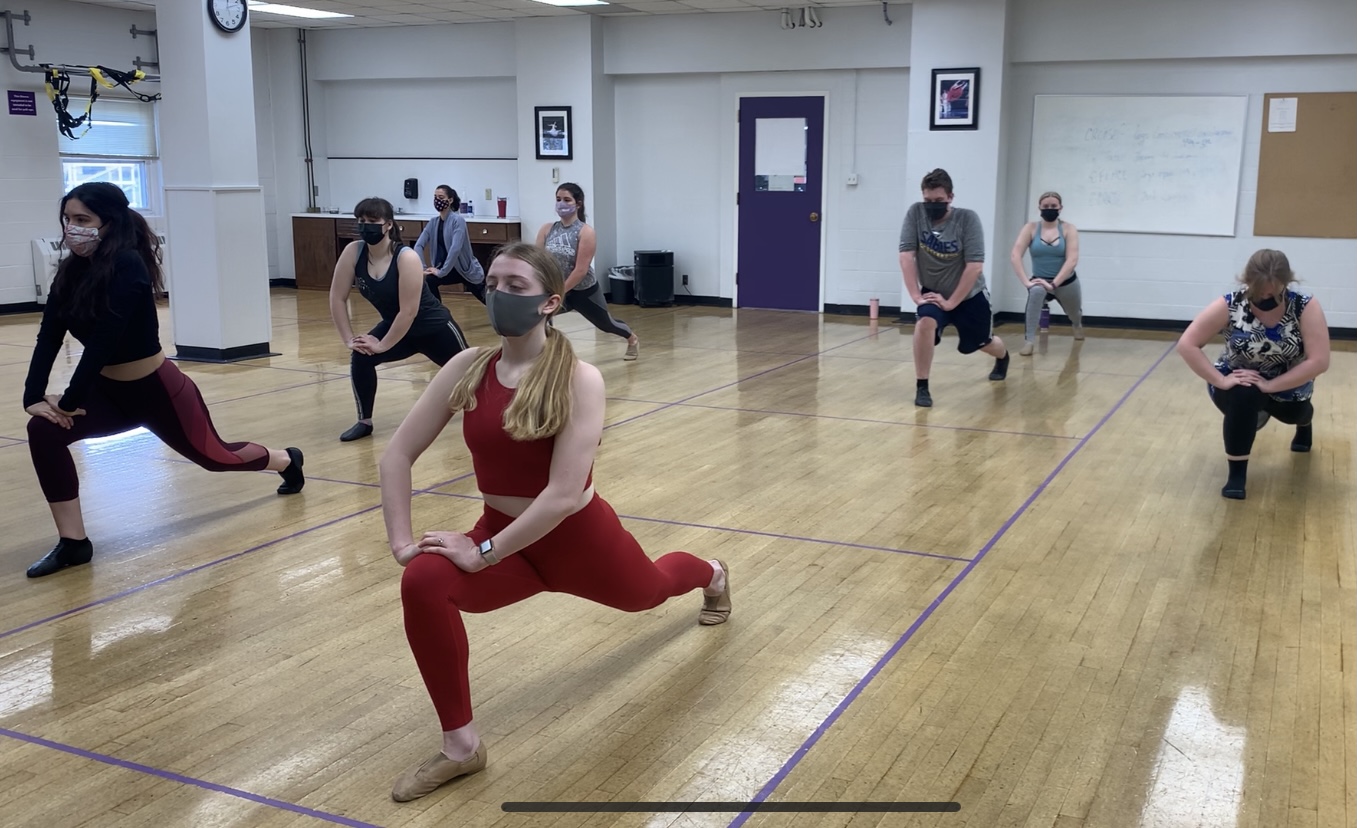 This semester, however, obstacles like not being able to make physical adjustments on students during class, or students being unable to physically do partner work with each other within the ballroom unit, have been big adjustments. Vaughn even had to go so far as to rearrange her course offerings for the next few semesters to accommodate COVID-19 restrictions.

On the more managerial side of things, Vaughan and other theater faculty members have been fighting a long battle of selecting and producing shows throughout the pandemic. As they look forward to hopefully having a limited audience present during performances, the NU theater faculty still have to take rights and streaming agreements into account when making decisions for the upcoming season in order to reach their intended audience through streaming.

Other things like quick changes and intimate physical contact raise concerns for the theater faculty as they hope to have some shows onstage and potentially unmasked. Coupled with streaming service and rights regulations, these concerns limit the field of choices for potential shows immensely.

Adriano Gatto, professor of stage combat courses at NU, emphasizes the importance of safety for both students and faculty as the theater department looks forward to the possibility of streamed live shows with limited audiences. With Gov. Andrew Cuomo’s recent announcement that performing facilities can reopen at 33% capacity, Gatto is excited, but knows there are many things that still need to be taken into consideration.

“The faculty have been working diligently at examining the titles that we can offer that, one, allow a safe environment for the cast, but also for the audience and the crew,” he said. “Normally, we would have a season announced in early March and be confident and good to go, and right now I think we’re maybe 75-80% there. But things change. And the biggest lesson there, too, is adaptability. Being prepared and ready to adapt at a moment's notice.”

Both Vaughan and Gatto lament the hit that collaboration has taken as most shows and classes have shifted to Zoom or other prerecorded singular experiences.

Even so, both professors share similar experiences in how the pandemic has offered a silver-lining for creative minds to take a step back from the work and examine themselves and their processes more closely.

“I think that the creative process has had to find some solutions it might not have normally gone to,” Vaughan shares, referencing the current ongoing production of “Songs for a New World” that is being prerecorded on stage, both socially distanced and masked. She found herself creating choreography that she would not have discovered were she not having to keep the performers distanced.

Similarly, Gatto looks to a brighter future as the department takes what was learned in this past year and applies it to theater how we used to know it, and theater how we know it now.

“One of the overall negatives is not being able to be in the room collaborating as we were before,” he said. “However, this has forced us all to look internally; forced that necessary pause to reexamine how we approach the art – how we communicate – and I think we are going to see this massive transition.”

For more information on how to support the Niagara University Theatre Department, or find out about future productions, visit https://theatre.niagara.edu/.