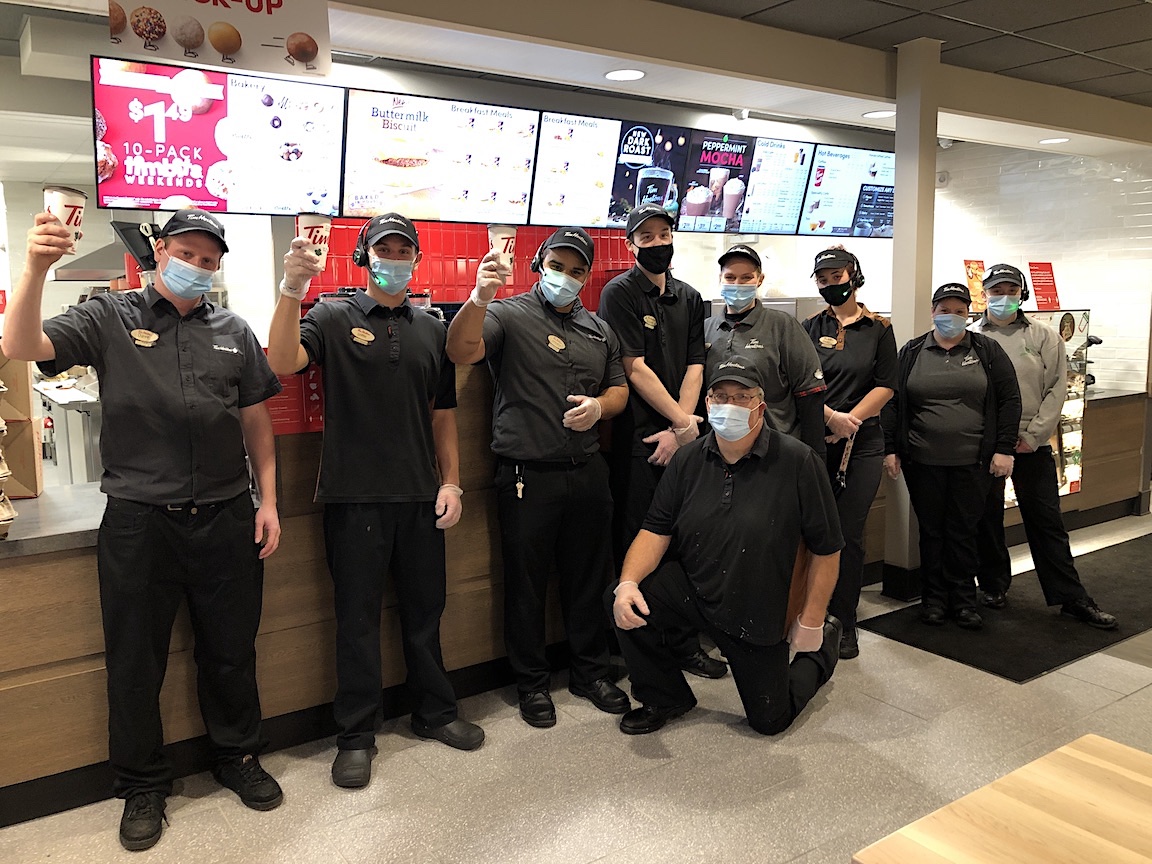 The Tim Hortons team salutes Lewiston on opening day. The cafe and bake shop is open from 6 a.m. to 8 p.m. daily.

The Village of Lewiston welcomed Tim Hortons to Center Street on Tuesday. Canada’s premier coffee and bake shop opened as the main tenant in Ellicott Development’s three-building plaza at the corner of North Eighth and Onondaga streets.

Franchisee Robert Burns said, “It’s been a long time coming.” He thanked local elected leaders, Ellicott Development CEO Bill Paladino and the construction team “who helped us get this together.

“Hopefully, we’ll do good. And hopefully the people like us down here. We want to be a good community member.” 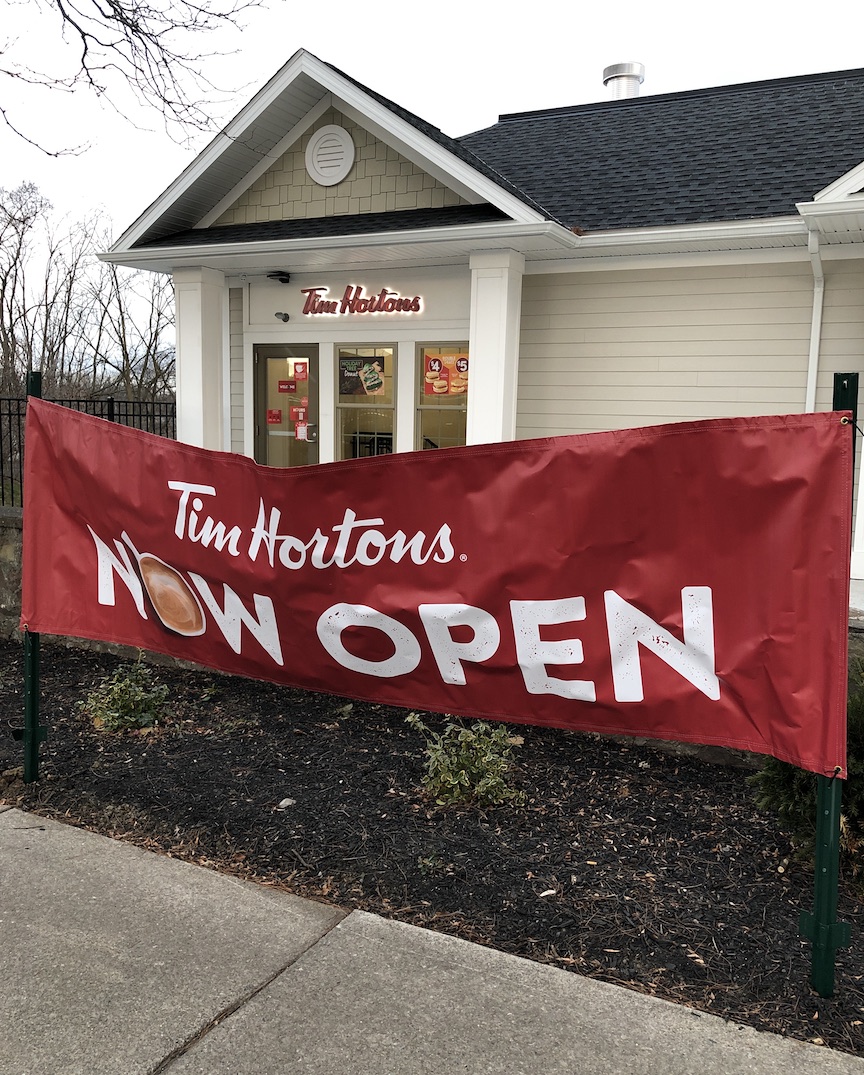 It was eight years ago – to the date – when The Sentinel reported Buffalo-based Ellicott Development purchased the vacant Lewiston land at 756, 784-790 Center St. At that time, Paladino said, "It's a quaint town. It's been on our radar for a long time. We like Niagara Falls; we like Niagara County. We feel it's got a lot of amenities and has needed some different services. We think it's a nice opportunity for us."

The first plaza plans were presented in August 2013.

“This long-awaited development is going to be an asset to the village, and I can't wait to see it completed,” Welch said at the time. "While on the Planning Commission, we worked diligently on the project and asked Bill to make many design changes, and he complied without question. Thank you for investing in our village, and thank you for your patience during the development process. It was a pleasure working with you." 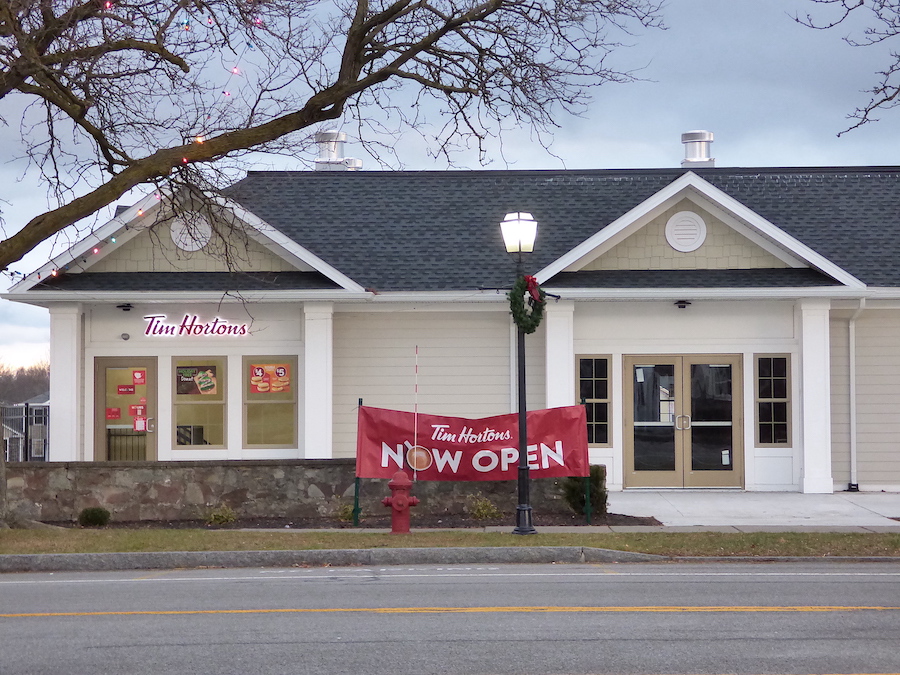 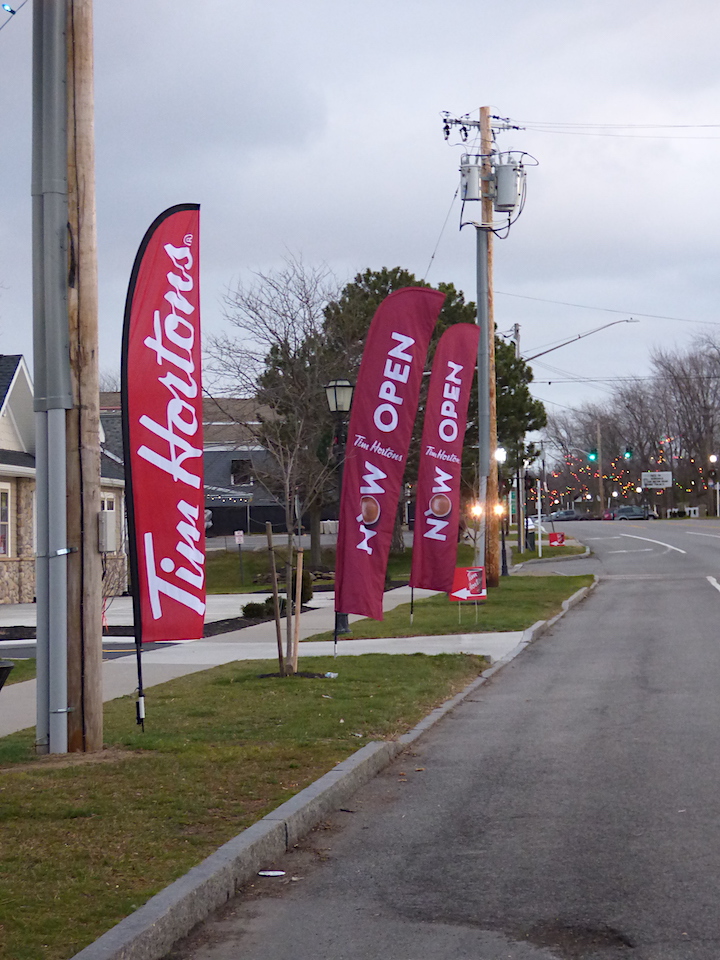 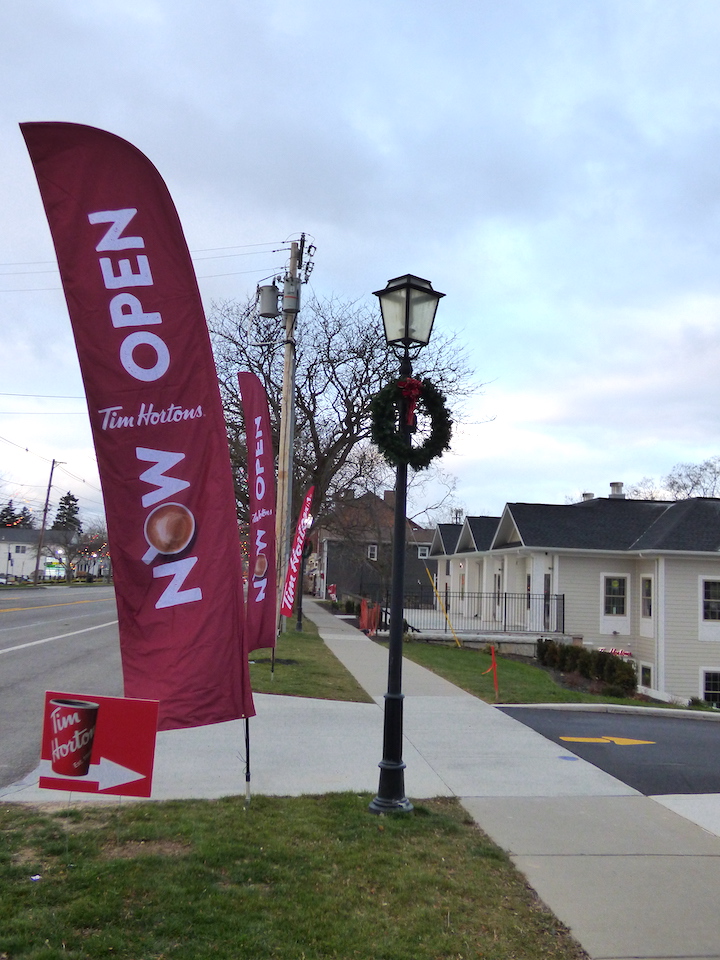 Inside the eatery, the décor is modern. Management said it was important to pay attention to aesthetic details, so this Tim Hortons would fit with the look and style of the Village of Lewiston. The counter has multiple serving areas, and the overhead menu offers the restaurant’s signature coffees, doughnuts (Timbits, too), breakfast sandwiches and specialty/seasonal items.

Unfortunately, many of the tables cannot be used right now, due to New York state COVID-19 restrictions. Lewiston was placed into a “yellow precautionary zone” on Monday, further limiting the number of patrons who can dine indoors for the time being.

Outside the two-story building, the signature red and black signs and corporate logos are lit by soft lights, as approved by the Village of Lewiston.

In 2021, when the weather breaks for spring, an outdoor patio will be utilized in front of the Center Street entrance. 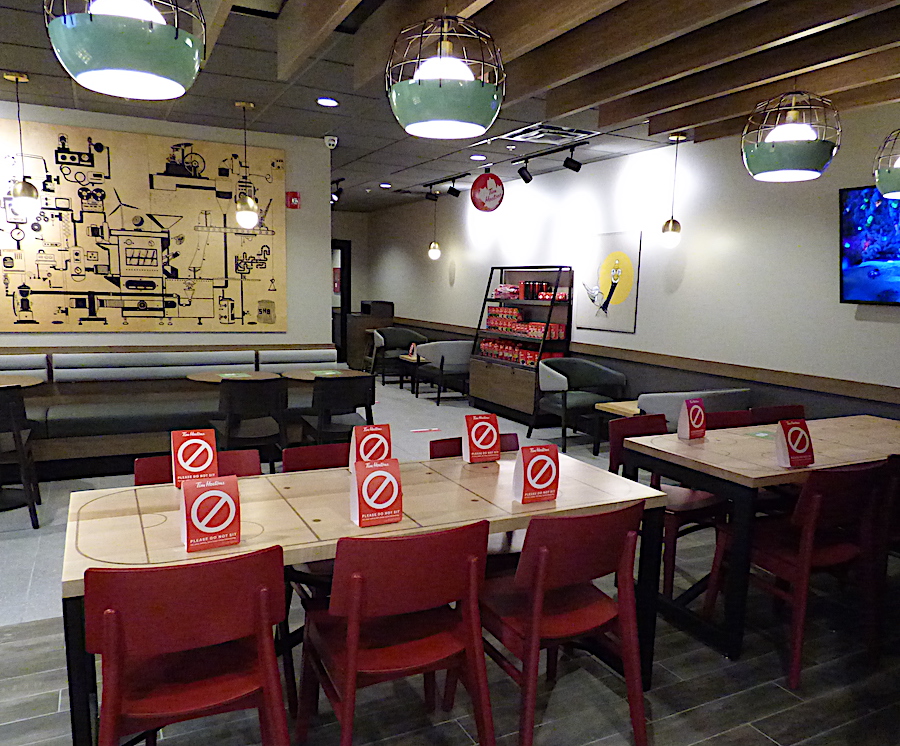 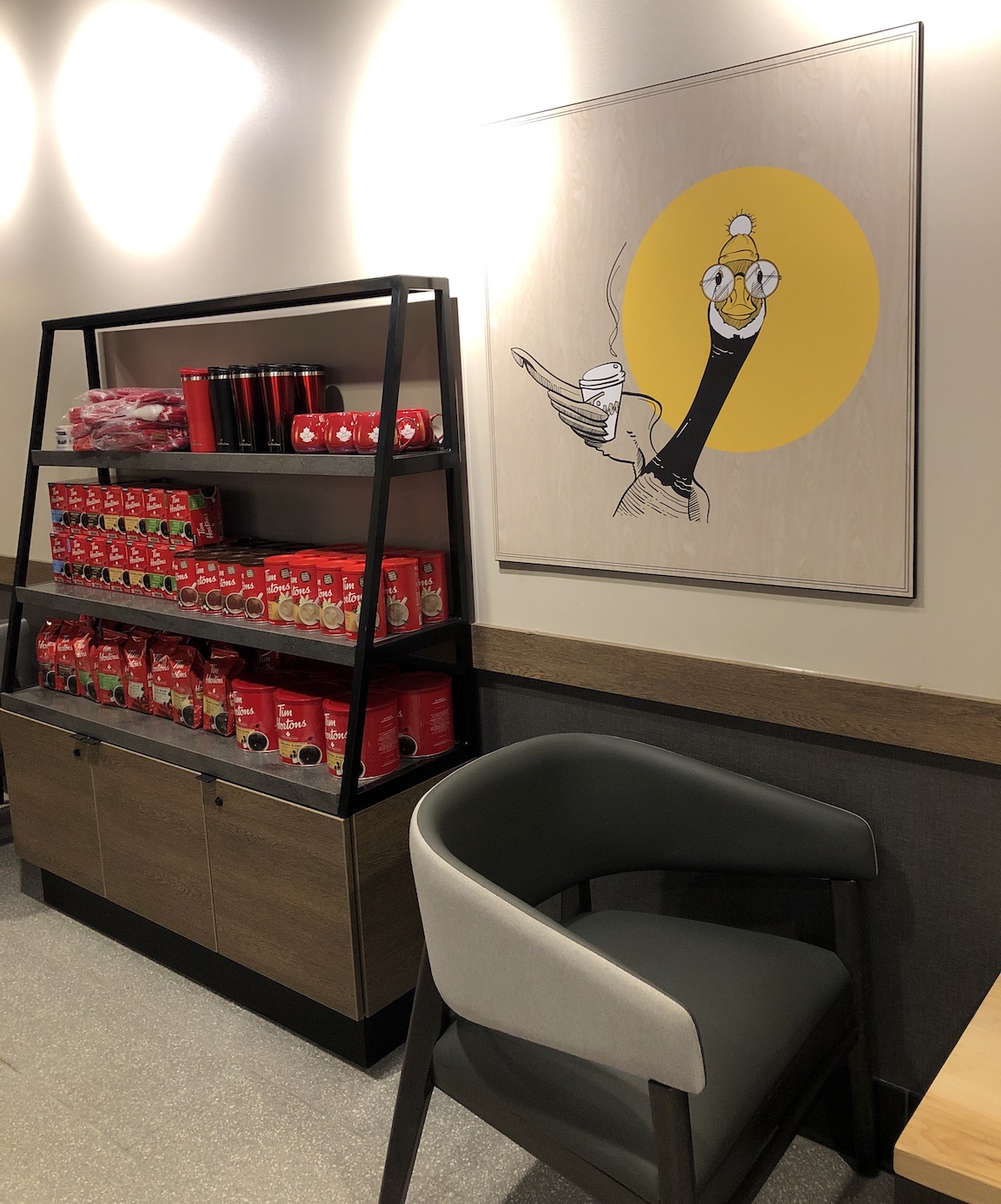 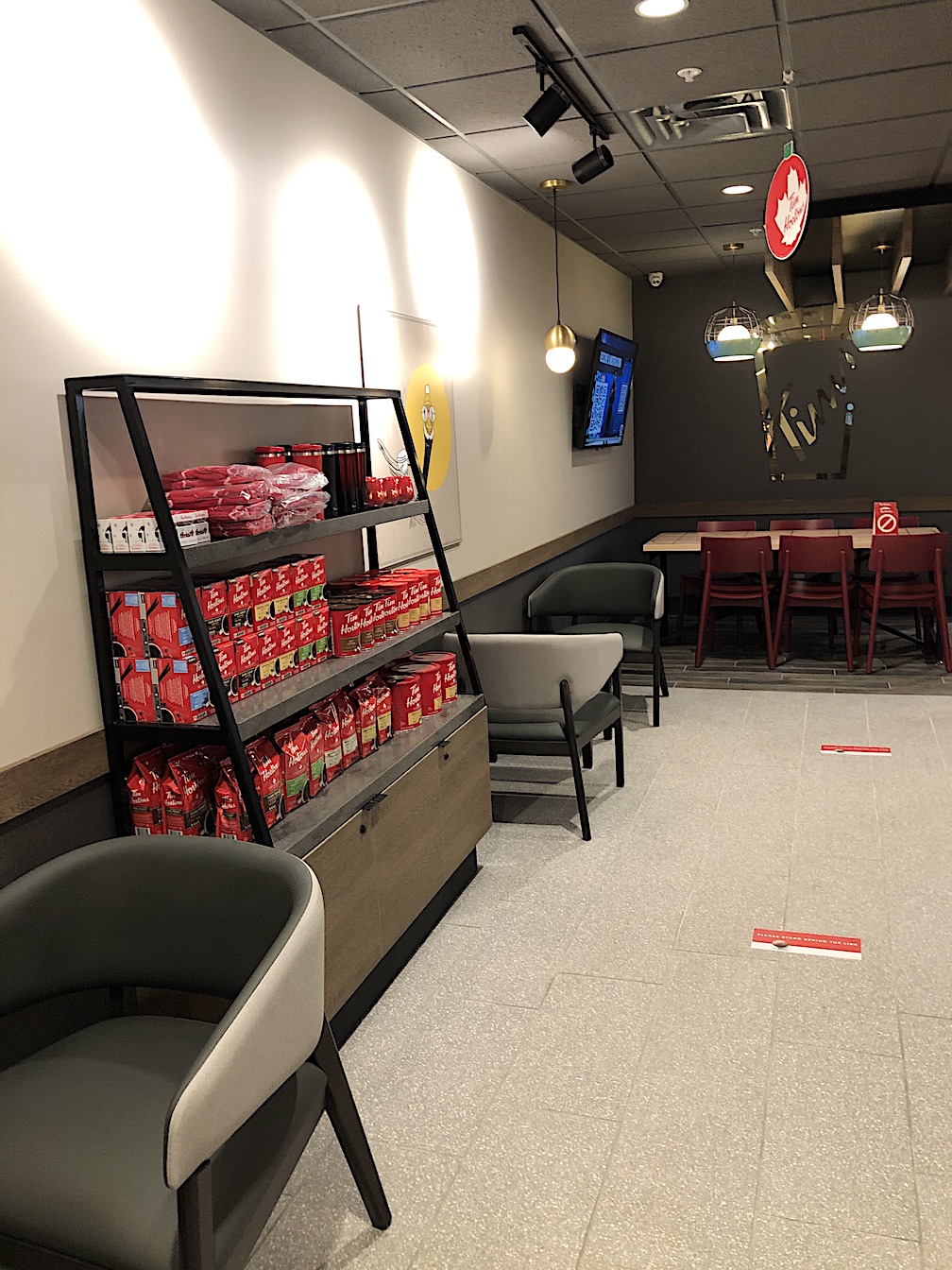 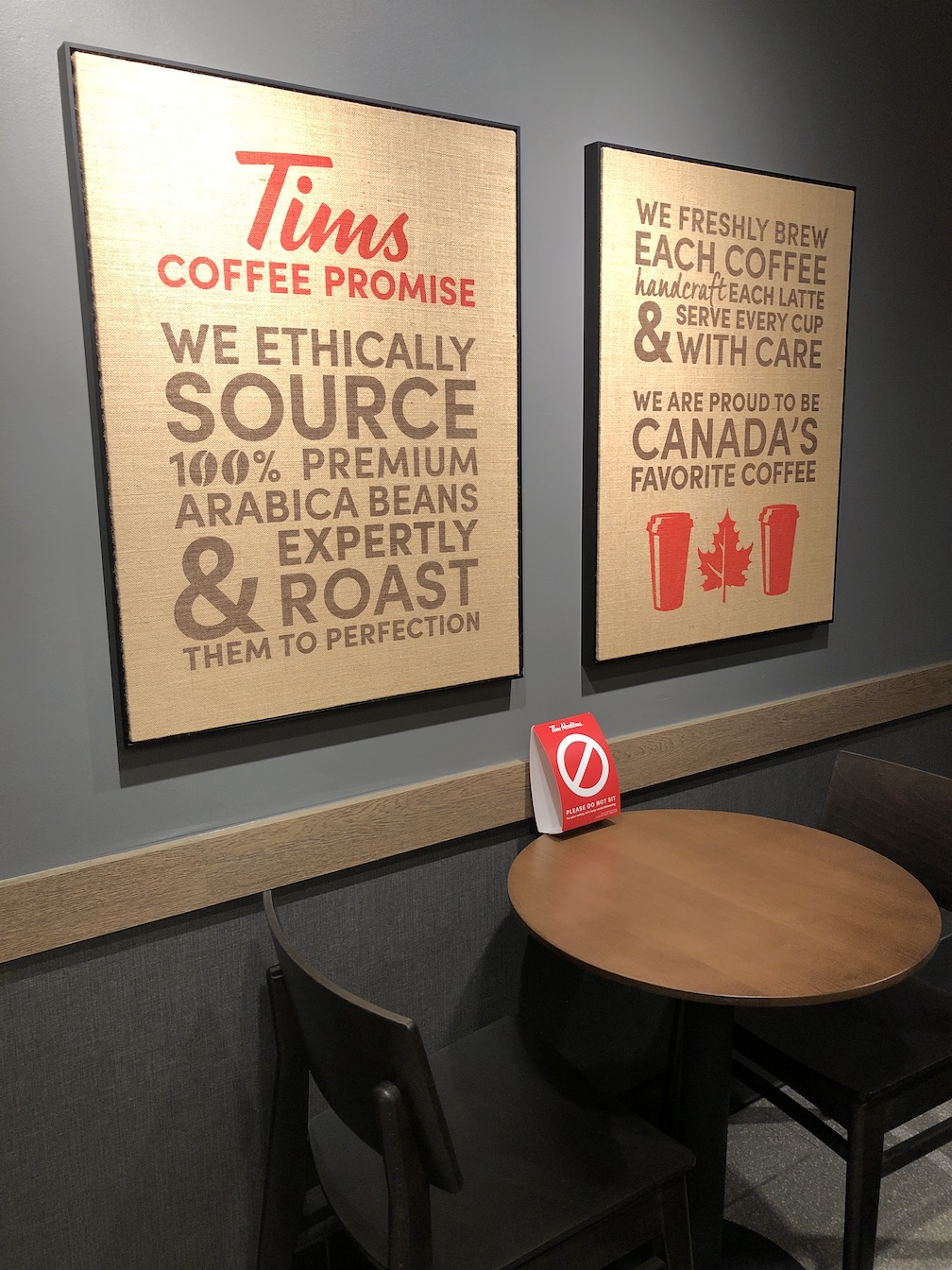 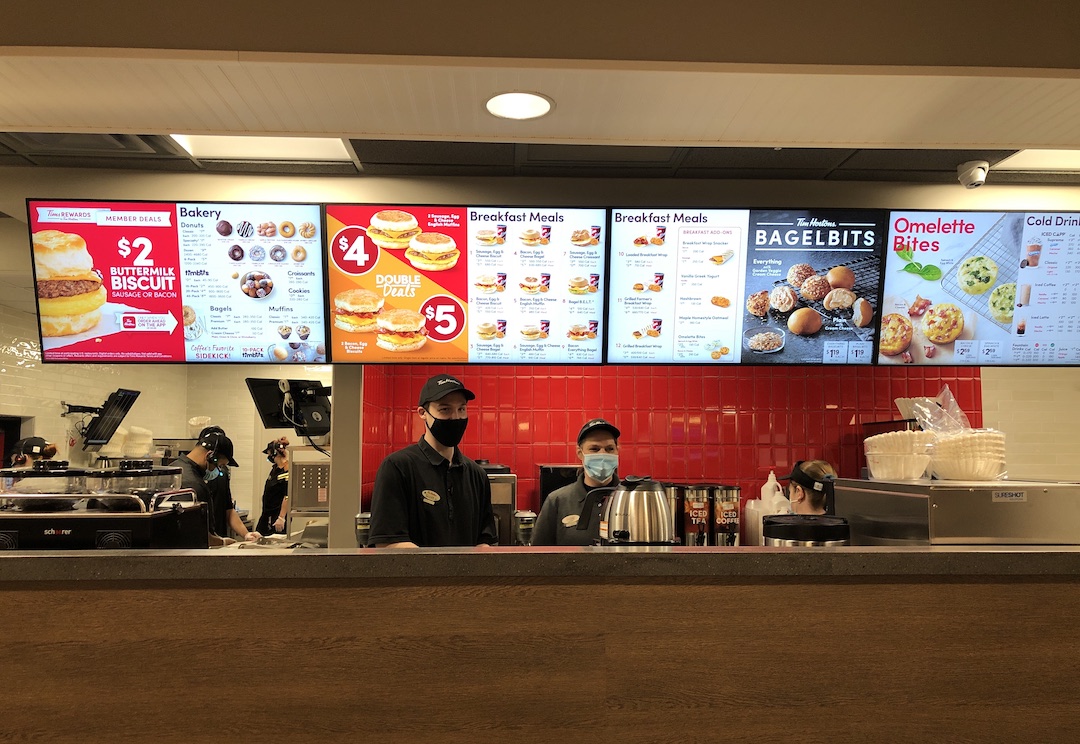 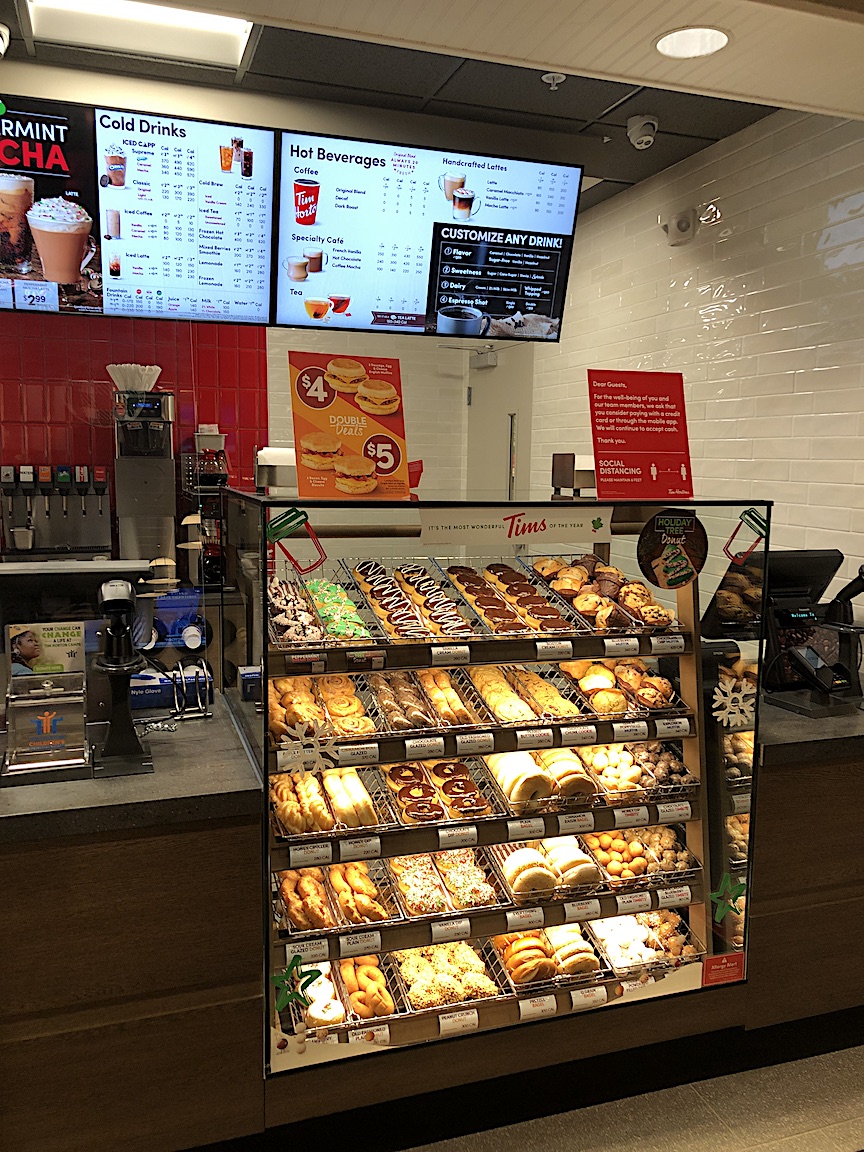 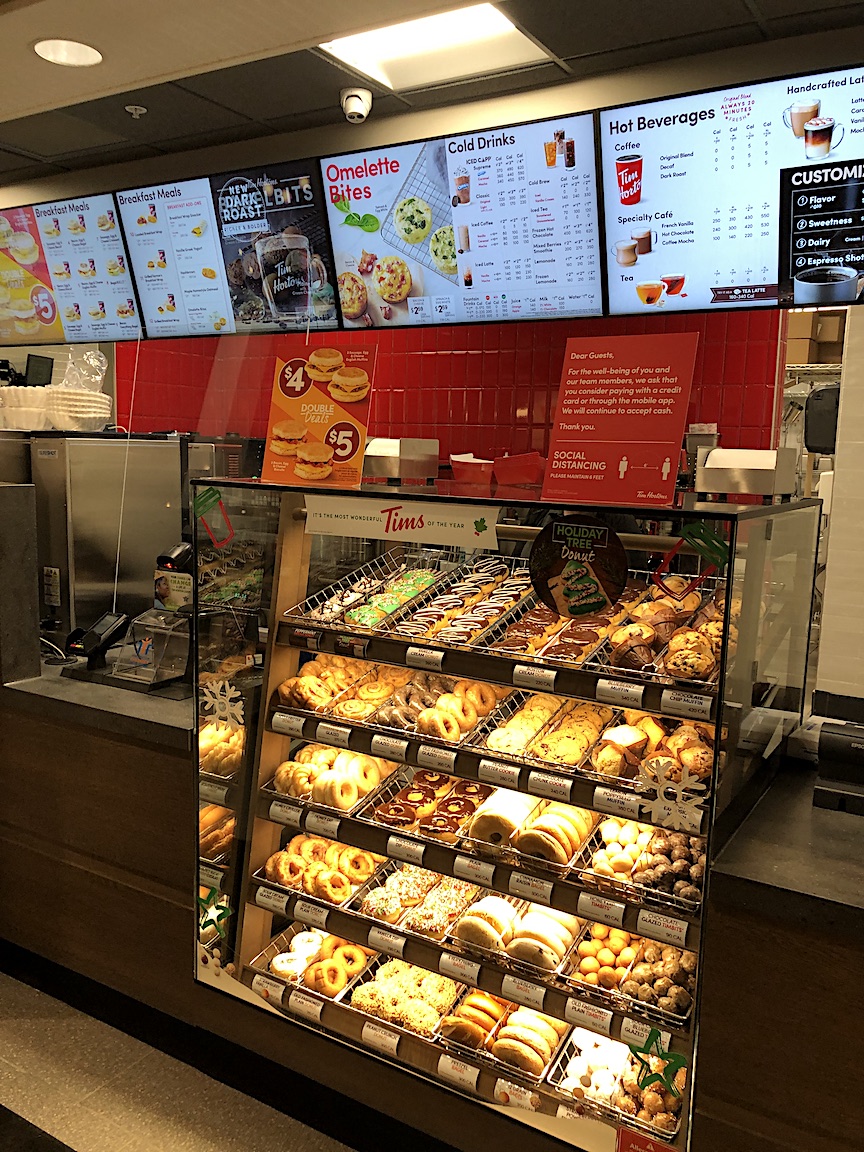 This location is accessible two ways: Via an entranceway on Center Street, which has a two-story flight of stairs leading down to the main restaurant on the ground floor; or via a ground-level door inside the plaza.

Motorists can enter the plaza via Center Street or North Eighth Street. If they enter using the former, the drive-thru is immediately to the left and around the building. The entrance is on that side, parallel to the drive-thru entry point.

Patrons can exit the plaza at North Eight Street. The Center Street road is a one-way ingress.

CENTER STREET SIDE: Enter only 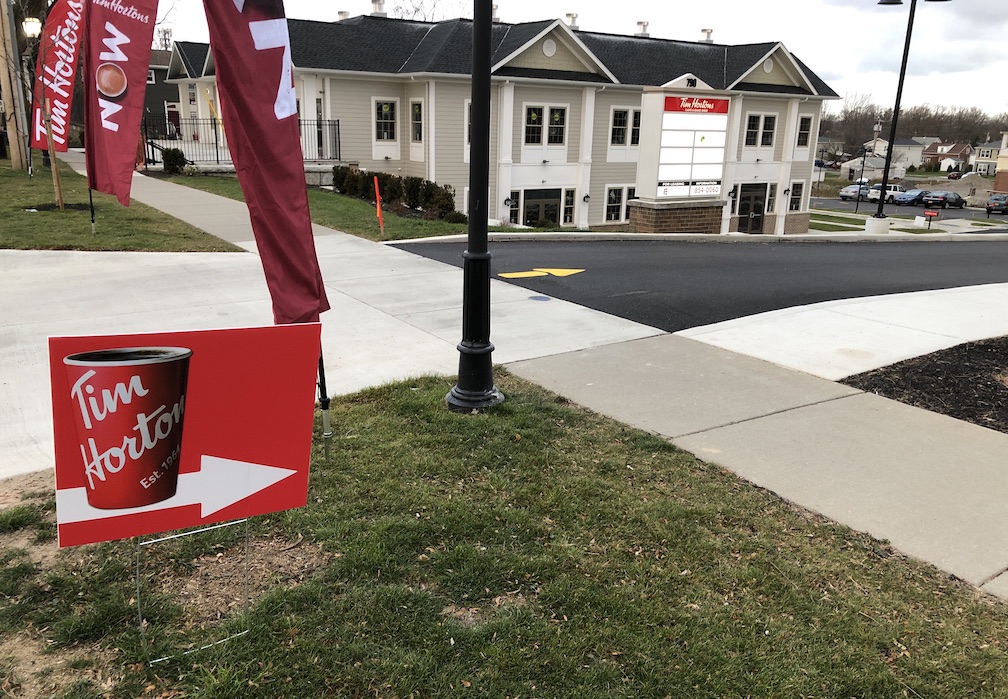 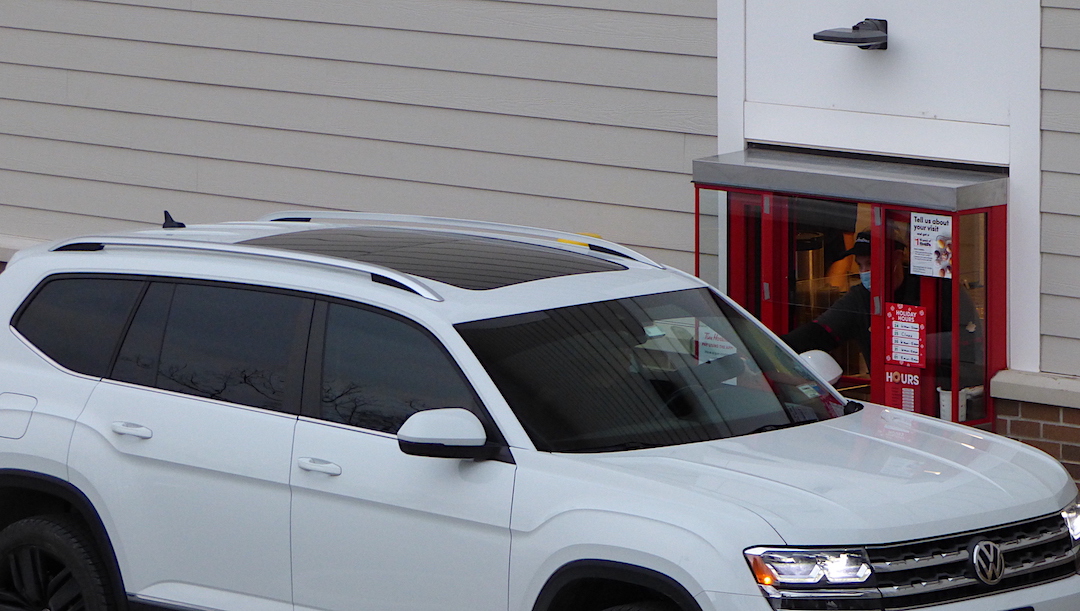 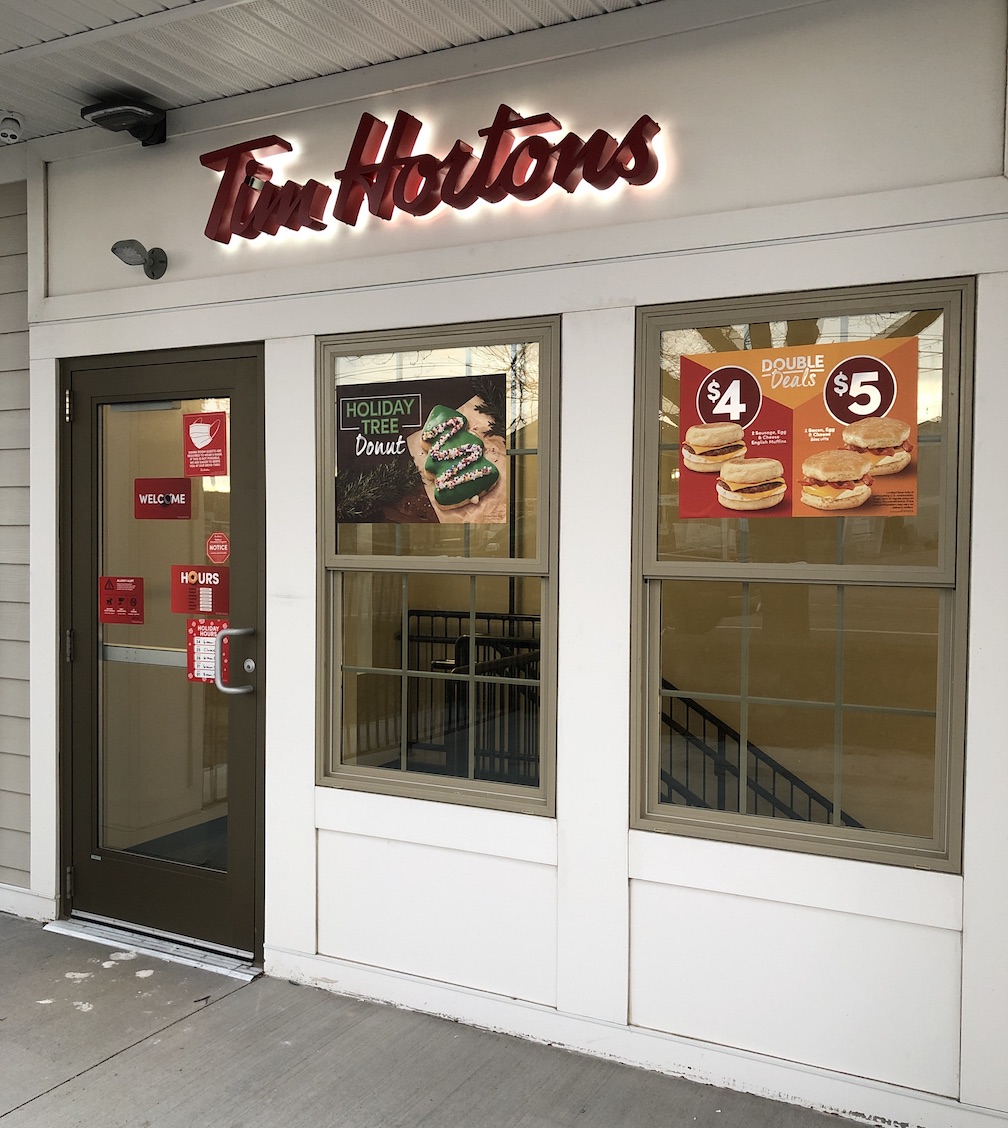 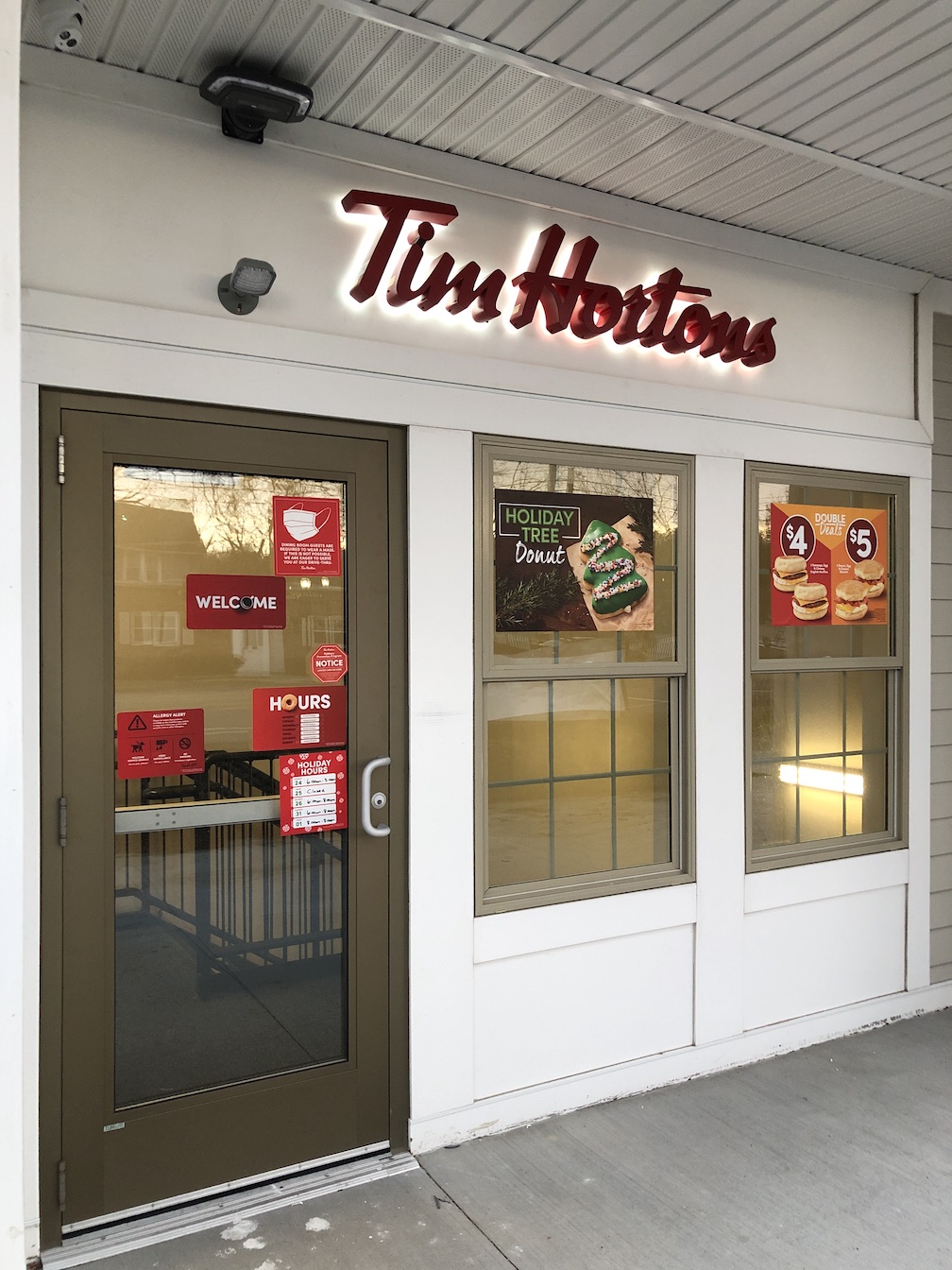 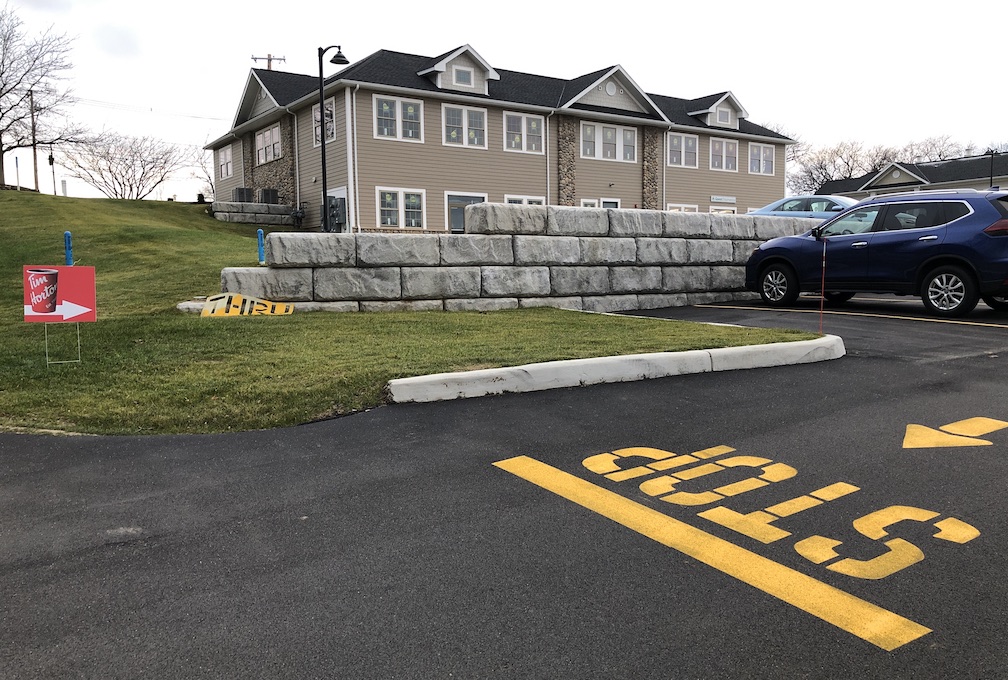 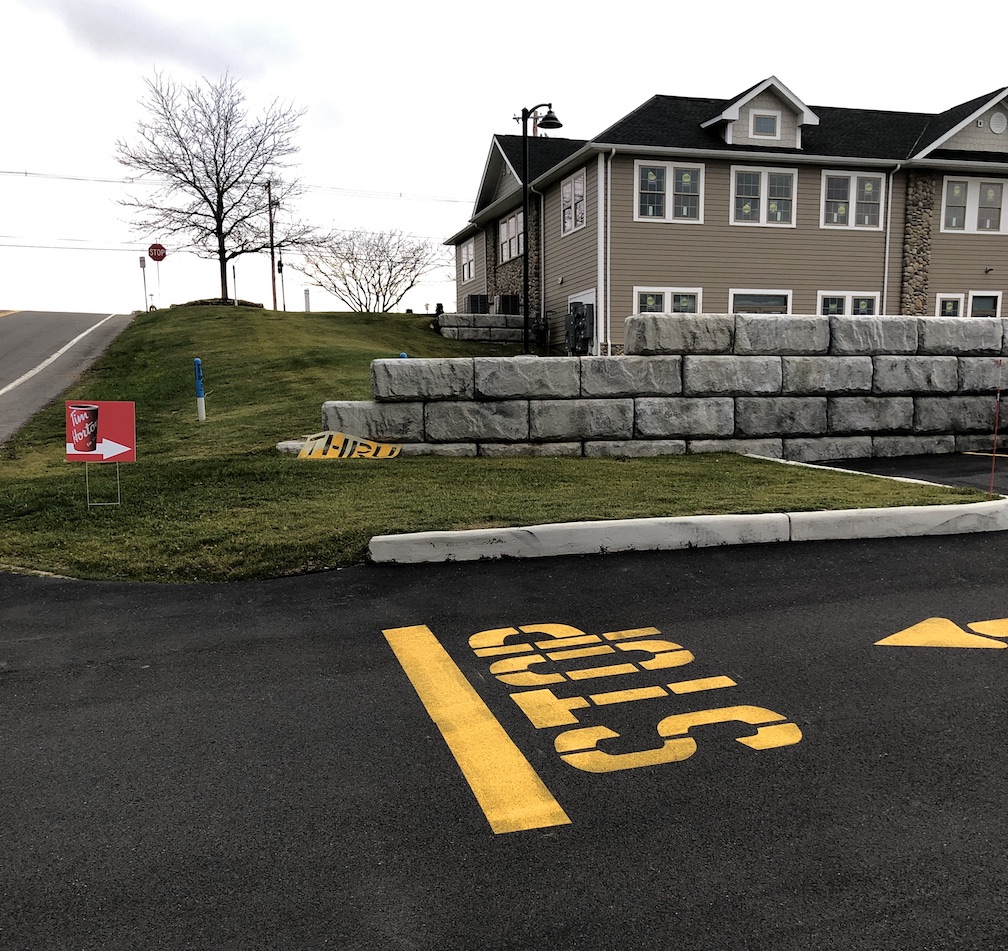 Short of a Subway inside the Exxon gas station on Center Street, residents have been without a traditional fast-food eatery (or traditional drive-thru window, for that matter) since McDonald’s opted not to renew its lease at the Frontier House in December 2004.

Though this is his first location in the Village of Lewiston, he has worked with local organizations including the Kiwanis Club. Burns has donated funds to charitable endeavors in past years.