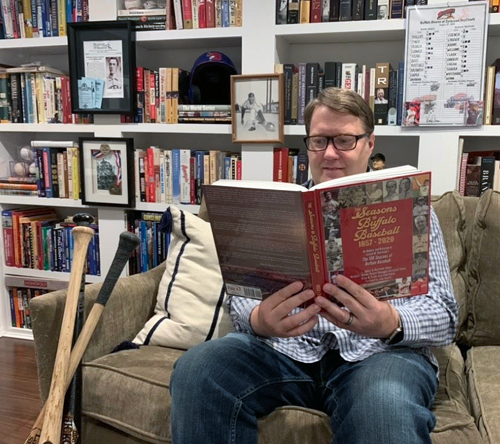 Brian Frank, an assistant editor of "The Seasons of Buffalo Baseball 1857-2020" and founder of herdchronicles.com enjoys his copy of the book this week.

“The Seasons of Buffalo Baseball 1857-2020” is a 400-page, hardcover journey through the illustrious history of baseball in The Queen City. It is filled with more than 150 images, rare illustrations, cartoons, and page after page of baseball facts and follies – a true reflection of Buffalo’s 163-year love affair with the grand old game.

After three years of intensive work by author Jim Overfield and his writing/editing team of Mike Billoni (an NFP contributor) and Brian Frank, this book is now available in stores and online for baseball lovers across America.

Overfield said the book is a tribute to his father, Joseph, one of the Buffalo Bisons most passionate fans.

“In 1985, my father wrote ‘The 100 Seasons of Buffalo Bisons Baseball,’ which encouraged widespread interest in the history of the team,” he said. “His plan had always been to write an update, but sadly he passed in 2000 before accomplishing that objective. After going through his boxes of notes and memorabilia on the subject, I decided to take on my father’s book editing and writing challenge. The release of this book in stores and online is truly the culmination of my father’s dream and my tribute to him and his passion for Buffalo baseball.”

“The Seasons of Buffalo Baseball 1857-2020” has received rave reviews from sports industry icons. Emmy Award-winning sportscaster Bob Costas noted it as the ultimate connection between the city and the game: “To say that Buffalo has a rich baseball history is to deal in understatement. The ‘Seasons of Buffalo Baseball’ is a lively and entertaining chronicle of a town’s love affair with our National Game.”

Multiple National Sportscaster of the Year and ESPN NFL studio host Chris Berman heralded the book’s historic significance: “ ‘The Seasons of Buffalo Baseball’ is an ode to Western New York’s pastime stretching from Bison summer evenings today in their welcoming downtown park, back to the days of the Rockpile and way back, back, back before that.”

On Dec. 8, “The Seasons of Buffalo Baseball 1857-2020” will officially be launched in a free, virtual event co-hosted by Pete Weber, former "Voice of the Bisons" and current Nashville Predators broadcaster; and Greg Brown, Weber’s former Bisons broadcast partner, now the "Voice of the Pittsburgh Pirates.”

Included in the event will be a number of special guests, including Cedric Holloway and Willie “Hutch” Jones, directors of the Omega Mentoring and The Willie “Hutch” Jones Education and Sports programs, respectively, whose programs are benefitting from proceeds of the book sales and sponsorships. Full details of the launch will be announced in the “Seasons of Buffalo Baseball” newsletter and social media sites. 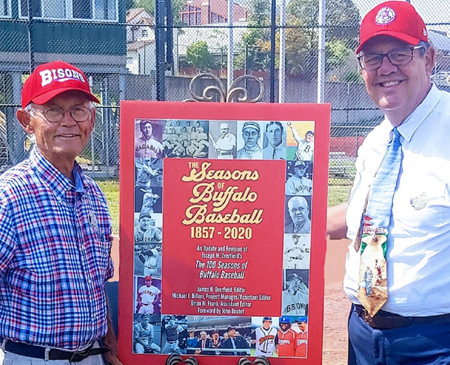 Jim Overfield, left, and Mike Billoni with an enlarged cover of the book at an August press conference.

“I have been extremely blessed through this three-year journey with Jim Overfield to publish this book,” said Billoni, the former vice president and general manager of the Buffalo Bisons, a member of its Buffalo Baseball Hall of Fame, correspondent for The Island Dispatch, secretary of the Rotary Club of Grand Island, and member of the Grand Island Chamber of Commerce and Knights of Columbus at St. Stephen’s R.C. Church. “The update and revision of his dad’s original book in 1985 means a lot to me because I worked closely with Joe Overfield on that project back then. I am extremely excited we will be keeping the legacy of his dad alive with such a wonderful program on the East Side of Buffalo at the site of the former War Memorial Stadium – The Joseph M. Overfield Memorial Baseball, Softball, Soccer and Mentoring Program, which allows us to work with two good friends, Cedric Holloway and Hutch Jones.”

For Grand Island residents, the book will be available during business hours for $54.32 (tax included) at the Niagara Frontier Publication offices, 1859 Whitehaven Road. $5 from each sale will go toward the Overfield mentoring program.

“The Seasons of Buffalo Baseball 1857-2020” is a collaborative effort that draws heavily from Joe Overfield’s book, especially its year-by-year summaries of each Bison season from 1857 to 1985. This richly illustrated, 400-page book updates the book to 2020 and adds substantial new material about Bison players, managers, owners, ballparks, fans, and memorable games. It also describes Buffalo’s surprisingly important role in baseball history.

Many authors have contributed to the book, including Brian M. Frank, an assistant editor on the project and creator of the website The Herd Chronicles; Paul Langendorfer, author of “Baseball in Buffalo”; Budd Bailey and Mike Harrington of The Buffalo News; Sam Maiorana of the Rochester Democrat and Chronicle; and former WGRZ-TV Channel 2 sportscaster Jonah Javad.

James Overfield is a native of Buffalo and a history professor emeritus at the University of Vermont. He is the author of several history textbooks, including the popular The Human Record. He is a lifetime sports fan following in the footsteps of his father, Joseph. His passion for sports led him to become a certified official for baseball and basketball at the high school and college levels in Vermont. He is the father of three children, all of whom he made sure joined his family’s great tradition of becoming lifelong Buffalo sports fans.

Joseph M. Overfield was born in Buffalo on April 7, 1916. When he was 9 years old, he clipped a newspaper coupon for a free ticket to see his first Buffalo Bisons baseball game and fell in love with the team, growing up to become the preeminent historian of all things Bisons. His magnum opus, “The 100 Seasons of Buffalo Bisons Baseball,” encouraged widespread interest in the history of the team upon its publication in 1985. He was a founding member of Society of American Baseball Research (SABR) and the key lobbyist for Pud Galvin’s 1965 induction into the National Baseball Hall of Fame. Overfield is a member of the Buffalo Baseball Hall of Fame and the Greater Buffalo Sports Hall of Fame. Outside of sports, Joe was a devoted husband to Clara, and loving father to Jim. He passed away on July 20, 2000, at the age of 84. Visit https://www.buffalosportshallfame.com/member/joe-overfield/.

The Omega Mentoring Program is a Buffalo not-for-profit organization of committed volunteers and mentors who inspire and motivate at-risk youth toward college through one-on-one mentoring. Mentors nourish a sense of pride, self-confidence, and competence in their mentees, which leads to greater success in family, social, academic and business situations. It provides leadership formulated to deal with myriad problems faced by youth with an emphasis on self-love, self-knowledge, self-development and spiritual development. Visit https://www.omegamentoring.com/.

Buffalo’s Willie Hutch Jones Education and Sports Programs have as their goal to provide instruction, at no cost, in fundamental life (social skills) development, sports skill development, as well as academic support in science and math. In keeping with research findings that children engaged in extracurricular activities experience 5 % improvement in test scores, or that children who regularly play chess can experience up to 17% improvement in test scores, the WHJESP programs deliver outcomes in delinquency prevention, academic improvement and behavior. The mission is to provide every child, at no cost, equal opportunities to engage in the highest-quality program, and to offer character-building activities through academics, sports, and the arts. Visit http://whjsc.org/. 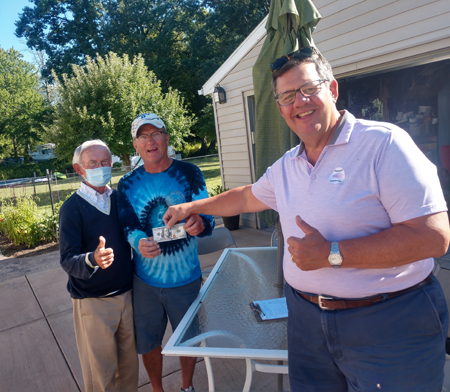 Jim Overfield, left, and Mike Billoni accept $100 for the first two books sold from Grand Island resident Kevin Hagen in August when Jim was in town promoting the book. Hagen received his books this week.