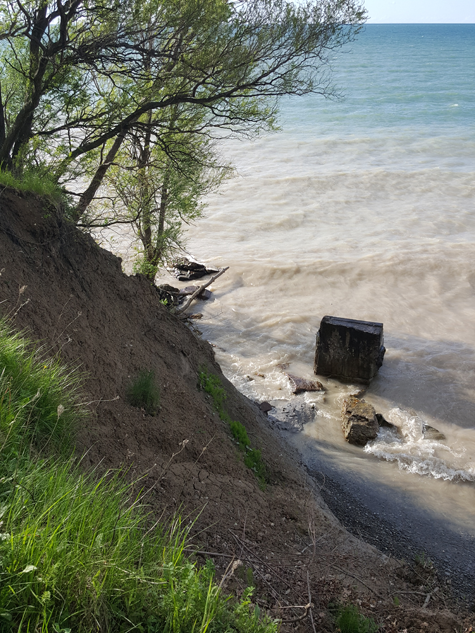 A look at the earlier shore erosion and corrective measures being undertaken by the Town of Porter on the Lake Ontario shoreline.

Despite the near-constant disruptions of COVID-19 throughout 2020, erosion rehab work along the Lake Ontario shoreline in Niagara County is slowly beginning to move forward.

Recently, the Town of Porter took a major step in addressing a nearly $500,000 shoreline improvement project in the Fort Niagara Beach neighborhood. Utilizing $350,000 in grant funding obtained under the Community Block Grant Development Program, a stretch of badly eroded lakeshore, owned by the town and located adjacent to the foot of Park Avenue was recently stabilized. Mark Cerrone Construction inserted large boulders and relocated soils to prevent further shore damage.

Utilizing state grant funding, the town is now continuing the shoreline rehab at Fort Niagara Beach with more than $40,000 in additional shore enhancements expected to be done by Applied Ecological Services of Grand Island.

This project represents a growing list of shore work now taking place in the county. Under the New York State Lake Ontario Resiliency and Economic Development Initiative announced last year in response to worsening Lake Ontario flooding conditions, 11 lakeshore-area rehab projects are moving ahead in communities stretching from Newfane to Youngstown. Significant projects along the Lake Ontario waterfront include the $14 million Olcott Harbor Breakwater in the Town of Newfane, the $4.4 million Wilson Wastewater Treatment Plant in the Village of Wilson, the $3.6 million Sunset Island West Barrier Bar in the Town of Wilson and the $2.1 million Village of Youngstown Waterfront Project. The $1.2 million Lewiston Landing rehab in the Village of Lewiston was completed earlier this year.

Not including the Porter shore rehab work, total cost of those projects amounts to $31,794,688 in improvements to benefit Niagara County lakeshore communities.

And the work along the lake continues.

Just before the Thanksgiving holiday the U.S. Army Corps of Engineers, Buffalo District, announced plans for an emergency shoreline protection project on the grounds of Old Fort Niagara in Youngstown.

“The purpose of the project is to protect historically significant structures at Old Fort Niagara (i.e., the French Castle, North Redoubt, Old Fort Niagara Seawall, and other contributing elements to the NHL), from Lake Ontario derived erosional forces,” the Corps said in its Nov. 20 announcement.

According to the Corps, the proposed Old Fort Niagara project would include installation of an armor stone revetment with mechanically stabilized earth and vegetative plantings. The revetment with MSE and plantings would start at the existing eastern terminus of the historic masonry wall and extend east approximately 400 feet along the eroding shoreline bluff on the lakeshore. Two-layer armor stone would be placed on top of underlayment stone and bedding stone on top of an slope planned for front of the eroding bluff.

At the top of the armor stone revetment, an MSE bench would be constructed that would serve as a splash pad and partial retaining structure for the upper slope crest to provide a platform for plantings, according to the Corps release. An approximately 0.5-acre area of the upper portion of the bluff would include bioengineering/planting.

“The proposed project would help reduce shoreline erosion at this location, protect the historic masonry wall from being outflanked or undermined, and would help protect significant historic resources within the project vicinity,” the Corps stated.

In its evaluation, the USACE conducted coastal and wave analysis to ensure the project is designed appropriately to withstand the fluctuating conditions of Lake Ontario and meet the project objectives. In this analysis, the estimated 10-year wave height and 20-year water level were identified as the design criteria needed to protect the shoreline from erosion for a 50-year project design life. The estimated wave heights and water levels were derived from historical averages over 45- and 52-year periods of record, respectively.

The wave run-up associated with this wave/water-level event is approximately 259 feet. This wave run-up is expected to only occur once during the 50-year life of the project. This event is the appropriate scenario as the basis for design at this location per USACE best management practices for design. The proposed revetment would include a stone crest elevation of 253 feet and a mechanically stabilized earth elevation of top elevation of 259 feet.

The Corps said it is continuing its reviews of the project for compliance with state and federal laws. It noted an integrated detailed project report is now in the process of being drafted and will be released for public review and comment in 2021.

The current Corps OFN project study opened for public review on Nov. 20 and continues to Dec. 19. It is accessible online at https://www.lrb.usace.army.mil/Missions/Civil-Works/Public-Review-Documents/ under the document title “Old Fort Niagara Section 404a.” Comments on the project may be directed to the Corps at [email protected]. 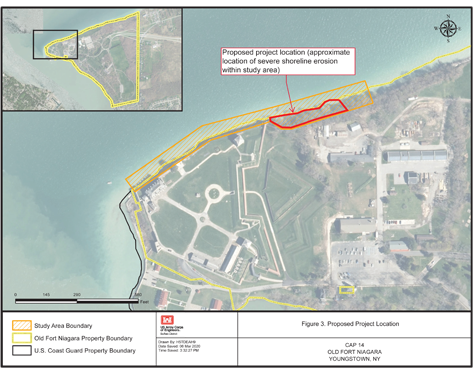 A view of the proposed Army Corps shoreline rehab project under consideration at Old Fort Niagara. (Courtesy of the Army Corps).