The Historic Riviera Theatre in North Tonawanda has COVID-19 updates - and calls to action - prominently posted on its marquee.

Earlier this week, New York state’s movie theater industry breathed a collective sigh of relief as Gov. Andrew Cuomo announced theaters across the state (except for NYC) could finally begin to reopen. Per state safety guidelines, theaters can only maintain a 25% capacity; with no more than 50 people in front of each movie screen.

However, the announcement made no mention of independent theaters that specialize in live entertainment. These industries have been among those hardest hit by the COVID-19 pandemic, and by some estimates, may never fully recover. The National Independent Venue Association estimates nearly 90% of live, independent music venues could close permanently because of the shutdown.

The uncertainty is being felt by many independent theaters throughout Niagara County, including the historic Riviera Theatre in North Tonawanda. The venue, which opened in 1926 and is home to the world-renowned “Mighty Wurlitzer” pipe organ, has struggled to stay afloat since the shutdown began. As the months have dragged on, Executive Director Dave Fillenwarth says the theater’s situation is dire.

“It’s very serious. We are a not-for-profit and we’ve had to layoff staff and we had salary cuts and (the whole industry) is looking pretty grim right now; so we’re not the only theater. It’s been estimated 90% of independent theaters will never open again and we’re fighting not to be one of those,” he says.

Fillenwarth says the lack of communication from state officials has been the most frustrating part of the ordeal.

“The fact that it’s not even being talked about is the frustrating part,” he says. “Quite honestly, if we just had a target date; if they could tell us that we’d be opening Jan. 1 or Feb. 1 or March 1, and here’s your capacity; that would be wonderful because then we could start putting together a business plan and we can have shows booked and put tickets on sale. There would be patron confidence that it’s going to happen and (the public) would say ‘We’ll support the arts again.’ But the fact that there’s just no plan in place is the really frustrating part here.”

While the Riviera has some capabilities to show films, Fillenwarth says such a plan wouldn’t be feasible. Beyond acquiring film rights, theaters can only have a maximum of 50 patrons, something that isn’t much of a problem for a multi-screen cinema, but is not conducive to the Riviera’s limited stage space.

In the absence of a state provided plan, Fillenwarth says the theater worked with Niagara County to develop its own plan, which they have sent to state officials for approval. The Riviera’s plan – which calls for 50% capacity, required masks, temperature checks and social-distance seating measures – mirrors other state-approved guidelines for comparable businesses.

“We’ve done everything that they’ve asked. We’ve gotten the MIRV 13 air filters; we’ve waited for them to flatten the curve. We’ve been patient. We’ve done our due diligence and gotten everything approved by the Niagara County Health Department. The most frustrating thing is we lay that all out there and try to get an answer from them and they don’t even respond to us.”

The Riviera isn’t the only local theater in the dark. A recorded message for the Ghostlight Theatre has a pointed message explaining a similar situation. It states: “Here is what happened – we had gotten some guidance from the New York COVID-19 hotline regarding low-risk Indoor arts and entertainment and protocols for operating a haunted house. We had talked to several people – who couldn’t have been nicer – and we were under the impression that if we used masks, had less than 50 people, followed social distancing and had plenty of hand sanitizer on hand, that we could proceed. It was indeed unsettling to find out that that was not the case. It is a confusing time for everyone and the North Tonawanda and county people have been very helpful and sympathetic to our dilemma. When we get a definite go-ahead, it is our intention to present our season.” 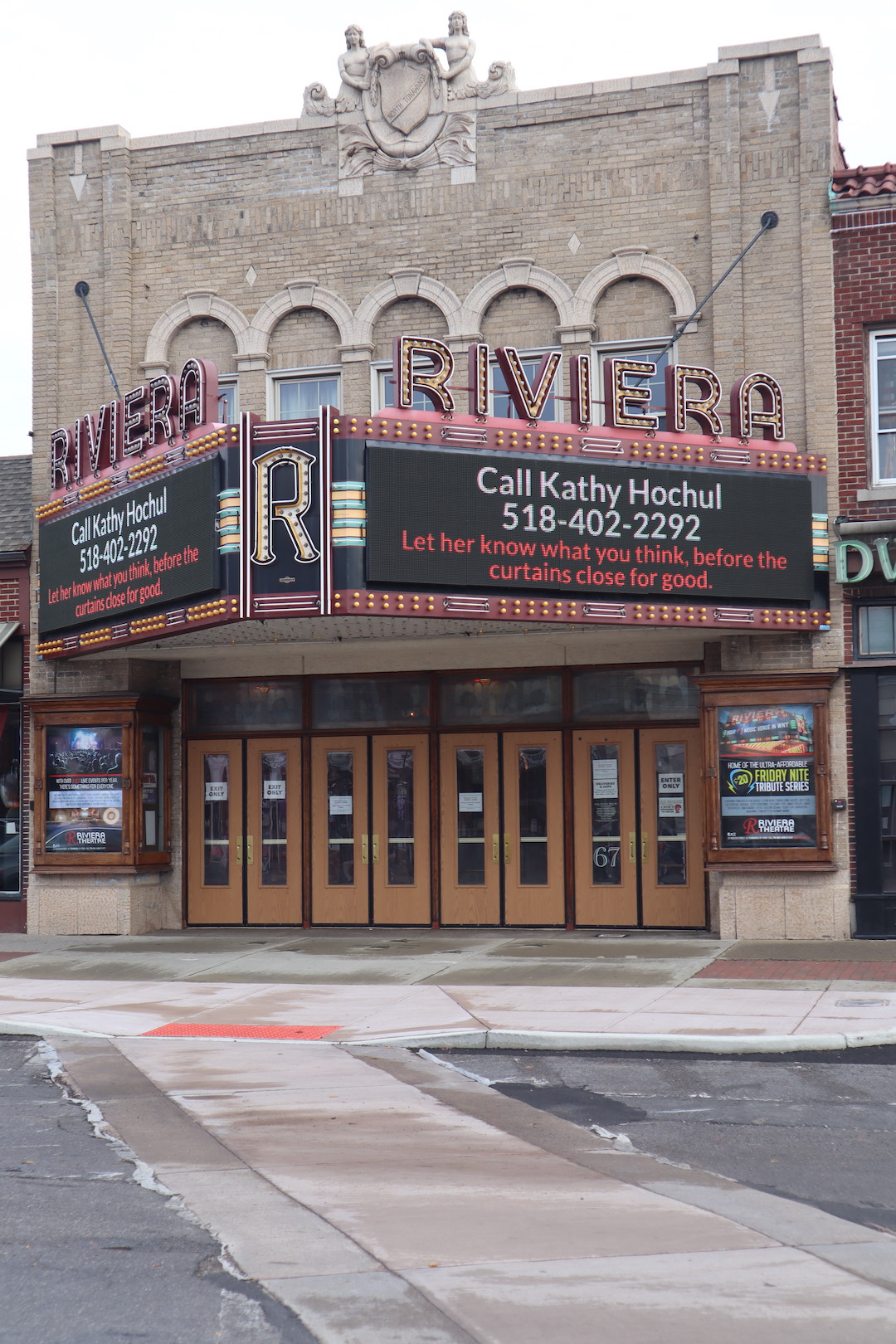 The Historic Riviera Theatre in North Tonawanda has COVID-19 updates – and calls to action – prominently posted on its marquee.

Local theaters aren’t the only ones fed up with the state’s inaction. Recently, city and county officials were joined by New York State Sen. Robert Ortt for a highly publicized press conference outside the Riviera, calling on Albany to act. Since then, Niagara County Legislator Jesse Gooch created lawn signs urging residents to reach out to Lt. Gov. Kathy Hochul. The Lawn signs are available for a cash donation of $20 and can be purchased at the Riviera box office on Wednesdays and Thursdays between noon and 3 p.m.

Now, North Tonawanda city officials are imploring residents to step up their efforts. On Tuesday, the Common Council passed a resolution spearheaded by Alderman-at-Large Robert Pecoraro urging residents to call and write to Albany.

“Additionally, you can also complete an online form at https://www.governor.ny.gov/content/goveor-contact-form,” the resolution states.

“I want a call to action and I need everybody’s help with that. They’ll not only be helping the Riviera, but it helps the Ghostlight and other local theaters around like the North Park Theater (Buffalo) and the Aurora Theater (East Aurora) and the Rapids Theater (Niagara Falls) etc. that need the guidance of what they can do to open,” Peccoraro says.

Residents are also encouraged to donate to the Riviera directly via its website www.rivieratheatre.org.

However, Fillenwarth says the best donation right now is the time it takes to contact state officials.

“Of course we always welcome donations, but more than that we really want people to voice their frustration and support us by delivering the message to Albany: Please acknowledge that independent theaters need to reopen. I mean, from a mental health aspect alone, people need an escape. They need two hours to free their minds, and live entertainment and concerts are so beneficial to that state of mind. We need people to stand up and help us be heard as we really need,” Fillenwarth says.

He was quick to note that what’s at stake isn’t just a few jobs and a nice building. Rather, Fillenwarth says it’s the area’s culture, historical identity and connection to the arts that are truly on the line.

“This thing is such a treasure here,” Fillenwarth says of the theater. “The building has been here for 94 years and it’s so important that future generations enjoy the arts. I mean, the people who work here; we’re just keyholders right now. The industry itself is going to really fall apart unless we try to save some of this going forward. It’s so important to really keep the arts alive, and that’s really what we’re fighting for.”