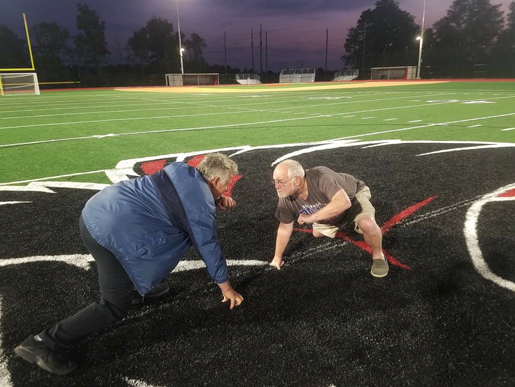 Additionally, renovations and repairs were done to various features of the existing athletic field, including leveling and resodding of the old field, repairing and replacing the running track, and other remediations to better accommodate shot put, pole vaulting and other track and field events.

The athletic renovations were just one piece in a number of capital projects for the district totaling $30 million. Other capital projects, some of which are set to begin this summer, include extensive paving at the middle and high schools, roofing work at Colonial Village Elementary, and numerous repairs and replacements to school HVAC systems.

Niagara Wheatfield School Superintendent Daniel Ljiljanich was excited to talk about the project and discussed some of the problems that the new amenities will solve. Among the biggest benefits he mentioned: the new field will allow both baseball and softball games to be played at the same time, while the new permanent lights will allow for more games to be scheduled later in the evening. Additionally, he said the synthetic turf will also aid various spring sports since seasonal rains have historically made the playing area difficult to maintain and caused frequent event cancellations and delays.

As he discussed the district’s excitement for the developments, Ljiljanich noted the new facilities are already positively impacting students who don’t play organized sports. While COVID-19 has affected the district’s physical education program, the new field has allowed for a suitable outdoor alternative.

“We are very excited that some of our fall sports are actually able to play and students can utilize the field,” he said. “But just as important, that field is currently being used for our P.E. classes. So, to have a huge outdoor space that’s always dry that our physical education classrooms can use … (it) couldn’t have come at a better time.”

Recently, with the new amenities completed and fall sports set to get underway, the district invited Class of 1970 alumni Gary Strenkoski and Dan Wendt to check out the new field. The pair had the distinction of playing in the first game ever on the school’s first official football field in the fall of 1969, a 28-0 blowout loss to LaSalle Senior High School.

Each said they were blown away by the new facilities, particularly considering what they were accustomed to in their playing days. 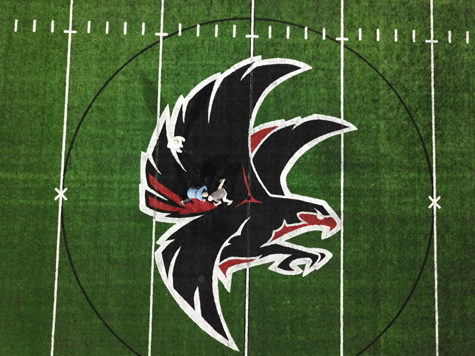 “We had none of that,” Strenkoski said. “At halftime we had to run all the way back to the high school lockers. And I don’t remember there being any concessions stands at all out there.”

Prior to the installation of that first field, NW played its home games at Hyde Park stadium in Niagara Falls, while their practice field at the time was quite literally in the middle of a cow farm. Strenkoski said that made for some interesting practices, to say the least.

“We had a drill where you would run in place and then coach would blow the whistle and you’d ‘hit it’ and you’d jump and go parallel with the ground on to your stomach. The farmer’s cows used to get loose; they’d be in our practice field. I remember one time ‘hitting it’ right into a pile of that stuff (laughs),” he said.

Strenkoski said conditions weren’t exactly better when the school opened the field, either.

“When we went out there to play in the very first game – Dan doesn’t remember this; it was 50 years ago – but we walked the field and had to pick up stones and glass off the brand-new football field. It was just crazy when I think back at it,” he said.

Out on the new field, the two – who have remained friends for over 57 years and enjoy a longstanding playful, joking relationship – went (at Strenkoski’s insistence) to the middle of the field on the 50-yard line and got down in a “three-point stance” for some photos.

Wendt joked on his Facebook page, “A few seconds after these pics were taken, I gave Gary a soft ‘forearm shiver’ – an actual football move. They say he will be out of the hospital by October.”

The two reminisced fondly over the experience, and shared fun memories of their playing days and their lasting friendship. But the experience also brought up some difficult memories. Each took some time to reflect on their former teammate, Terry Harvey.

During an away game in October 1969 – the same year NW’s first field was completed – Harvey sustained a broken neck during an unfortunate tackle, and became a quadriplegic.

Wendt, who had grown up down the street from Harvey, talked about his life after the accident, reminiscing about picking him up out of his wheelchair to take him to the drive-in. Harvey remained an active presence in NW sports, attending sporting events and even helped coach the Tyro Football League.

When Harvey died on April 13, 1996, at age 44, the school went on to rename the field in his honor. Wendt said that, while he wishes more kids today knew about Terry, his story and his lifelong Falcon pride, he was grateful the field was named in his honor and his legacy will remain.

“It’s kind of a shame that no one really remembers or talks about him. ... Kids these days might not really have a clue what happened,” Wendt said. “But (having the stadium named for him) really means a lot. I mean, when a 17-, 18-year-old kid has a life-altering accident like that – somebody that was an athlete; you know, he wrestled; he played football – all of a sudden he’s got to get around in an electric wheelchair. ... It means a lot. It does.”

For Strenkoski, the sum total of the experience – the memories, both happy and tragic; his and Wendt’s time back out under the lights – embodies that feeling of Falcon pride, something he wears as a badge of honor. He expressed a sincere gratitude for the current administration, not only for the night of nostalgia he and Wendt got to share, but for the work he sees being done to build and maintain lasting relationships with alumni.

“I’m proud to be a Falcon; I’m always gonna be a Falcon. That’s something I got from (former athletic director and vice principal) Bill Ross. We had great administration back in those days. They were very supportive of the kids that were involved in the music programs and involved in the arts and involved in sports. And I think with this superintendent, he’s almost like a clone of Ross (laughs). … I’m as excited about the field as I am that we have a superintendent who cares about the students, and the alumni, and the school.”

Looking ahead to the new amenities available to students, Strenkoski said he’s excited to watch a new generation get to build its own meaningful memories to reflect on one day, and grow a sense of what it truly means to be a Falcon.

“I feel really happy for the kids that are going to be playing on that field. And I intend to be there” Strenkoski said. “The past couple years, the school rented lights for some of those night games and it was fantastic. There were people in the grandstands; it was electric. It was like ‘Friday Night Lights.’ And I remember going to some other schools (that had better amenities) and I always said, ‘Why can’t NW have this?’ And now they do, and I’m really happy for the district; I’m happy for the kids. They’re gonna have experiences to talk about for the rest their lives.” 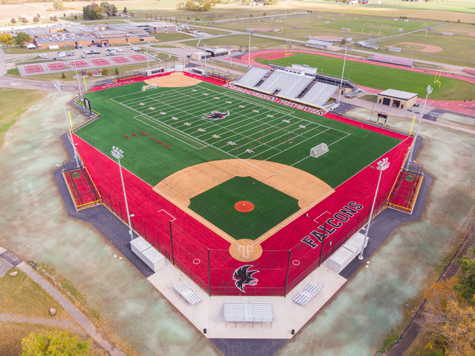