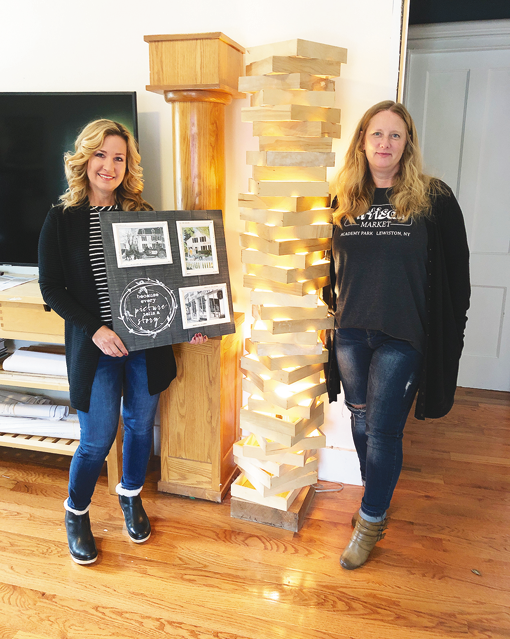 Though we don’t yet know if Santa Claus will fly into Academy Park this holiday season, smaller and perhaps wooden versions of St. Nick will make an appearance there next weekend.

Jamie Symmonds is bringing some of her holiday market vendors to the final Saturday of the Lewiston Artisan Farmers Market.

With festivals, concerts and events canceled this past summer – and people eager to get out of the house (added bonus: shop local/fresh) – the market has been a hit.

Normally, Symmonds would take such momentum and carry it forward into her annual holiday event at the Brickyard Brewing Company.

“This year, obviously, I’m unable to do the holiday market at the Brickyard Brewing Company, which I do every November – the week after Thanksgiving – for two reasons. One, we had the unfortunate circumstances of the BBC having their fire. But also, you can’t have more than 50 people in a space. And that’s the vendors; so then nobody could walk through the door (laughs),” Symmonds said. “People kept saying, ‘Will you move it someplace else?’ But that was the challenge: You can’t have people congregating, more than 50 people at a time. So, it just wasn’t gonna work this year.

“But I felt badly for these vendors. Me, having been a small business owner myself many, many years, I could not imagine the struggles with the challenges today. So, I thought, if there was a way to kind of merge the two.”

“We do welcome artisans at the market, but I really opened the door to all artisans who make their products – if interested,” Symmonds said.

Initially, the thought was to just have the holiday vendors join the summer merchants.

“The challenge has been that, because vendors haven’t been doing events this year, they also haven’t been making things this year – because they weren’t anticipating having some place to go,” Symmonds said. “So, I’m not sure how much holiday, per se, you’ll see. It’s more of an artisans event – like a general artisan. A lot of the vendors commented that they hadn’t been making stuff in order to prepare for an event, because this just sort of popped up for them.

“But I can say a lot of different artisans have shown interest and have committed: from wood workers to a lot of fall décor, actually; a woman who makes decorative glass boxes; and local painters, artists. There’s definitely going to be an added variety of artists at the market that you haven’t seen yet this season.”

That’s in addition to the regular roster of creative types and farm-to-table suppliers normally participating in the summer market.

Fay Bailey of Fay Bailey Designs will be among the artists whose work will be on display next Saturday.

“It’s been very challenging,” she said. “No. 1, because usually the festivals are where I network with people, and I meet people, and I get ideas – and that was all gone. But luckily, I’ve been an artist in this community for a long time, that I still had people contact me to do art. So, I have been painting through this whole pandemic.”

She said, “I’m so excited (for Oct. 10) because, like I said, I’ve been just at home doing my own thing. So, just to get out and talk to people again and see people.”

Giusiana Architects is sponsoring the event.

“I’m proud to continue sponsoring the market, in any form, as it’s such a great attribute and fixture for the Village of Lewiston,” David Giusiana said.

“In general this year, with all the challenges that I faced with the market, I have been truly lucky to have so much support from the community – different businesses that have stepped up through sponsorships, through in-kind donations,” Symmonds said. “Modern being one. I needed a hand sink, but that’s not in the budget for the farmers market to be able to afford that on a weekly basis. So, they stepped up – and that’s a perfect example. And now Giusiana Architects is again another example, who stepped up to sponsor this special Oct. 10 event. I am extremely grateful to this community – and that just speaks, to me, volumes about Lewiston and what we’re about here.”

She added, “Dena Armstrong, who is Sevenson Environmental, she had heard me mention the struggles I was having this year. And one day, a sponsorship check just appeared. And again, that speaks to the type of community that we are, and how we step up and help each other out when we’re in need. So, again, I am unbelievably grateful to all of them, so I could pull this off this year for everybody.”

At the beginning of the season, Symmonds was the one giving back, holding a basket raffle for Brickyard employees. Her fundraiser netted $7,600.

The Village of Lewiston recently approved Symmonds’ use of Academy Park in 2021.

Mayor Anne Welch said, “The farmers market was very successful this year. It was great to see some of our local businesses selling their products, like Brickyard and Sgt. Peppers while their buildings are under construction. A sincere thank you to Jamie Symmonds for promoting and organizing this service to our community. It was nice to have a sense of normalcy during this pandemic. I look forward to having it back again next year!” 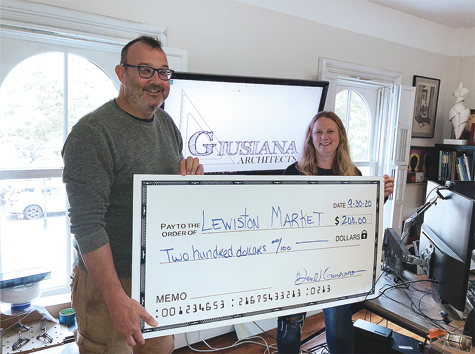