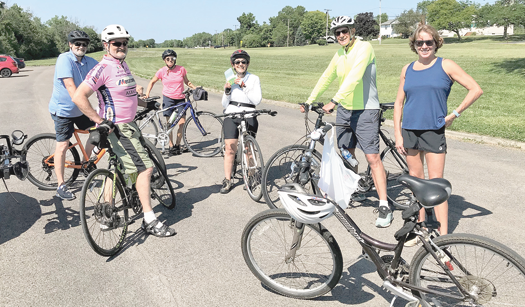 Along the way, Stevens and Sharpe began formulating plans and needed next steps to bring a new industry to Grand Island: ecotourism.

According to the International Ecotourism Society, ecotourism is “responsible travel to natural areas that conserve the environment, sustains the well-being of the local people and involves interpretation and education.” It has also been called “ecologically sustainable tourism.”

“The Town of Grand Island, through all of its planning, has identified ecotourism as a prime objective to be developed through all of the planning on its master plan and its Local Waterfront Revitalization Plan,” explained Sharpe, who has chaired the town’s Long Range Planning Committee for updating the master plan since 2016.

This partnership is timely, as both the LWRP and master plan already call for additions to the existing trail network, and a proposed Trails and Bike Path Committee is currently in the process of identifying which projects are high priority.

“The vision is twofold: Establish Grand Island as an ecotourism destination, bringing visitors onto the Island to enjoy the beautiful waterfront, trails, paddling opportunities and local businesses; and create a bike-friendly community where residents can easily and safely travel to and from the center of the Island to the perimeter,” explained Stevens, whose team is completing a waterfront trail system from the Outer Harbor in Buffalo to the Town of Porter on Lake Ontario.

The first ride for Stevens, Sharpe and their team began at the Whitehaven Overlook parking lot on the West River Connector Trail and traveled north to the tip of Buckhorn State Park, following bike signs along West River Road, over the highway and turning down Grand Island Boulevard to Whitehaven Road and back to the starting point.

“The traffic along Grand Island Boulevard and Whitehaven Road was nerve-wracking at times as it felt like we were dodging traffic. Jim Sharpe provided us with a map of the existing and proposed trails under the new master plan and long-range plans. The Greenway staff is extremely pleased to see Grand Island has been actively working on trail connectivity,” said Michelle Lockett, the Niagara River Greenway’s community engagement manager – and a long-time Grand Island resident.

The second ride went north on East River Road through Buckhorn to the base of the Grand Island North Bridge, and onto the bike path along East River to the bike path that passes through Long Road and ends at Bedell Road. They followed Bedell to Stony Point Road and down Ransom Road to Sturbridge Lane where they rode through the new Scenic Woods Trail.

“This entire ride was very enjoyable with the exception of some shoulder locations on East River that are extremely narrow and force you to ride out into the road at times. The Scenic Woods Trail is an exceptional ride and beautiful to travel through,” Lockett said. “This trail should be our gold standard. The Niagara River Greenway is proud to have been a supporter of this trail and we look forward to seeing it expanded to the Niagara River.”

“I am so thrilled to see all the recent trail developments on Grand Island and excited with the finished product. Niagara River Greenway is all about creating world-class trails and green spaces along the Niagara River. Grand Island has the potential to be a fantastic ecotourist destination!” she added.

Lockett said an action step from its second ride would be organizing an Islandwide community stewardship group that will help maintain the Grand Island trails. Deborah Billoni, a member of the town’s Long Range Planning Committee, and Lockett have begun discussing the makeup of this group and how it will work.

Sharpe said he would also like to see Town Board member Pete Marston serve on the committee as a representative of the Grand Island Snow Mobile Club to ensure it does not use the bike trails.

Bike trails and bicycle traffic on East River Road are popular topics on town social media sites. In a recent Nextdoor Digest post, titled “Who can help with bike path issues,” a resident wrote, in part, “I walk and bike along East River and I do not feel safe. Cars fly down the street well past the 35 mph speed limit. Where are the cops? All the money we pay in taxes and there is glass and rocks on the sides of the road. I’m fed up with my ‘morning dodging”’ of traffic. Make my street safe!” 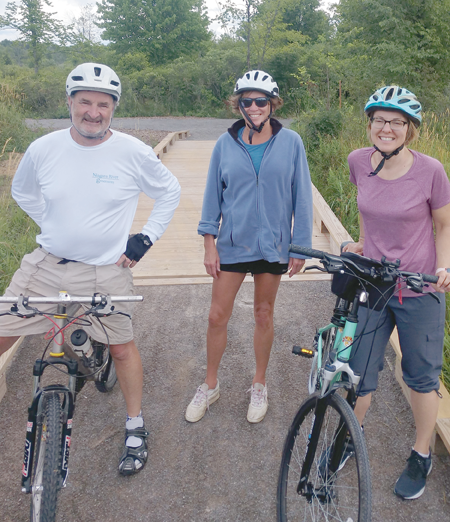