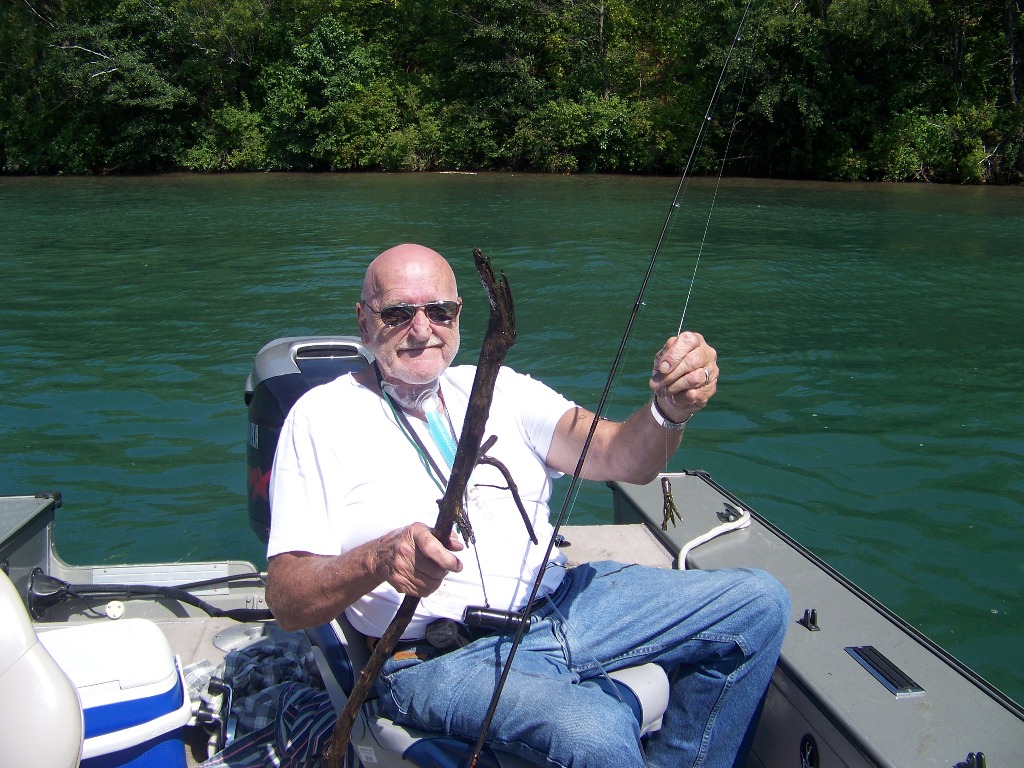 Mark Daul, shown here in his element, was a popular writer for The Sentinel.

‘Take that kid or elderly fishing’

Joseph "Mark" Daul of Youngstown passed away on Thursday, July 16, 2020, in Niagara Hospice House, Lockport. He was born in Niagara Falls on Feb. 1, 1937, the son of the late Francis and Marie (Marguis) Daul. Mark graduated from Trott Vocational High School, and owned and operated Mark's Gulf Gasoline Station, Mark's Tackle Shop and Mark's Diner over the years.

The co-founder of the Niagara River Anglers Association, Mark was the recipient of the "2019 Victor Fitchlee Memorial Award for Lifetime Achievement from the Niagara County Federation of Conservation Clubs. He was a lifelong member of the 3F Club in Lewiston and wrote articles of interest in The Lewiston-Porter Sentinel.

Mark is survived by his wife of 32 years, Delma (Johnson) Daul. He was the husband of the late Joan (McClintock) Daul and was the father of Marc (Linda), Daniel, Joseph (Sharyl) Daul, Joanne (Greg) Olson and Denise Erskine; and the brother of Edward (Geraldine) Daul and Betty Catherine (Armand) Ghiendoni. He has 10 grandchildren and one great-granddaughter, several nieces and nephews. Mark was the father of the late David Daul.

Private funeral services were held over the weekend at the Rhoney Funeral Home in Lewiston. Interment is in Gate of Heaven Cemetery. Memorials may be made in Mark’s name to Niagara Hospice.

Mark, 83, always encouraged readers to get out and enjoy nature. His stories were a popular feature in The Sentinel.

The following was submitted during the pandemic. At the time, Mark wrote, This virus situation is really putting the crimps on everybody for sure. Let us pray everything will be alright.”

My Grandpa and the Canal

I’ve had a lot of time on my hands lately and when that happens, a person’s mind has a tendency to wander. Mine did and it took me back to when I was just a little man, about 4 or 5 years old! Sounds silly doesn’t it? You can bet it does.

It was at a time when I used to stay over at Grandpa and Grandma’s house in Thorold, Ontario a lot. I loved it. Grandma had a garden alongside of the house and it got great care. She watered it early every morning with the garden hose. Where I slept, it was right next to the window and the garden just below it, and when the window was open, I would wake up from the sound of the spray coming from the nozzle.

When I heard that water spraying outside of my bedroom window, I would jump out of bed and go outside and join her. Grandpa worked nights and that was about the time he came home from work. He didn’t have a car and used to walk to and from. When I knew he was due home, I would run out to the sidewalk to greet him coming from a block away. (Besides, he always brought me something in his lunch bucket. It could have been dessert from his lunch or small pieces of smooth cut wood in different sizes and shapes.)

Grandpa was a man of few words. One morning when I was walking home with him, I asked Gramps, “Where are you all night?” He said, “I’m building the Welland Canal.” I had no idea of what a “Welland Canal” was, so I just left that alone. A few years later, I found out.

The Welland Canal is an amazing piece of history and engineering around this part of the country. This 27-plus-mile-long ship canal extends from Port Colborne on Lake Erie to Port Weller on Lake Ontario, near St. Catherine’s, Ontario. There is a 327-foot drop between Erie and Ontario and that drop is overcome by a series of what is called “locks.” There are eight locks total, and they can accommodate ships as large as 230 feet long.

Back when I was just so high, Thorold was a pretty small town, back then. I can remember the big paper mill and a shallow stinky river that came through town. That river floated logs and they were stockpiled for the paper mill and at the time they made large rolls of paper of some kind.

There was a long wooden footbridge that crossed that waterway and there was a firehall, streetcar/bus station on the other side along with some stores. That street was called Front Street and still is today, much like we would call “Main Street.” The street led to the canal where Gramps worked. That wood footbridge was down close to the water and I can remember huge rats climbing in and out of the pile of wood. Maybe they weren’t huge, but in my eyes they were bigger than cats.

Grandpa was one of the carpenters that built the framing and service buildings at Thorold and St. Catharines and other locks along the way. Thorold was No. 7 in the series of locks. There is a museum and an observation building there now, open to the public. When the locks are open for ship travel, you can watch these huge ocean vessels pass through the locks and see how locks work in raising and lowering these 230-foot vessels loaded with things like coal, grains, and whatever else comes and goes to and from different countries around the world. You can even picnic alongside the canal, which makes a great day and a great experience for the whole family.

Grandpa used to bring me those odd-shaped pieces of wood and we would go out the garage (remember no car) and he would show me how to nail these things or glue them together so, when we got done, I had something I was proud of.

Maybe in my subconscious, that’s why I like wood so much today? We didn’t have video games or computers or even TVs back then. Come to think of it, Grandpa had a big floor model radio that he used to listen to the hockey games at night. The Toronto Maple Leafs and the Montreal Canadiens hockey teams were his favorites. I can still hear the blasting from that radio at night now – and if there was a score, Gramps could make the whole house to rock. Those games were intense.

In the early days, the canal had a lift bridge that allowed the ships to pass under. When there was a ship coming through the canal, everything stopped as it was coming through the locks. Pedestrians had to stop and wait, and the same with vehicles. The bridge roadway, (Highway 58) sidewalks, railings and street would raise straight up. No one crossed until the ship was through and on its way. It was a pain in the neck for motorists, so, about 1965, the government built a tunnel underneath the canal waterway so vessels could pass over the top of anybody or anything that wanted to cross.

It is a weird feeling for the first time driving under a big body of water with lights so many feet apart and still dark under there. It doesn’t happen now, but in its earlier days, the tunnels walls leaked water and many people were scared and wouldn’t use it. No problems today.

Naturally, Grandpa never got to see the finished project, but I did, and it is an amazing feat – plus I advise anyone who would like to know more about local history, take a day and a little short ride to Thorold or St. Catharines. Take a ride through the tunnel at Thorold, toot the horn, let the kids know they are under all that water (and maybe a huge freighter), and go up top to check how the locks work and see the buildings Grandpa had a hand in building!

There is an observation building there with an attendant to answer any questions. Daily ship schedules are available by calling the St. Catharines Museum & Welland Canals Centre at 905-984-8880 after 9 a.m. daily, on Twitter, or through the Great Lakes St. Lawrence Seaway Vessel transit information page. The canal is open from end of March through December each year.

Mark also took a moment to comment on the local food industry.

Instead of that steady diet of pizza you can get delivered to your door, there are so many of the finest restaurants in the area that you can get fish fries or sandwiches from in our neck of the woods. Remember, 95% of our fish around here is fresh haddock, at least the No. 1 bestselling fish dinners. Go down south and you can’t find it there – or even go east or west, you are out of luck.

Right here in Western New York, you will find it almost anywhere they have fish fries. Western New Yorkers know the best. Look at our chicken wings, or beef on weck, even our beer is better. Local, craft beers, imports or Canadian. Licensed restaurants can even sell you a six-pack of beer to go with your dinner. You will pay a little more than a store will sell it for, but what the hell, it’s there; it’s convenient; and it's cold.

Call your favorite restaurant now, and order that fish fry or whatever. Some will deliver to your door, or bring it out to your car for you. Remember: If we all stick together, we can stay together as one big local family. Buy local!

Our blessings go out to the people and servers that make this all possible for us. Thank you from the bottom of our hearts. And, readers of this column, let me remind you, this is a time to show your appreciation for what they do. Leave a decent tip and thank them from the bottom of your heart. Remember, they don’t have many other customers except a few. And always remember and respect your other public servants that are keeping you safe and sound throughout this turmoil.