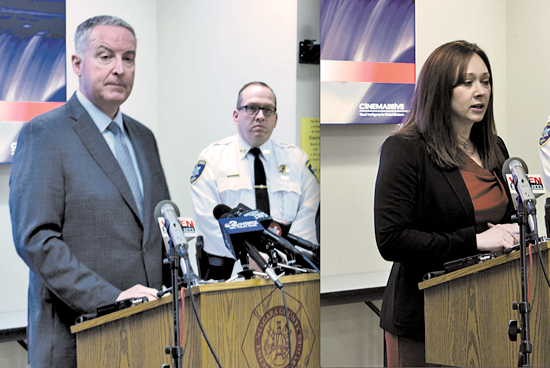 At a press conference held at the Public Safety Training Facility in Lockport, Stapleton said the patient was a 42 year-old woman with a compromised immune system. Wydysh eventually confirmed the woman was currently being treated in isolation at Niagara Falls Memorial Medical Center. Stapleton said the patient followed all of the proper procedures before being admitted, ensuring that medical staff were prepared to handle the case.

Few other details were given about the patient in an effort to avoid breaching the person’s right to confidentiality. However, Stapleton said this case was not contracted through travel, rather officials believe her case was caused by community spread. Officials are currently performing “contact tracing” to look into people and places that may have come into contact with the infected person.

At the time of the press conference, Stapleton said there were 22 people currently in precautionary at-home quarantine in Niagara County, none of whom show any sort of symptoms. Additionally, the county is currently awaiting the results of four pending tests.

Stapleton outlined a number of measures the county is implementing to help to tackle the issue. He spoke briefly about the recent agreement between Eastern Niagara Hospital and Niagara County to use the former Newfane Intercommunity Hospital to house quarantined individuals. He said the facility could hold 32 people and would be ready to go today if necessary.

Stapleton even insisted after the press conference that drive-thru testing sites were all but ready to be rolled out. However, the major hurdle the county is facing is a lack of testing kits.

“We expect that there are a number of positive cases that have not yet been identified due to the lack of available supplies to do testing,” Stapleton said. Elsewhere, he added: “We have difficulty being able to provide more than, say, a half a dozen tests a day.”

Stapleton said the county had previously ordered over 1,500 swab testing kits from the state but that they are currently on backorder. He said there has been very little in the way of assurances or timelines from state officials, saying the county has merely been told that it is “in the queue.” When asked by a reporter what that means, Stapleton shook his head and responded, “Exactly.”

Elsewhere, Stapleton stressed the proper protocols people should follow if they believe they have symptoms of COVID-19. People are urged to call their primary care physician, or the county Coronavirus hotline at 858-2929. There’s also a state phone line at 1-888-364-3065.

Stapleton reiterated that people with symptoms should not go immediately to doctor’s offices or an emergency room without direction from health care officials as it could spread the virus to those environments.

Wydysh also announced that this would likely be the final in-person press conference regarding COVID-19 in attempt to avoid gatherings of more than 10 people.