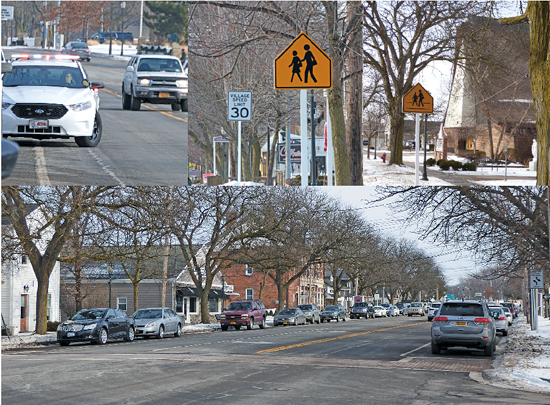 Local elected leaders are again making a push to lower the speed limit on Center Street, from 30 miles per hour down to 25 mph.

Prior to Tuesday’s Village of Lewiston Board meeting, Trustee Dan Gibson said, “People pass you down the middle of Center Street because they’re in a … hurry to go to work.”

“You got a guy now that blows off the stop sign at Fourth and Oneida. Blows through this red light. All so he can get to the coffee shop,” he added. “He pulls up every single day. Just drives right through it. Doesn’t even bother to stop.”

“That’s crazy,” Gibson said. “We’re going to have a fatality. It’s going to happen again. We’ve got to slow this street down – somehow.”

“I think that, as far as the pedestrian traffic that we have in the community, and the number of crosswalks, and the people that we have in the community, and the fact that this is as congested as it is, I think 30 miles an hour is too fast,” he told The Sentinel. “I think it does not give enough time for people to react. I think it is an accident waiting to happen. I would agree with that; because, if you step off a curb and you don’t see something and you miss something, or people that are driving in the street aren’t educated enough and aren’t familiar enough to know that pedestrians have the right of way if they’re in the crosswalk, the reaction time for that, at 30 miles an hour, you’re talking about quite a big distance for that.

“I’ll tell you, when I drive up and down Center Street, I’m going – I’m sure I’m aggravating people behind me, especially when I’m in my police car, but they won’t pass me, of course – I’m going 23. And that is about where I feel comfortable, where I think I can stop safely if somebody jumped out and I had to react.”

A fatal accident occurred in the spring of 2014, when a pedestrian was struck and killed while traveling a Center Street crosswalk.

The roadway is state property and so, at that time – and almost every year since – the Village Board asked the New York State Department of Transportation to lower the speed limit. Correspondence began with former Mayor Terry Collesano and has continued with Mayor Anne Welch.

Though the DOT acknowledged this incident, its regional traffic engineer, Thomas Messana, wrote the Village of Lewiston and said a change in the speed limit isn’t warranted.

“In the case of Center Street, the 85th Percentile Speed was found to be 32 MPH. The 10-Mile Pace was 26-35 MPH with 84 percent of the traffic within the pace. We also reviewed the accident history from the most recent three years of data available and did not find any indication that there is an issue with pedestrian safety which would necessitate a 5 MPH reduction in the speed limit. Therefore, considering the data we have obtained for this area, we have determined that we will not reduce the existing 30 MPH speed limit at this time.”

The next year, St. Peter R.C. School petitioned the DOT for a speed limit reduction in front of the church. A letter from then-pastor the Rev. Monsignor David LiPuma and Principal Maureen Ingham stated, in part, “While most of our students ride to school in either a bus or car, we still have several students who walk on these streets to enter and exit the school building. Our students range in age from 3 to 13 and their safety, at all times, is our number one concern.

“As Center Street becomes increasingly busy, we feel compelled to make this request to you in the hopes that all motorists will drive more slowly and cautiously in this child-friendly zone.”

This request also was denied.

Messana responded with a letter that stated, “It is the policy of the New York State Department of Transportation to establish a school speed limit only on roadways which are directly abutted by the school property. St. Peter’s School property does not abut Center Street; therefore, we have determined that we will not establish a school speed limit on Center Street.”

Collesano was not happy with this reply.

“It is the Village of Lewiston’s sincere belief that a speed reduction on Center Street would be in the best interest of our citizens,” he wrote. “The Village of Lewiston has become a destination and a walking community. Every day throughout the year, citizens are walking on our sidewalks and using our crosswalks. We have heard several times that Center Street traffic goes too fast.

“The Village of Lewiston does not find your answers to our request to fit the needs of our community. We would hope that you will reconsider our original request to lower the Center Street speed limit from 30 miles per hour to 25 miles per hour.”

Messana would reaffirm, “The 85th Percentile Speed and the 10-Mile Pace are the predominant factors in determining the appropriate speed limit, and in the case of Center Street, these both revealed that 30 MPH is the correct speed limit. However, our data also indicated that 25 percent of traffic is exceeding the posted speed limit; therefore, we suggest that a stricter enforcement of the existing speed limit would provide a safer environment for pedestrians.”

Not getting anywhere with the DOT, the Village Board opted to request a “home rule” change via the New York State Legislature. Trustees approved a resolution to lower the speed limit, and then sought the assistance of Sen. Rob Ortt and Assemblyman Angelo Morinello. 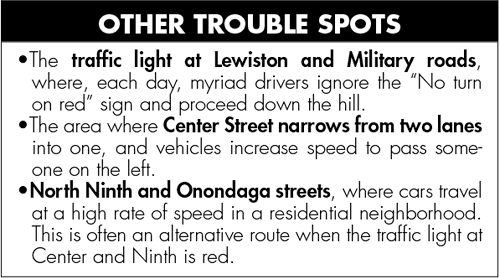 What is Being Done

A “home rule” is a request by a local government for enactment of a special law.

The Ortt-sponsored Senate bill 289 was passed in 2019. In an email this week, the senator said, “Ensuring that pedestrians can walk through the Village of Lewiston safely has its benefits from both a public safety and also an economic standpoint. We want to encourage residents and visitors to park their cars, travel Center Street by foot, and visit businesses with the peace of mind that they are able to do so in a safer manner. If the village believes that lowering the speed limit will help achieve this, then I support their efforts.”

Morinello’s companion bill did not pass. On Wednesday, he told The Sentinel, “I am going to work as hard as I can,” to convince DOT to make the requested change in 2020.

“It is still live in the Assembly. It’s still here and I’m still working on it.”

Morinello noted part of the delay is because the DOT is waiting until the Ellicott Development plaza is built and opened – which is expected this spring. A second village request to the DOT asked for a traffic light at Eighth and Center streets to better accommodate what’s expected to be a large influx of vehicles at this new site.

He added, “When it comes to a state highway, the DOT needs to get involved. And at the time we asked them, there had been ... one fatality in 2014. They had no other information; and they didn’t feel it was warranted to go through the study at that time. So now, what I’m going to try and do is work with them to include it in the study for the light. But they’re not going to do the study for the light until the plaza is done, so they can see the traffic patterns.

“It’s a long-term work in progress, but the bill is live.”

Morinello noted, “Home rule will not supersede DOT on a traffic matter.”

“I’m trying to (work with) DOT, but the problem is we just started the (legislative) session. It was just reintroduced, and we’ve been consumed with State of the State and the budget. Now that those are done, we can start focusing on other things,” he said. 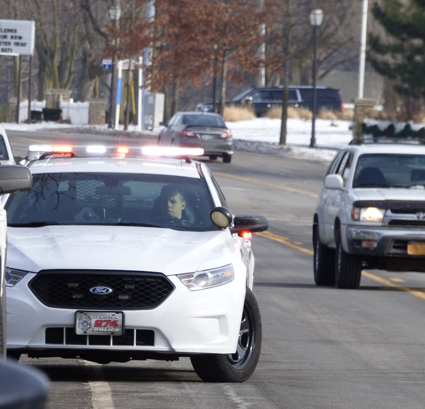 While the Village Board waits – hopes – for a different DOT verdict, Gibson said action can be taken now to curtail irresponsible driving.

“I think if we have a police presence, that’s running radar – and in different spots; not always sitting in the same spot every morning – I think up near Tops doesn’t solve the problem. Because they’re coming to an intersection, to a light. But if you’re down in the middle of the street, between Sixth Street and Portage Road, there’s no street lights there. There’s no signals. So, they can get a good run going up that hill. They’re passing people in the middle of the road, turning up North Fourth here.

“It’s crazy. They’ve got to slow down. Something bad’s going to happen, because there’s a lot of people out walking. With the weather being as nice as it’s been, we still have a lot of pedestrians out there early in the morning walking. People walking their dogs. I just feel that it has the makings for an accident.”

During the board meeting, Previte said, “I have a traffic car now, so I encourage the board, if you’re hearing complaints about speeding – I realize there’s a lot of them – a lot of them have to do with stop signs or speeding – just make sure you call the office, because we’re going to document all of that; and assign a traffic car to that, as well.”

Gibson suggested patrolling the area between the CVS and Rite Aid plazas.

“They’re at peak speed there,” he said.

“I worry a little bit about right by Orange Cat there, because people are zipping through. And other people are trying to go in and get a cup of coffee before work. That area, maybe just slow people down a little bit,” Welch said.

“I think it’s pretty much the whole street,” Previte said. “My officers are pretty busy in between, and we do a lot on Center Street – especially with the red lights; it’s always a plus one or two. As soon as that light turns red, there’s at least one or two (that pull through).”

Previte said his department will continue to educate the public on safe driving procedures – and ticket those who disregard the laws.

“It’s a question of a combination of both of those,” he said. “We’ve tried to do the education. … Doing stuff as far as public safety, and letting people know about the different laws, and the dangers and the hazards that exist. …

“The problem is, in times past, I haven’t had the funds all the time to enforce that as well. I have a little bit more of an opportunity to change that this year, but, again, it’s cyclical. I can put a sign out there and people slow down for a week. And then I take the sign out of there and, after a week, it’s pretty much back to business as usual.

Previte said the difference in stopping distance at 25 mph instead of 30 mph is “significant.”

A number of traffic websites suggest vehicles require an extra 17 to 20 feet to brake at 30 mph. The New York Police Department posted a DOT graphic on its website, and noted vehicle stopping distance improves by 45 feet when travelling 25 mph instead of 30 mph. 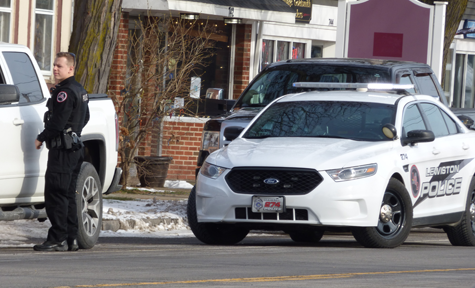