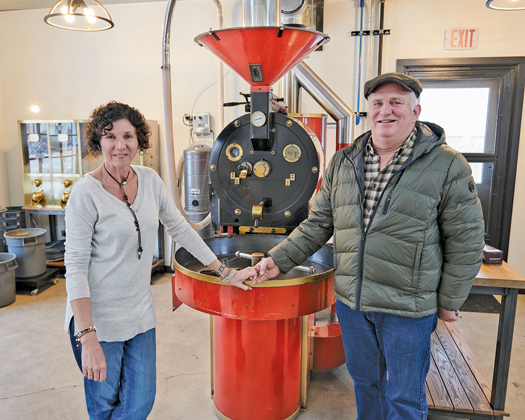 Is there anything better than a fresh cup of coffee? According to disturbmenot.co, 66% of women and 62% of men drink coffee every day in the U.S., and Brazil exports 5.7 billion pounds of coffee every year. That being said, does the average coffee-drinker grind their own beans, and if so, where are they roasted? Is there any difference between freshly roasted coffee beans and imported pre-roasted ones?

Buffalo Coffee Roastery hopes to solve this question by roasting, grinding and selling fresh beans from around the world in the hamlet of Sanborn, at 5844 Buffalo St.

“Twenty-five years ago, we started in downtown Buffalo at the Main Place Mall,” said Sean Edwards, co-owner. He describes himself as more of an onlooker to his wife, Kate Edwards, who really runs the business. “Then she acquired a roastery in the bottom of the Liberty Building and she ran that for 12 or 13 years. Then two years ago, when she finally was getting tired of the hour commute everyday. …”

“Sixty-mile round trip and we lived in Sanborn,” Kate said. “I was ready to slow down. So, we sold the café part of it and brought the roaster here with us. We had some wholesale accounts, so we said, ‘Let’s just do that. As long as we’re wholesaling and have coffee here, we’ll sell by the pound to the public.’ ”

Kate credited her sister on the West Coast, now open for her 40th year in business, for activating the coffee bug in herself and her husband. They decided to go into the café business, and from there things just started brewing.

“We have a broker in Staten Island, so they do all the importing,” she said. “We get about 10 to 12 bags on a pallet every month. Most people have no idea there’s a coffee plant that produces cherries or that the coffee bean is the seed inside the coffee cherry.” 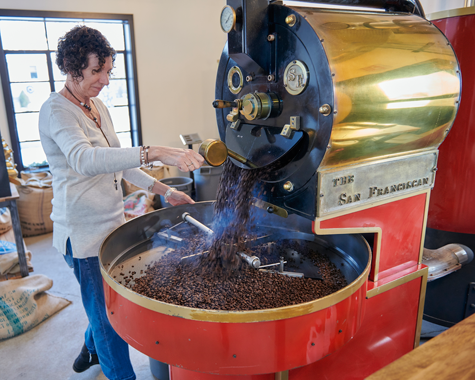 The present-day iteration of Buffalo Coffee Roastery features a large contraption in the middle of the space that is quickly identifiable as the business’ key component.

“This is the roaster. As you can see, they roast in the drum, and then they cool off in the tray,” Kate said. “The interest in it, lately, is because I think people are into the artisanal quality. They like small places and small batches and local people running them. I think they’re just into that, rather than the big bulk coffee like Maxwell or Folgers. We were the first on-site roaster in Buffalo with an in-house café.”

All of the bins and roaster in the shop are made of brass and painted red and gold, giving a warm feeling to the small space, Kate said, which is also taken up by the large burlap bags of fresh beans.

“It’s an experience; so, even though we’re not serving, it’s still a pretty place to look at,” Kate said. “Downtown it was like 500 or 600 people a day we served; it was a busy place, but we wanted to slow down.”

Kate noted about 60% of her customers are local and they would come around as she made out orders for internet and wholesale customers.

“Oh yes, even in this hamlet, they are very loyal,” Sean said. “It is the best-kept secret in the county. I’m not around much; I just deliver and fix things – that’s it. We originally started the business for me. I’m a plumber and I had a bad back, right? So, long story short, the first three days we were open, I was crawling the walls! So, I got the call to go back to work and I jumped on it and she’s been a happy camper ever since.”

“I came from the medical field. I was an X-ray ultrasound tech for 15 years. I wasn’t going to leave that, but we didn’t make this big investment to stop,” Kate said.

“It’s crazy, at the time we had just built our home, we didn’t have a lot of resources,” Sean explained. “We had to sign our home … our life insurance policies over to the bank to secure the business loan. … She worked for five years with no paycheck.

“She paid that loan off in five years, and I’m proud of her for that. She opened two stores – she’s been very successful – but the biggest secret is she’s the best on the East Coast as far as being a master roaster.

“A lot of the new roasters, they have processors, they’re not hands-on like my wife. She’s got 27 years of hands-on. Her coffee is unique; nobody can compare to it.”

“This is specialty coffee,” Kate said. “The quality of the beans, all of that.”

The couple also sells online from the company’s website: www.buffalocoffeeroastery.com.