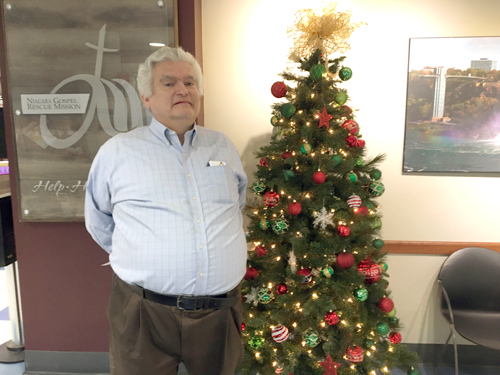 David Houghton, development director of Niagara Gospel Rescue Mission on Portage Road in Niagara Falls, stands next to Christmas tree at the entrance of the shelter.

The mission does this twice a year, once on Thanksgiving right into the December holidays, but it can’t do it alone, according to representatives at the mission.

“For the volunteers for the Pie Party, (we need) roughly about a 100,” Chaplain John Bornhoeft of NGRM said. “They’re a pretty decent sized church, so a lot of their members will be there. It’s open to anybody that wants to come. … The way to get in is you got to bring a pie.”

“One of our biggest group supporters is our partner churches, we have about mid-40,” said David Houghton, development director of NGRM. “We don’t take government funds, it’s all from individuals, businesses or churches. This is one example where we really appreciate our supporters and donors.”

“It’s what God has called us to do,” Bornhoeft said.

After having pie, the next round of good work comes on Christmas morning.

“We start having volunteers coming in at 8 a.m. and they will start scooping up and traying Christmas dinners that will be delivered starting at 10:45 a.m.,” Bornhoeft said. “We’ll have about 80 to 90 volunteers that will come in and they will tray the meals, we have about 10 or 12 people in the kitchen, and roughly 25 drivers/deliverers in teams. The meals are delivered to anyone who calls the hotline. No questions asked, just call 253-1463.”

Houghton said, “I think it’s important to tell you: we do these two flagship events, but we will have served, by the end of December, over 30,000 meals. In house for breakfast and lunch, but the public, women and children, are welcome for dinner. If you add all those together, including themed fall meals, that’ll be over 30,000 from the first of the year.”

The Niagara Gospel Rescue Mission was just a concept in the fall of 2006, according to its webpage, when the need for emergency shelter care in Niagara Falls was finally made clear. There was an alarming increase in homelessness, cases of addiction, and a lack of shelter beds in the community. By spring, 2007, NGRM was founded and began its services.

“It started off serving soup and sandwiches on a street corner on 19th Street out of two vans and an RV,” Bornhoeft said. “It went from a street corner ministry to a basement ministry where they had a kitchen and clothes closet, Bible studies. From there it went to a house on Ferry Avenue. That’s where the mission really started blossoming.”

In 2015, the ministry bought the old YMCA on Portage Road for $1, Houghton said, and there are plans to renovate the gymnasium as well as a separate wing for a women’s shelter.

“These things are not happening in a few months, but we’re talking about it,” he said.

In the meantime, the shelter helps put lives back on a stable track.

“We have transitional housing here, let me start with that,” Houghton said. “On the third and fourth floor you can get a locked room. It’s $325 a month, but all utilities are included, people can still eat free, here. WiFi is included. That’s for folks who generally are not ready to be completely out on their own.”

The mission also hears about programs and agencies that can help the people coming into its doors.

“We do partner with a lot of agencies: social services, Trot for Jobs, the hospital for health issues,” Houghton continued.

“We do help gentlemen out as much as we can,” Bornhoeft said. “We are a small mission and we do the best that we can to get guys moving on out. We want guys to rent a room upstairs, because they’re in some kind of recovery, they’re in mental health and they need to be stable. … They can focus on things that they need to do for their lives.”

“There’s a lot of organizations that are popping up little by little, and a lot of people don’t know about them, but we do. These are places we can get into,” he said. “We talk with our clients, once a week and go over their plans. When we start talking about that, we can direct them where to go.”