Crashing and hacking and Disney+, 'Oh my!'

The long-awaited streaming service from the Walt Disney Company finally arrived on Nov. 12. Disney+ has come and people’s lives seem to have been changed for the better. The app has anything and everything a Disney fanatic would want. There is everything from classic Disney animated films like “Alice in Wonderland” to series such as “Boy Meets World” to most things Marvel Cinematic Universe and “Star Wars.”

Disney+ has been referred to as a nostalgia trap and it could not have come at a better time. As the weather starts to cool down, people are starting to stay indoors more to shelter themselves from the harsh conditions of what might be happening outside.

“I don’t think other streaming services have yet mastered the feeling of nostalgia that Disney+ has achieved so quickly,” Dana Sapp, a mother of four, gushed about the service. “There is just something so different and unique about the experience the app creates; it’s like going to Disney World, but remaining in the comfort of your own home. It gives the same warm feeling that Disney World gives.”

Sapp said she is so excited to have the opportunity to share her Disney memories with her children.

The service seemingly has something for everybody. Because the Walt Disney Company has become such a large media conglomeration, it has access to just about anything. A customer on the app has access to most Disney Channel Original Movies, as well as Disney blockbusters. There is a Pixar section that has movies and also short films. 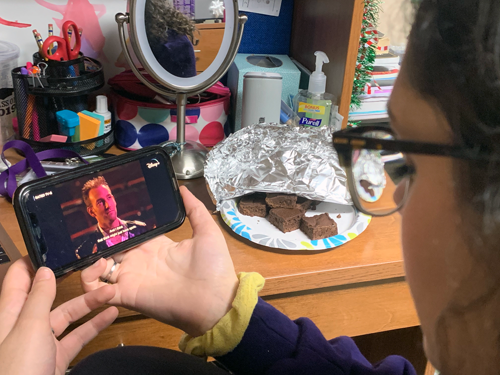 A Niagara University student enjoys a night in while binge-watching "The Cheetah Girls" on Disney+.

The presence of the Marvel Cinematic Universe is also very heavy on the app, along with “Star Wars.” The movies are all there and directors are also making their own content within those cinematic worlds. There have been many announcements by Marvel about original series it is going to launch, including, “The Falcon and the Winter Soldier,” starring Anthony Mackie as Sam Wilson/Falcon/Captain America and Sebastian Stan as Bucky Barnes/Winter Soldier. One of the “Star Wars” original series, “The Mandalorian,” is already getting a lot of buzz because the presence of one Baby Yoda.

Disney has also generated talk by having its own original series being introduced, including “High School Musical: The Musical the Series” and “Encore!” The users seem to be thoroughly enjoying the original series.

The app also contains “The Simpsons” series and most things made by National Geographic, including a new series by the name, “The World According to Jeff Goldblum,” which has new episodes premiering weekly.

Unfortunately, the launch of the Disney streaming service was less than smooth sailing.

When the website and app went live on Nov. 12, right off the bat there were quite a few issues with the service. Due to the large volume of people signing up to start streaming, the servers seemed to crash pretty early in the process, and the app was unavailable to a lot of people who wanted to start their nostalgia binge. Even the customers who prepaid to have access were struggling to access the service.

A lot of the users went to Twitter to voice the frustrations they were having because the app was not working. Disney+ Twitter account took to the site telling customers that technicians were “quickly working to resolve any current issues,” so that users could swiftly get back to streaming.

On the same day the app launched, many users reported their accounts were being hacked. They were notified with emails that the password to their account had been changed and they again took to Twitter to voice their frustrations.

“One the one hand, I’m kind of concerned about my account getting hacked, because it’s a real thing that can happen. You hear all the time that Facebook has gotten hacked so many times, and saying that Disney got hacked is not gonna make me stop using the app to watch the movies.” a self-proclaimed Disney freak, Kacie Conti, decided. “I feel as if, somehow, I have the Infinity Gauntlet of streaming, because I also have Hulu, Netflix and Amazon Prime. Sometimes, though, the Disney+ doesn’t work on the Wi-Fi at Niagara, which is frustrating, but other than that, I often stay up binging until 3 a.m.”

Allegedly accounts are being hacked and sold for as little as $3, which is $4 cheaper than the rate that Disney is charging monthly. Owners are being locked out and hackers are changing their credentials.

Disney has looked into the alleged hacks and has stated it found no evidence of a security breach, but it is still going to look into it.

So far, Disney+, the long-awaited streaming service, is far from perfect, but still, people love it. It has everything they have been waiting for such a long time.

“I am enjoying the app, so far. On the first day, it didn’t work on my computer, but it worked on my phone,” Tia Robinson explained. “I think they definitely are missing a few shows, but other than that, I’m pretty much enjoying it. I watch it when I can, when I have time.”

“I don’t really mind that the app seems to be having so many problems, because it is literally so worth it. The price is so reasonable and there is an insane amount of content that just became so much more easily accessible,” Do’Monique Clay said. “I couldn’t be happier with my purchase and I, personally, can’t wait to share it with my friends. It’s so exciting and I got it just in time for the new year.”