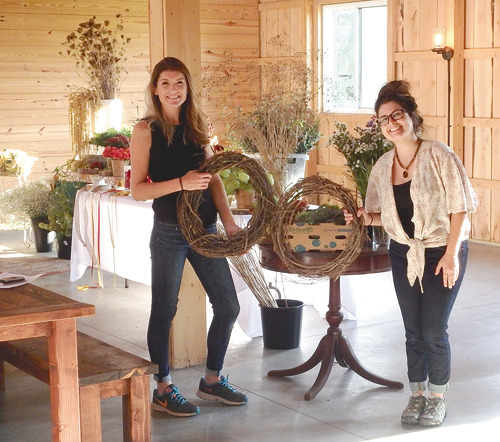 Kin Loch Farmstead is a sprawling, 37-acre plot on which Alex and Ryan Plante cultivated 2,000 lavender plants in 2018 and traded some growing space to Fran DePalma of Heirloom Soul Flowers. Since that time, the farm has outperformed expectations, receiving over 1,000 visitors during the summer who picked the freshly blooming lavender plants, take classes and experience country life.

Kin Loch Farmstead has just announced its classes for the fall and the Tribune was lucky enough to attend one of them earlier this week.

As people began to arrive, Alex put out a table of cheese, crackers, scones, cupcakes and grapes for them and approximately 25 people filled the barn. Before beginning the class, DePalma asked everyone to introduce themselves and, as it turned out, many of them had signed up with a friend or family member to do something special on a Tuesday night.

DePalma got right into the different flowers and herbs, as well as ribbons that could be used to decorate their wreaths. The Tribune, like everyone else, gathered the different plants and started experimenting with colors and consistency to make a simple autumn wreath, the kind seen on people’s doorways.

“Just grab what you like; grab what you’re gravitated to,” DePalma said. “You don’t have to grab one of everything. If you take it and you decide you don’t want to use it, you’re not pressured to use it. Follow your instincts and I will show you an example of what I made, or continuing to try to make. I gravitate to things that are asymmetrical. If you want to cover up the whole wreath, you absolutely can.”

As recently as three years ago, the Plantes were living in New York City; working hard in their professional fields. Alex said, they just had a dream about trading those corporate fields in for some natural ones.

“We moved up here about three years ago,” Alex said. “Before we even moved, I wanted to do this, but living in New York, obviously I couldn’t. I knew I wasn’t going to be in New York forever; so, it was kind of in the back of my head that, whenever we move out of the city and had kids, I wanted to do something like this. Sure enough, we were living in Brooklyn, we had a kid, we were like, ‘OK, we’re going to move now,’ and as soon as we moved to Buffalo, we started to look for farmland.” 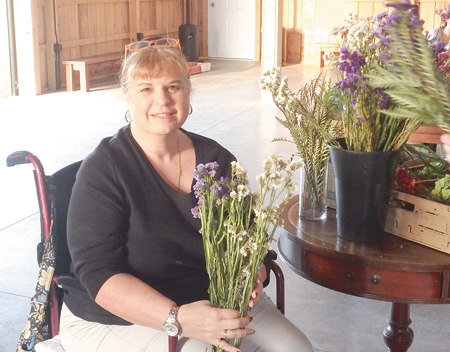 The barn was full of people learning how to make fall wreaths. Some students are shown here working with different herbs, grasses, and flowers to decorate their wreaths. 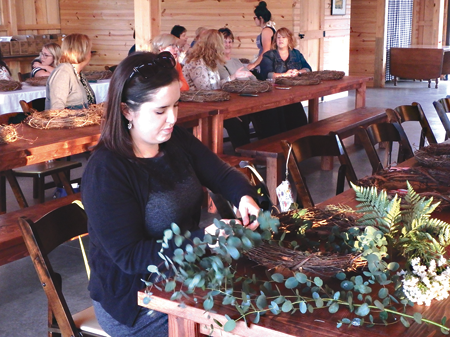 Alex said she was really worried no one would come during the U-pick lavender weekends in July. She forecasted about 50 people would show up, but, as it turned out, over 1,000 people did. The lavender picking season lasted only four days, because there simply wasn’t any more lavender to pick.

“It would’ve been open longer,” she said. “We sold out of all our products, we sold out most of our lavender; I couldn’t open for the last weekend because there just wasn’t enough. It was totally successful!”

“Doing these workshops are one of my favorite things to do, because it’s small and intimate, fun,” Plante said. “I just feel it’s a cool thing to offer and be a part of. We’re just trying to work out the kinks on what people are interested in.”

DePalma explained a little about fall wreath making, and how she ended growing her flowers and her own business working with Kin Loch.

“I love growing flowers, I chose this,” she said, laughing. “I just decided I wanted to be a flower farmer.”

“We were living in Chicago, which we loved and miss, but my husband had family in Buffalo, so, we moved here and actually got married here at Kin Loch, two weeks ago,” DePalma said. “I’ve been growing urban vegetable farms for seven years before this. When I moved to Buffalo, I didn’t have a job, and just decided to start a farm. So, I actually met her (Alex) on Craigslist. She was looking for a farmhand and I was looking for land. I’d posted an ad saying that I didn’t know where to find farmland to grow flowers. But if you’re a business, I can set up a garden for your employees; or if you’re a household I can redo your landscaping for you; or if you’re a church I can grow food for your soup kitchen; in return for a place to grow my flowers. … I was trying to barter. … Alex said, ‘We’re going to build a wedding barn and we wanted to plant flowers, so why don’t you just plant your flowers here?’ and it’s been working out.”

DePalma makes her living growing, cutting and arranging flowers for different events. She said this was her first fall wreath-making class, but she has experience educating in schools about how to grow food. She was recently asked by the Cornell Cooperative Extension to speak at a cut-flower conference about how to differentiate as a farmer and how setting up workshops compliment actually growing the flowers and making more of a living.

To learn more about Kin Loch, the classes it offers, and the event space they supply, take a look at their webpage www.kinlochfarmstead.com.